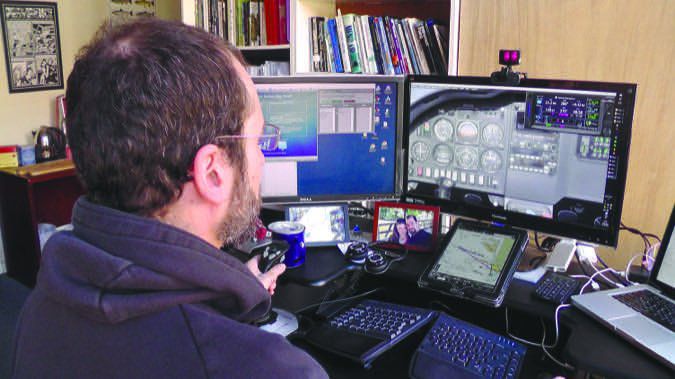 I just got around to trying Jeff Van West’s IFR Sim Challenge from the Feb. 2017 issue.

It’s great! Many of us use desktop simulators like Prepar3d to practice instrument procedures. This makes it really challenging in a useful way. Please keep up this feature. I’m sure it will only get better as you work on it.

I would like to know if Microsoft Flight Simulator can be used in these simulations. If so, are there downloads to facilitate the scenarios?

Any kind of simulation can be used. Clearly, they’re designed to be flown with a simulator, but that can be a DIY system all the way up to a Level D airline sim. The platform doesn’t matter. We’ve even flown them simply using Garmin’s GTN/G600 PC trainer, which isn’t really a simulator, but still lets you “fly” a scenario.

As noted, you can also use the “simulator of the mind,” meaning you can just arm-chair fly them to mentally walk through all the nuances.

So, yes, you can use MS FS. No, we don’t offer any downloads; just set it up as you would in a real airplane and try to fly it.

I believe that the two most damaging circumstances that are negatively impacting piston GA are the overkill lock-down of airports by Homeland Security and the gradual elimination of free access to airports due to control by the large FBOs.

There is not much we can do about fighting Motherhood, Apple Pie and Big Brother to lighten up the restrictions for access and this is the cancer most likely to eventually kill us.

The other cancer, just as bad but less obvious, is the limited access to airports near population centers. No longer can young people (future pilots), middle aged prospective GA pilots, and “old geezer” pilots like me, access the larger airports to hang out at the hangars for shop talk and fellowship.

The FBOs with their restrictions and onerous fees make just visiting these airports too much trouble for most of us. Over the past 15 years, I have watched airports such as Santa Barbara, San Jose, San Diego, Palm Springs and numerous other Class C operations institute landing fees, handling fees, security fees and fuel prices typically much higher than more remote airports.

As a substantial taxpayer, I am seriously disturbed by the fact that the airports and FBO’s receive Federal tax subsidies and then the FBOs are allowed to charge me for services that are free at most smaller airports. Why do they think that’s acceptable?

So access and affordability are two big factors in forcing the prospective pilot population to bypass flying as either a vocation or an avocation. Unfortunately, there is little or nothing anyone can do to overcome these forces that are contributing to the demise of our favorite means of travel.

It has been wonderful while it has lasted. I consider myself extremely fortunate to have been a part of piston GA for the past 3000 hours of sheer joy and pleasure and to have experienced the ultimate freedom provided by private flying.

While I agree with your assessment for larger airports, those fortunately are still in the minority.

I recently flew to visit a friend in Grand Island, NE. Grand Island has a nice airport (KGRI), and the fuel—$4.80 at the time—wasn’t badly priced. The airport has regional airline service, but there are no landing fees or even ramp transient overnight fees. This looked like a decent place to leave my airplane for a few days. Nonetheless, looking around a bit, just a few miles east I found Aurora airport (KAUH) with adequate instrument approaches, a long enough runway for my needs and—bonus—fuel at only $4.00 a gallon.

Aurora, NE is a nice little airport, but it’s largely unattended. There are services available, but certainly no “follow-me” cart. I called ahead to inquire about fees. The friendly airport manager answered the phone and said there were no fees. I landed and stayed there. My friend drove right through the gate that looked like it had been open since the Eisenhower administration. Mine was the only aircraft on the large ramp; all the residents apparently have hangars.

My point? Yes, many larger airports are getting to be out of reach—and nearly out of bounds—for piston general aviation. And that is a serious restriction that’s also a serious inconvenience. But, if you look beyond those, you’ll find ample fields that are as reachable today as the day they were built. —FB

I enjoyed your March Remarks, “Too Little, Too Late,” immensely. I would like to mention to you what I think are two top factors leading to the death of general aviation.

First is the death of boredom. Before you dismiss me as a crank, just follow my reasoning. When I was growing up on the farm, there was absolutely no ready-made entertainment after your work was done. None. As my mind wandered, I found that inner thrill by cloud-gazing and imagining what it would be like to fly among them like the hawks. Yes, it would be a long road, but there was nothing else available vying for my attention. Now young people can escape boredom by sitting down at their computers and transporting to another world, where excitement and stimulation are instantly available.

The second is America’s culture of work. We work harder than any other culture, with longer hours and more days. Before I retired, what precious little time I had, I tried to spend with my family. Aviation is not for dilettantes, and to be all-in requires money and more importantly, time we Americans just don’t have any more.

Y’know, I’ve had thoughts like that bouncing around in the back of my mind for years, but I’ve never articulated them as clearly as you did. Thanks for that, James. I completely agree. We both must be cranks. —FB

Not An Apple Fan

Why aren’t there more flight programs made for the Android or other operating systems? My Dell Windows 10 tablet with 11-inch screen can handle anything the Apple can do and probably better. I’ve absolutely had it with Apple and will never darken their iPad again.

Here’s why: On an overnight flight, I plugged in my iPad to charge it as I normally do and accepted an offered operating system upgrade. The next morning we were to leave but the iPad was dead. It had been plugged in all night but the charging cord wouldn’t work after the upgrade. It seems like there is a chip in an Apple cord that is needed now. My $3.00 generic cord that was totally satisfactory in the past would no longer work after the software upgrade.

I found an Apple store and was told that the recent upgrade put in a “feature” to prevent “inferior” cables from being used. My interpretation of that statement was they want to strong-arm customers into overpaying for what in the rest of the industry is a simple and cheap cord.

The purpose of this letter is to warn others about this ruse of Apple so they can avoid the troubles I experienced. With ADS-B mandates out now, a lot of systems require a tablet, and I am not sure what in-flight software will work on something other than Apple.

Yes, both Apple iPads and ForeFlight are the 500-pound gorillas of in-flight tablets and apps. However, both Garmin Pilot and Hilton Software WingX—probably the other two of the top-three apps—are available in versions that run on Android. Both are good programs and have a lot of followers. The full version of WingX is even available free to CFIs.

We ran the Apple charging issue past one of our team who’s quite knowledgeable about Apple products and he shares your frustration with Apple on this particular issue. He confirmed it, saying: “Sometimes the unapproved cable will still charge, even though it says it won’t. It’s sort of hit and miss.

“The solution is to buy a certified cable, but not the expensive cable from Apple. Amazon sells some of their own brand for about $6. Buying the ultra-cheap multi-packs of cables on eBay means you’ll almost certainly run into this problem.”