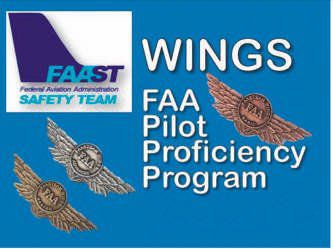 The FAA has long had its WINGS program focused on increasing the skill levels of all pilots. In 2008, it received a major face lift, became web based (www.faasafety.gov), and offered many different opportunities for pilots to increase proficiency without the absolutes of a pass/fail review or check ride.

There are three levels of WINGS: the Basic, Advanced, and Master phases. Each level has multiple phases. Unlike the previous program, multiple phases can be earned each year. To complete a phase, pilots must get three flight and three ground credits which can be chosen from a wide range of activities.

Some CFIs are concerned about liability and typically won’t perform flight reviews. However, they will point pilots toward the WINGS program and provide the required flight instruction. Their approach is to work with the pilot and discuss the objective to help the pilot choose which maneuvers best reflect the pilot’s typical flight profile. Alternatively, they’ll encourage the pilot to explore maneuvers that are typically not part of the pilot’s normal flight profile.

You can’t fail a flight review. Looking back, the flight review requirement was an early step in the FAA’s philosophical change from pass/fail thinking to offering training to achieve the desired proficiency. If the instructor feels you don’t yet satisfactorily meet the requirements, you just continue training until you do.

So it is with the WINGS program—if you don’t perform to the instructor’s standards, you’ll merely continue until you do. This “train to proficiency” approach is refreshing and takes a lot of the stress from what can otherwise be a very difficult proficiency review. Using WINGS as a substitute for a flight review expands on that idea.

Unfortunately, there is no pathway in the WINGS program to get an instrument proficiency check (IPC). If you do get an IPC, a pilot could get flight and ground activity credits towards completing a Basic and Advanced WINGS phase, but not the other way around.

Wouldn’t it be great if there were a WINGS equivalent for an IPC? Going beyond the basic WINGS requirements that meet a flight review, such a program might require an additional flight and ground credit from the Advanced or Master phases and be specifically targeted at the instrument pilot’s needs. Completing these specific credits would be an authorized alternative to an IPC. Thus, a CFI will not need to provide an IPC endorsement—substituting instruction to meet the WINGS credits. This would require the FAA to change the WINGS program (relatively easy) and make regulatory changes (much more difficult).

Meanwhile, consider participating in the WINGS program. It’s a low-stress, no-risk way of remaining engaged and meeting the biennial requirement for a proficiency review. It’s truly one of aviation’s rare win-wins.