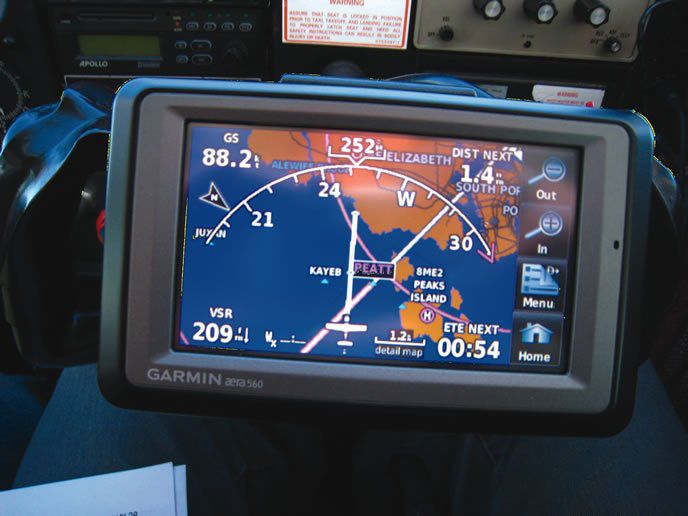 We’ve put most of the current portable GPS offerings through the ringer with an eye to how they support instrument flying. Some are compact and capable, like the basic AV8OR from Honeywell or Anywhere Travel Companion (ATC) from Control Vision. Some are so big they are more like portable MFDs: Trueflight’s FL 210 or most of the EFBs that run on tablets fall into this group. In the end, we liked the aera and 296 through 496 Garmins the best, with a possible exception for the Honeywell AV8OR Ace.

The Garmin units take the gold for ease of use and good integration of data without drowning the user in options. Here’s an example: You call up your destination’s weather and then wonder which runway that will favor. There’s the airport information just a tab away. When it’s time to load an approach, the Garmins offer basic final approach courses that can be added into your flight plan. Thought has gone into how big text and numbers are on the display, and good use of the available screen area is made overall. We prefer the puck XM antenna and cable to carrying around a separate XM receiver with its easy-to-damage antenna. Basically, the Garmins just work how and when you want them to.

The new touchscreen aera is nice, but less capable than the x96 units when it comes to switching views. For example, you need to move up the menu structure to the main menu and then back down to switch from a map view to a terrain screen. It’s great to just enter the names of waypoints from a virtual keyboard, however. We’d probably search for a good used 396 or 496 on eBay before coughing up for a new aera.

Speaking of coughing up dollars, the big downside to any Garmin is the cost of updating the data: It can be five times as expensive as some competing options. Also note that the only Garmin with approach plates is the big 696.

The Honeywell AV8OR Ace (not the smaller AV8OR) is an IFR powerhouse. It will display your position on en route charts and NACO approach plates (although we found the screen too small to show a whole plate clearly without scrolling). The Ace also has some great shortcuts. You can flick the bottom of the screen to switch between a map view and the weather view. You scroll through the list of datafields on the left to see more of them. This is great for things like the nearest airport or a traffic thumbnail. The Ace lets you load Victor airways into your flight plan—a real plus—but the process can be cumbersome with long airways that cover several states when you only need a short segment. The fact that you can’t load an approach into the Ace flight plan is made basically moot by viewing your position on an actual approach plate.

The operating logic on the Ace we find less intuitive than Garmin’s, and too menu-driven. When it comes to displaying weather and airport information, the Ace does a couple things better than Garmin—like showing ceiling and visibility as separate colors in its graphic METARs—but overall we found we had to do more hunting and clicking to see what we wanted as compared to other GPSs. We’re hoping Honeywell improves the software over time. Honeywell also blows away Garmin on the cost of updates. If you’re using the portable as a data resource, this may make the deal for you.

We know many pilots who love their GPS systems from Control Vision. Control Vision also offers great deals on updates and approach charts. We find the software powerful, but the learning curve is much steeper and the current hardware isn’t as capable as Garmin or Honeywell. That latter problem may go away with their new Quadra, but we haven’t gotten to try it yet.