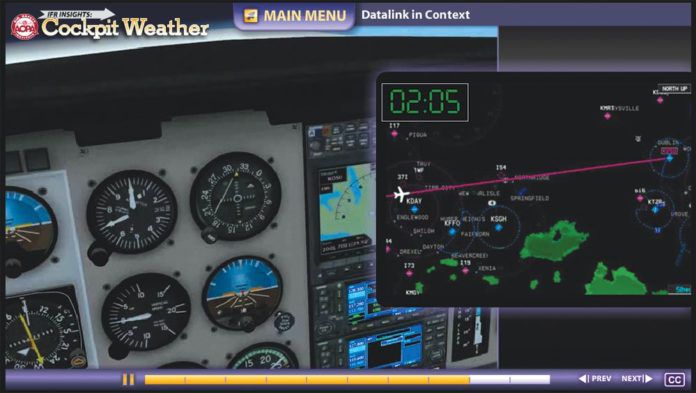 Webinar and other online training is a mixed bag for bolstering proficiency. The best gain for your time spent may be Pilot Workshop’s IFR Mastery Series, but you’ll pay for it.

I recently endured the annual torment known as recurrent training for FAA FASTeam Rep status. The process is just a minor torment: two 45-minute, pre-recorded sessions of narrated PowerPoint with quizzes at the end. It’s the kind of training that’s more a checkbox on some bureaucratic tally sheet than any effective means of teaching.

I put up with the yearly requirement because I enjoy doing the live safety seminars, when I can squeeze in the time to do them. I usually enjoy attending them, too. For me, the real benefit of a live presentation is interaction: There’s an opportunity for hashing out an idea, for conflict and resolution. As a participant, you don’t have to take all the information sitting down. If you don’t agree with something, or it doesn’t make sense, there’s someone to challenge right then and there. Even if you don’t ask a question, the fact that it isn’t scripted gives a feeling that can’t be achieved even with a slickly scripted video.

Unfortunately, that feeling is too often mind-numbing boredom. This is why I’ve never been a huge fan of webinars, but I decided to give them another try, specifically around IFR currency. There are plenty of times low freezing levels, free time, or finances keep us (me included) from exercising our IFR muscles. Would a good IFR webinar be a legitimate hedge against at least some of the rust—and be a bearable experience?

Slim Pickings
There aren’t that many options out there that fit this role. Remember, one of my criteria is actual participation. I started with AOPA’s Air Safety Foundation (ASF) webinars (www.aopa.org/asf/webinars/). These are live shows of about an hour that couple a PowerPoint presentation with conversation that includes a topic expert. You can write in questions as the show goes along and they might be chosen to answer on the air. You could also get your answer offline. You feel less famous, but there’s still some give and take.I wasn’t blown away,

but I didn’t find it a waste of time, either. For example, ASF’s “Flying Safely with Cockpit Weather” had a number of good tips and bits of discussion. It still feels like a slow workshop. It’s one thing to be at a live show where a person you see is talking at length about a subject. It’s another to sit watching an unchanging slide while just listening.

There were good bits of information on interpreting radar images, such as the intensity of “contour lines” on NEXRAD or understanding that dBZ scale is logarithmic—light yellow may be 10 times more rain than dark green—but much of that could have been summed up nicely in one tenth the time. The questions and answers usually didn’t go into real depth. They weren’t jumping off points to meaningful discussion that you can get in live workshops.

These webinars are also recorded, so you can watch after the fact and try to skip the slow parts, but it’s impossible to know exactly what you’re skipping. Live or Memorex, you can listen with one ear while doing something else and then scroll back when you hear something interesting go by.

ASF’s webinars are free, but there are webinars out there for a fee. I wouldn’t have thought these would be that popular, but Bob Miller of Bob Miller Flight Training (bobmillerflighttraining.com) begs to differ. He hosts eight-week webinars (eight, two-hour sessions) and gets 75-100 people to sign up at $149 a pop. Who are these people? Half the participants of his last IFR course had over 200 hours instrument time. Most of the other half was wannabe instrument pilots.

That’s a tough mix, but Bob does a pretty good job of keeping it relevant across the board. Full disclosure: I’ve only watched the recorded version of Bob’s webinars. But it turns out only about 30 percent of his clients attend all the webinars live. So much for the interaction.

For the ones that do attend live, Bob works to keep them involved. “We can see when they zone out or leave,” he told me. “There’s an exclamation mark when they’re still logged in but have switched to other windows on their computer.” The course has a quiz or other interactive bit every six minutes to keep viewers involved. “One of the fatal traps is too much joking around and wasting time. There’s a certain protocol or courtesy to it.” Bob says they’re still learning how to do it best.

A Different Paradigm
The ASF has also offered short, interactive courses online (www.aopa.org/asf/online_courses/). These take 30-60 minutes to run through and are highly interactive. The ones that apply to IFR flight contain good information (if a bit on the bland, by-the-book side) and are well produced. They can be a good alternative to a webinar on the same topic. For example, there is a cockpit weather course that hits many—but not all—of the useful points from the like-named webinar.

When it comes to exercising IFR thinking, though, the program that I was most impressed with was the IFR Mastery series from Pilot Workshops (pilotworkshop.com). It’s not a webinar or online course, but more of an online quiz with discussion.

Each month there’s a new scenario. Step one is watching a simple, yet well-produced video that lays out the IFR scenario. You can download a PDF with relevant documents to give you more info. Step two is making a multiple-choice selection of what action you’d take to handle that situation. You see your choice tallied with all others who’ve tried the scenario as well.

Step three is to hear what the instructor for that module chose and why. This analysis is a good, thought-provoking experience, but what I find more interesting is the instructor round-table discussion. This is a recorded discussion where several of the Pilot Workshops instructors weigh in with their thoughts and disagreements. There are usually several good points to chew on. There’s also a discussion forum for each scenario where you can work a back-and-forth with each instructor. It’s not participating in the round-table, but it’s a way to participate. A limited forum relating to each scenario keeps at bay the conversational meandering endemic to online forums.

I don’t think the series is perfect. Sometimes the downloaded information is not as complete as it could be, and I’ve disagreed with some of the expert answers. But it’s pretty good. There’s also for a fee of $199 to sign up (and access all archived scenarios) and $29/month after that. I’m not sure if it’s that good. But then again, that’s less than two-hours of flight for many aircraft to try it out.

Worth the Time?
The very act of taking the time to think IFR has a legitimate payoff in keeping the IFR rust at least partially at bay. Given what I’ve seen so far, IFR Mastery has the best workout for time invested. But I’m still searching. What about those slick videos? Are they worth the time? We’ll take a look at them in a later issue.

Until then, you can also look for a live seminar (www.faasafety.gov). Some of those speakers aren’t half bad, and it’ll get you out from your computer.
Jeff Van West is the editor of IFR.