One of the beautiful things about Oshkosh is the self-deception: Stand in the middle of the crowded grounds, teaming with people and aircraft, and you can enjoy the momentary illusion that aviation is actually a popular, well-attended activity.

The illusion gets harder to maintain each year because age (and time spent working beside Paul Bertorelli) forms an ever-thickening cynical crust. This year should have marked a brightening in the aviation outlook—there were major product announcements from $515,000 diesel-powered Skylanes to $1000 combo ADS-B/GPS/AHRS units that turn your iPad into a handheld glass panel and fit in your pocket (see page 17). But it was notably lacking in what Oshkosh is almost always good for: people.

I don’t know what the official numbers are, and I wasn’t there over the weekend, so it’s possible I missed the mob. But with the exception of a bit of a crowd in the hangars on Monday (and that may have been everyone trying to escape that day’s 102-degree heat), it seemed awfully quiet. The food lines weren’t as long. The throngs around always-popular items like simulators or the Garmin avionics displays seemed thin.

This was thrown into sharper focus by a survey on interior shops we were running on AVweb.com for my other life, writing for The Aviation Consumer. In 2008, we ran this survey and got 238 responses. That’s not a staggering sample size, but it’s almost twice the 132 responses we got for our current survey. This says to me either owners are putting off refurbs and upgrades, or that a lot fewer people are reading aviation media like AVweb and responding to surveys. It’s probably some of both.

Both are troubling in their own right. All these cool new products aren’t going to make any ground without a willing mass of consumers ready to buy them. Such a big drop in people spending on their own machines doesn’t bode well. I think this will hit disproportionally harder on the big-price-tag, certified items. Small companies able to live on low volumes and tight margins can move a cool product from concept to reality and sell enough to pay the rent if they’re not paying off certification costs. Panel avionics or new aircraft designs? We need growth there to keep the industry fresh, but someone’s got to be willing to write a check for the bureaucracy tax.

A survey drop simply from people drifting away from aviation media bodes ill as well. One of the things that I always found reassuring about Oshkosh is how the attendance was larger than the entire certified-pilot population of the U.S.—airshows appeal way beyond people who already have licenses. Beyond just being a source for new pilots, it keeps the aviation Pollyannaism flowing around a population who just paid $3000 to replace a cracked wheel fairing. We need that.

All of this together puts a real face on the erosion of aviation as a habit, an interest and an integral part of people’s lives. None of this is news, of course. It’s just that a little self-delusion is good for everyone’s benefit and the bottom line.
—Jeff Van West 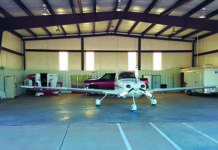 You Meet The Nicest People