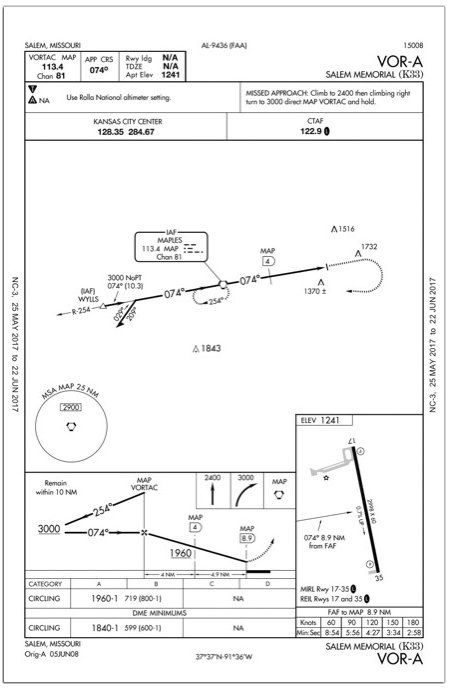 You are flying the VOR-A approach into Salem Memorial (K33) in your Cessna 182. The airport has no tower, with Class E airspace starting at 700 feet AGL. The winds favor Runway 17. You “dive ‘n drive” after the DME stepdown and break out at 680 feet AGL with the runway in sight two miles ahead. Do you (a) cross midfield and make left downwind to 17, or (b) turn right to the upwind leg for Runway 17 and make left traffic from there, or (c) turn left before reaching the airport and make right traffic for 17.

All three sound like reasonable choices. Each will enable you to keep the runway in sight while maneuvering for landing. If you choose (c) because, after all, you are IFR, you’re not alone. But you probably busted 14 CFR 91.126(b).

“When approaching to land at an airport without an operating control tower in a Class G airspace—(1) Each pilot of an airplane must make all turns of that airplane to the left” unless the airport displays signals or markings indicating turns should be made to the right, in which case right turns is the rule.

There is a common misconception among instrument-rated pilots that traffic pattern rules don’t apply to IFR flight. They do. At times, it might not make much sense but there are regulatory and safety reasons for applying the rule.

In three published interpretation letters between 2009 and 2014, the FAA Chief Counsel’s office confirmed the applicability of the pattern-direction rule to aircraft on instrument approaches. All three are consistent in saying the traffic pattern rule applies to IFR flight, and specifically to circling approaches.

In the first of these, in 2009, Daniel Murphy asked whether 91.126(b)(1) “allows a pilot to conduct a circling approach with turns to the right to an uncontrolled airport in instrument meteorological conditions (IMC) if the pilot determines that turns to the left are undesirable.” The FAA legal group was equally straightforward in its response: “The use of ‘must’ [in 91.126] does not permit a pilot’s discretion in determining in which direction to make turns when approaching the airport.”

When we give it some thought, the basic rule makes sense. Ground and flight instructors often seek to help primary students make sense of airspace classifications and rules by discussing them in terms of the need to keep IFR and VFR traffic separated. In the regs, 91.159 adds 500 feet to VFR cruising altitudes above 3000 feet AGL to create a vertical buffer with IFR traffic flying on the thousands. Airspace classes D, C and B are increasingly busy with IFR traffic so there is a greater need for ATC involvement with VFR flights.

This need for separation is also the underpinning of applying the traffic-pattern direction rules to circling approaches. Most of the separation rules are about keeping VFR flights away from IFR traffic. This time it seems to be the opposite—fitting IFR flights into the flow of VFR traffic at airports without towers. As unusual as it might be in practice, VFR traffic may legitimately operate in the traffic pattern where Class E begins at 700 feet AGL and there’s no tower. Given all the concerns instrument pilots have about circling approaches to begin with, breaking out at Salem Memorial at 680 feet and planning a right downwind is not the time to meet that NORDO (no radio) Cub correctly flying in the opposite direction.

It should come as no surprise that attempts to have the Chief Counsel’s office reconsider have gone nowhere. At least two additional inquiries have generated FAA replies. In 2013 John Collins requested a more liberal interpretation of the words “unless otherwise authorized or required” in 91.126(a), to allow for more pilot discretion. Nothing doing. The regulatory language, said the FAA legal group, means “authorized or required by the approach guidelines of a specific airport or by another FAA regulation.” The letter recognized the exercise of a pilot’s emergency authority as a legitimate basis for deviating, but warned the decision “must be made in good faith based on safety concerns and not convenience; failure to do so may result in the suspension of the PIC’s certificate.”

A 2014 request for another reconsideration pointed to the depiction of circling approaches going in both directions in the Instrument Flying Handbook. It went just as far. “The diagram is not specific to Class G airspace and should only be considered generally illustrative of possible circling approaches. It does not provide authorization to make right-hand turns in violation of 91.126(b)(1).”

So, when is deviation from the traffic pattern rules “authorized or required” outside of an emergency?

The Murphy interpretation seemed to leave the door open for opposite direction traffic authorized by ATC. “Section 91.126(a) provides an exception to the requirement to make turns to the left if authorized or required by air traffic control (ATC). This exception permits a pilot to request clearance to make right hand turns under these circumstances.” However (and perhaps to show the Chief Counsel does reconsider things from time to time), the FAA caught its own error and corrected it in the Collins letter. ATC, by definition, has no authority over Class G airspace. So, ATC has no authority to permit a deviation from the traffic pattern rule, at least at airports where the area below 700 AGL is Class G (more on that later).

What if the chart reads “Circling NA” where the “correct” pattern lies? Consider the RNAV(GPS) RWY 12 approach into Tracy, California (KTCY). The Chart Supplement tells us left traffic for all runways, but the approach chart notes tell us “Circling NA southwest of Rwy 12-30.” If inbound from the west with northwesterly winds, one might well choose to circle to 30. Does the prohibition against circling in the direction of the VFR traffic pattern equal authorization “by the approach guidelines of a specific airport” to circle against it?

The FAA hasn’t answered that yet and it’s always risky to speculate about regulations. One might think you should be able to—if you can’t circle one direction you should be able to in the other. But, there are other approaches available using the same equipment. Absent emergency conditions, nothing requires the pilot to choose circling to Runway 30 over the straight-in approach to the same runway. And the safety considerations are no different than if the airport did not have the circling limitation.

As discussed earlier, the Murphy letter originally provided an exception when ATC issues a clearance to circle against the standard traffic pattern. It was a door closed in the Collins letter, at least as to Class G airports. The reason was ATC’s lack of authority in Class G airspace.

That rationale does not apply to Class E surface areas, whether considered from a regulatory or safety standpoint. By definition, “controlled airspace” is “airspace in which aircraft control service is provided.” It specifically includes Class E airspace. Although control is not exercised to the same extent as in D, C and B airspace, ATC’s authority in Class E over both IFR and VFR aircraft is well-documented. ATC is authorized to issue Special VFR clearances into Class E surface areas. The FAA has said VFR flights must obey ATC instructions in Class E, even though they are not typically given.

At the same time, Class E airports are more restrictive than Class G airports. Per 91.155(c), VFR operations (without a Special VFR clearance) are prohibited when the ceiling at a Class E airport is less than 1000 feet. So the same considerations do not apply in the two types of airports without towers. Unlike Class G, pilots should not encounter VFR traffic at Class E airports when the reported ceiling is below 1000 feet.

These differences are reflected in 91.127(a) telling us to follow the same traffic pattern rules as Class G airports, “unless otherwise authorized or required by the ATC facility having jurisdiction over the Class E airspace.”

One observant pilot pointed out in a 2011 letter to the FAA Chief Counsel that the standard 45-degree entry to downwind violates 91.126(b)’s requirement to make “all turns of that airplane to the left.” The FAA responded, saying that was okay “because we have long considered that this rule does not prohibit maneuvers necessary to safely enter the flow of traffic at the airport.” In short, that particularly violation of the rule is okay because they said so.

That academic discussion aside, more than one pilot has been caught in the enforcement trap by making a right turn the pilot thought was outside the traffic pattern but the FAA thought was inside it. In two enforcement cases involving Alaska Airlines in the mid-1980s, pilots flying 737s were violated for making improper right turns. In both cases, the pilots claimed they were making straight in approaches. In one, the pilot admitted to making the right turn to final 3.1 nautical miles out.

The cases contain language suggesting a turn within six miles would be considered in the traffic pattern. In one, the administrative law judge hearing the case opined, “a turn that is five or six miles out would not be inconsistent with a ‘straight-in approach.” “Not inconsistent with” is legalese for “perhaps that would be okay, but not necessarily.”

For most of us, six miles is probably a decent guideline, but the NTSB decisions are not that clear. The real issue is whether the approach “interfered with other aircraft operating in the standard left-hand pattern.” As one of the two Alaska Airlines cases put it, straight-in approaches are permitted, but might still be a violation of the left pattern rule if it interferes with other traffic following the standard traffic pattern.

When discussing regulations, remember that most of them set minimum standards. Said another way, “legal” does not mean “safe.” Theoretically, opposite-direction traffic to a Class E airport could be authorized by ATC in any VMC weather. Even if ATC were to grant such a request when the weather conditions permit VFR operations, it might not be a particularly clever idea. It’s better to be safe.

As always, although we fly IFR under a sometimes-complicated backdrop of regulations and standardized procedures, safety and responsibility are ultimately in our hands when we take on the mantle of pilot in command. Many of us consider circling at low minimums to present extra hazards and risks and give special attention when planning a circling approach. Let’s be sure to take the airport’s standard traffic pattern direction into account.

Mark Kolber is a pilot and aviation lawyer whose wife gave him introductory flight lessons for his birthday more than 25 years ago. She says he’s been going around in circles ever since.