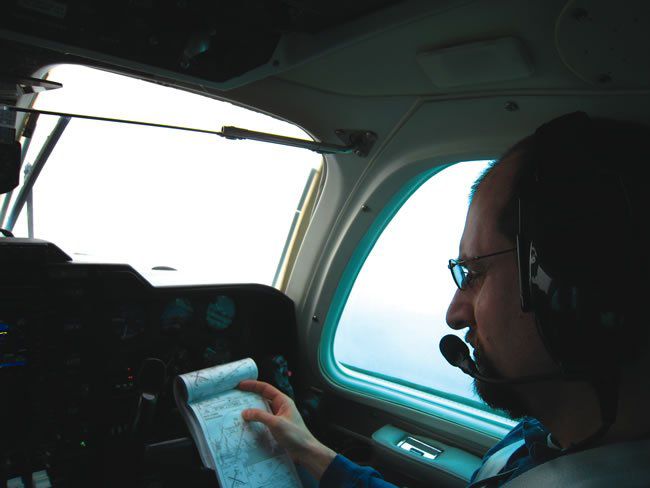 People are naturally social creatures, eager to converse with their own kind. While friendly chit-chat is great during quality time with the friends and family, when you key up a radio frequency, it’s time to pare back the language and cut to the chase.

Student pilots are taught to aviate, navigate and communicate—in that order. But once you start working on your instrument rating, your communications must be kicked up a notch. If you want to fly IFR, getting comfortable on the radio is not optional. ATC is expecting to hear certain things from you during different phases of your flight. Why are they important and what is the best way to say them?

Wheels Up
An aircraft’s takeoff and initial climb are critical periods on both sides of the radar scope. While the pilot is ensuring his instruments are in the green, the controller has a few things to check, too. And the controller needs a good transmission from the pilot to make it happen.

To understand why, let’s peek behind the scenes at the Tower-Approach Control relationship. A control tower and its overlying radar facility use a Letter of Agreement (LOA) to specify what altitudes and headings aircraft are assigned upon departure. The LOAs are unique to each facility. Our Tower uses 2000 feet for propeller aircraft and 3000 for jets. Departure headings are restricted to within 20 degrees of the runway heading. If I release an IFR Cirrus SR22 for departure off Runway 16, I expect the Tower to do two things: Assign him 2000 feet and give him a heading somewhere between 140 and 180 degrees.

How will I know if that SR22 is complying? Well, it’s up to the pilot to tell me. When he checks in on departure, I’m expecting to hear a single, clean transmission from him that contains his current altitude, his assigned altitude and his heading. Good radio technique gets your information across in as few words as possible. Compare the following two transmissions:

Say them out loud. As you can see, both transmissions get the important info across. However, that first one is chatty and less professional. There are 13 extra words in there, all useless. The “this is” and “on a” are just dead air. The “climbing out of” is redundant because, well, isn’t the airplane taking off? And if he’s talking to me on my frequency, isn’t he in fact “with me”?

The second one is short, sweet, and sounds far more elegant. It accomplished everything in far fewer words. If that Cirrus is the only plane on my scope, the long transmission doesn’t affect me. However, if I’m working 15 other airplanes, those seconds are precious. I’d rather hear the second version.

The more quickly you fulfill your end, the more quickly I can accomplish mine. When I look at the Cirrus’ radar target and see that it also shows him climbing out of 900 feet, that verifies his transponder’s radar altitude readout matches what he’s seeing on his instruments. I can therefore trust that altitude. Secondly, the “for 2000, heading 140” tells me that he is in compliance with the LOA altitude and heading assignments. Any discrepancies, such as a bad altitude assignment, incorrect altimeter setting or a faulty transponder, can be noted and dealt with sooner rather than later.

On The Way In
While en route at your cruising altitude, it’s good technique to check in with each new controller by simply stating your altitude. “Houston Center, Cirrus Four Alpha Bravo, level 12,000.”

The controllers in the Centers and TRACON facilities along your route of flight will have your flight plan information in front of them, in either paper flight-progress strips or electronic form. This will display your requested cruising altitude. When you check in with your altitude, they’ll be able to corroborate the two.

However, once you begin the descent phase of your flight, it becomes extra critical to check in with your altitude. ATC is now dealing with an aircraft that is moving vertically, not just laterally at a fixed cruise altitude. The controller wants to confirm your current altitude and what you’ve been assigned, in case there’s any traffic that may conflict with your descent.

You can take care of it all in a quick, clean format: “Greenview Approach, Cirrus Four Alpha Bravo, 7600 for 4000, information Charlie.”

So, why is checking in with your assigned altitude extra-critical during descent? Doesn’t ATC have flight progress strips showing to what altitude your aircraft is descending? Well, this may seem strange, but our arrival strips don’t actually display an altitude. Departure strips do. En route strips do. Why not inbound strips?

Let’s hit the LOAs again for a second. At my TRACON facility, our LOA with our sister TRACON to the east requires them to feed us aircraft landing within our airspace at one of three altitudes: 4000, 6000 or 8000.

Radar facilities around the country operate under similar agreements with their neighbors to grant flexibility to put arrivals above or below other traffic. Because there are multiple altitude options, our flight progress strips for arriving aircraft have no hard altitude printed on them.

When I accept a handoff on your arriving aircraft, I know you’ll either be level at or descending to one of those three altitudes. How do I know which one? Well, I’m hoping you’ll tell me. If you don’t, you can bet your headset I’ll be asking you for the info: “Cirrus Four Alpha Bravo, Greenview Approach, verify assigned altitude.”

Don’t wait for ATC to prompt you. Be ahead of the game and quick with the information.

Going Missed
A missed approach can be quite a thrill—especially in real IMC. While you’re cleaning up the airframe and otherwise convincing the airplane to fly again, ATC will probably see your altitude increasing and start doing some shuffling to fit you back in the sequence. Get on the radio and tell them your plan.

Missed-approach procedures can be either executed as published on the approach plate or manually issued by ATC. A published missed procedure contains an assigned altitude, a turn direction, a holding fix, and a frequency. ATC-assigned procedures will contain the above as well, but are verbally assigned either by the radar controller or by the Tower.

For a published missed approach, include your altitude and the fix towards which you’re flying. Controllers have potentially dozens of instrument approaches in their airspace. It’s not likely they’ll have every single missed approach procedure memorized. Jog their memory: “Greenview Departure, Cirrus Four Alpha Bravo, executing missed-approach, turning right to GUNLY, 700 for 2000.”

Manually-assigned missed-approach instructions can improve the whole operation. For example, if a student pilot is practicing several ILS approaches to the same runway, ATC may assign him a heading and altitude to fly that will put him in position for his next ILS. On the go, the phraseology would be, “Greenview Departure, Cirrus Four Alpha Bravo, executing missed approach instructions, 800 for 1500, heading 180.”

Speak Well, Fly Safe
While ATC has the big picture, as you can see we often depend on you to fill in the details. What you say and how efficiently you say it is key to giving controllers the information they need to provide you with safety and service. Doing so ensures all parties are on the same page and keeps problems from becoming disasters.

It’s a skill controllers have to learn as well. When I began my ATC training, my instructor took a count of how many extra, useless words I used on the radio in one day. During our debrief, he told me to take all those words and multiply them by how many hours, days, and years were left in my 25-year career. I pictured thousands and thousands of pointless words clogging up the airwaves. He got his point across.

Years later, I’m not 100-percent chatter-free, but I won’t waste a pilot’s time with excessive babble. I’ve also come to appreciate pilots who are succinct and professional. Keep the transmissions quick and on point, and your next controller will appreciate you, too.

Tarrance still throws in the occasional (and sincere), “So long,” “Take care” or “Have a good flight”—when he can get away with it.