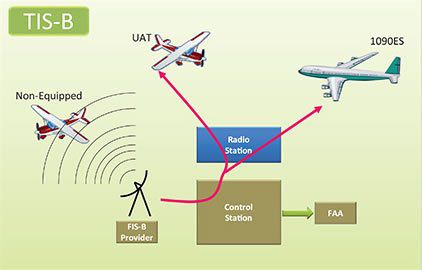 The great promise of ADS-B is that it will eventually offer free traffic and weather services for those pilots willing to pay for the equipment and displays. But until everyone has ADS-B Out—required by 2020—a technology called TIS-B (Traffic Information Services-Broadcast) will fill the trafffic gap, allowing you to see everything ATC sees within a reasonable range of a radar site, presuming you and the radar site are suitably equipped. Let’s explore how TIS-B works and how it fits into the current state of ADS-B.

The whole ADS-B environment (ADS-B, FIS-B, TIS-B) is a Surveillance and Broadcast Services System (SBSS). This is only meaningful for the big picture, after which you can forget the term.

UAT stands for Universal Asynchronous Transceiver and is generally relegated to lower altitudes. It operates on 978 MHz and is capable of both sending and receiving full ADS-B data. The term 1090Es stems from its frequency—1090 MHz, the same as is used by transponders. The ES refers to “extended squitter” that is essentially a means to encode additional data piggybacked on the transponder signals. Aircraft equipped with 1090ES are fully ADS-B Out compliant and can receive traffic, but weather is not available on 1090ES.

In the diagram below, you see the Cessna’s UAT datalink talks with the jet’s 1090ES datalink. This ground station cross-link is called ADS-Rebroadcast. But this rebroadcast connects only ADS-B aircraft. Enter TIS-B.

The first task of TIS-B is surveillance. TIS-B gathers non-ADS-B radar targets from FAA radar and injects them into the TIS-B datalink on UAT and 1090ES, giving ADS-B Out and In-equipped aircraft a comprehensive view of nearby traffic.

Also injected into the uplinks are targets seen by wide-area multilateration (yes, “WAM”). WAM uses three-dimensional triangulation to produce a screen that looks like radar. It’s commonly deployed in areas with poor radar coverage, such as in the mountains. Ultimately, WAM and secondary radar-derived (conventional transponder) targets from non-ADS-B Out aircraft find their way into the data uplinks. This leads to the first of several caveats: If neither secondary radar nor WAM can see your transponder, you don’t exist in TIS-B, or normal ATC radar, for that matter.

The second caveat is that there must be adequate broadcast coverage from the ADS-B ground stations so the datalinks will work. Third, the quality of the traffic information provided by TIS-B depends on the quality and quantity of radar and WAM data. Ground stations do not offer TIS-B if no traffic data is available at that site.

Gear On the Ground

Look at the lower half of the figure on the facing page. You’ll see data inputs for FIS-B (weather) and TIS-B (traffic) services feeding the ground station. ADS-B information is also sent back to ATC. Notice that gathered surveillance data flows to TIS-B, ADS-Rebroadcast and back to ATC. The four services’ data are placed in separate messages symbolized by the red arrows and sent back-and-forth via radio (the triangles are antennas) between the SBSS ground station and fully-equipped ADS-B aircraft.

TIS-B provides active ADS-B users with position reports of non-ADS-B aircraft. To be useful, there must be minimal delay between the time a target is detected and its appearance on your screen. Overall end-to-end delay from sensor measurement to start of the TIS-B transmission is less than 3.25 seconds, so even at a jet’s near-500 knot speed, the target will move a maximum of about 0.14 miles before it’s displayed.

There are currently 663 ADS-B ground stations in the U.S. These stations perform TIS-B’s second task, to refresh TIS-B service status (as opposed to target update rate) every 20 seconds to ADS-B and TIS-B clients.

Gear in the Air

An aircraft that has ADS-B Out and ADS-B In is called an ADS-B client since it can receive ADS-B messages from ADS-B targets on the same air-to-air link. It also receives ADS-B data from a ground station on that link. In the diagram above to the right, both aircraft are clients and targets, but the client on the right is the one we’ll discuss.

This ADS-B client diagram shows reports emerging from your ADS-B receiver and how they get to that fancy display you have (or will have).

The ADS-B transceiver can be either the 978 MHz (UAT) or 1090ES flavor. ADS-B, ADS-Rebroadcast, TIS-B and FIS-B reports are processed and passed to a Cockpit Display of Traffic Information (CDTI, an acronym only the FAA could love) for the flight crew. To you, you’re simply seeing ADS-B In traffic on your cockpit display.

The nearby left-hand aircraft sends ADS-B messages air-to-air to our client, with no need to go to the ground first, provided that both aircraft are UAT or 1090ES-equipped. If not both UAT or both 1090ES, that message will be heard on the ground and rebroadcast on the other datalink via ADS-Rebroadcast.

Like ADS-B, TIS-B has targets and clients. An aircraft that is an active ADS-B user and receiving TIS-B service is a TIS-B client as above. A non-ADS-B equipped aircraft that has its position transmitted in TIS-B reports is a TIS-B target. We who fly along with our portable datalink devices connected to a tablet are TIS-B targets if we are seen on radar or WAM.

Me and My Shadow

Given constantly changing traffic flow, data must be rapidly received, processed and uplinked. As the table shows, the desired delay is under 3.5 seconds. Even so, you might receive an intermittent target “shadow” of yourself, usually while maneuvering. At six or twelve seconds a sweep, radar cannot track you as fast as ADS-B’s one-second update rate. Shadows can be scary, but the target appears and disappears quickly right at your altitude—a clue you that you are seeing your image.

Similarly, the ground system correlates incoming radar with ADS-B targets. Sometimes the correlation doesn’t go so well and you briefly see two traffic symbols, one a shadow, but not around your airplane.

This illustrates one of the undesirable effects of all these inputs: Multiple targets can be reported when there is only one. This is just one example of TIS-B’s third task, target suppression, where TIS-B suppresses specific data associated with a target.

Suppression bolsters our right to privacy. The FAA has directed that TIS-B service “shall preserve the anonymity of targets as designated in their ADS-B data or by FAA directive.” TIS-B can suppress a target based on its target address or transponder code. Moreover, TIS-B messages never include the actual transponder squawk.

TIS-B service is available in supported service volumes (“hockey pucks”) when there is both adequate radar/WAM surveillance coverage and adequate radio coverage from SBSS ground stations.

The hockey puck is a 3500-foot tall and 30-nm diameter cylinder of airspace with the aircraft at the center. Above FL240, TIS-B clients do not receive service, but targets are still provided up to 27,500 feet. This is just to say the upper half of the hockey puck does not get chopped off at FL240.

TIS-B targets are updated every six seconds in the terminal service volume. Enroute, it’s 12.1 seconds. These numbers correspond to the radar update rate in terminal or enroute airspace. A TIS-B message is sent only when the target is updated with new sensor data.

TIS-B is not a collision avoidance system. It is intended to help you visually acquire traffic more rapidly and help you comply more fully with our “see and avoid” responsibility in 91.113(b). The AIM tells us that “TIS−B must not be used for avoidance maneuvers during times when there is no visual contact with the intruder aircraft.” It also tells us not to report “traffic in sight” based on the cockpit display. Unlike TCAS, TIS-B users may not perform avoidance maneuvers without ATC consent when flying IFR. Lacking ATC coordination, you could wind up in someone else’s way and buy yourself a pilot deviation—or worse.

Garmin Pilot software shows a status icon with a yellow star in it titled “Virtual TIS-B” when piggybacking occurs. Garmin says it means that “you will typically receive TIS-B coverage within a minimum of 3 nm and 3000 feet of your current position.”

To receive full TIS-B, you need a 978 MHz UAT or 1090ES transponder to trigger those TIS-B updates. At Oshkosh this year, Appareo (maker of the Stratus receiver) showed a planned ES transponder with built-in WAAS. It needs a WAAS GPS antenna and uses the existing transponder antenna to provide ADS-B Out. This might be a good option for non-WAAS aircraft.

Pairing an ADS-B transponder with a tablet computer for display does not qualify an aircraft as ADS-B In.

To Test Is Best

I’ve been flying Garmin’s portable GDL 39 in a non-ADS-B aircraft for about six months. The aircraft has the earlier TIS service that’s being phased out in favor of ADS-B.

The GDL 39 is forced to operate mostly in degraded mode because it is receive-only. Therefore much of the traffic showing up on the old TIS screen doesn’t appear on the TIS-B iPad. This is to be expected because this is half an ADS-B In installation. It does show, however, an impressive number of ADS-B Out targets, far more than one would expect, given the slow rate of GA adopting ADS-B. These targets are received air-to-air, which works perfectly.

TIS-B, and ADS-B for that matter, is still pretty new. You can help the FAA work the bugs out by reporting any issues to the FAA Surveillance and Broadcast Services Program Office at 1−877−FLYADSB or http://www.adsb.gov.

As cool as this stuff is, let’s remember there is no substitute for the tried and true LOTW method of traffic avoidance (looking out the window). This stuff just tells you where to look, but that’s a great start.

Fred Simonds dodges a lot of traffic as a CFII in Florida.