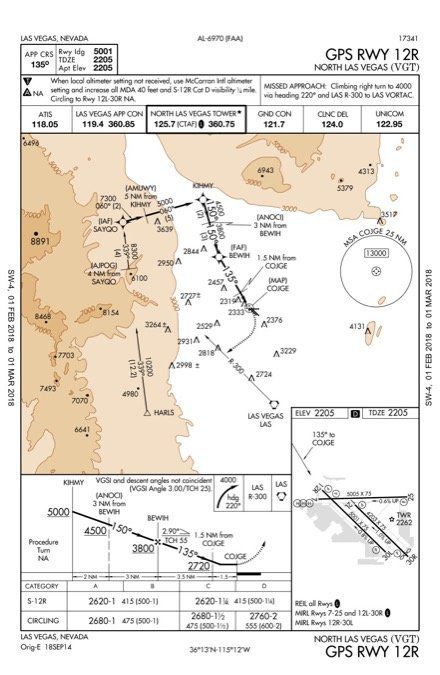 In 1984 when I got my instrument ticket, I was taught to use FROM when identifying crossing radials. I don’t know if that is a standard practice or simply my instructor’s way of doing it. In October’s Killer Quiz, “Gone to the Dogs,” you are identifying PLAZA via TO the 173-degree radial. My way would have been to dial in 353 and use a FROM indication.

At the top of the second column on page 12 it also states “…so you dial a radial from SFO to verify PLAZA.” Again it appears the radial dialed in is TO, not FROM. I’m wondering what your thoughts are on this.

Identifying a radial is equally accurate with a TO or a FROM indication. You’re correct that the panel setup in the KQ uses TO in both cases. Which you use is a matter of your training, your comfort and your ability to do the mental gymnastics to convert the numbers. If using FROM works for you, keep doing it.The author of this Killer Quiz, says he personally sets it so the needle swings from right to left as he crosses the radial. Here that would be “FROM.” Sometimes when creating the KQ there are setups, like TO versus FROM, for questions that don’t get used. That’s probably how this particular setup used TO indications.

No to Privatized ATC

For decades my family and friends have traveled to northern Saskatchewan for summer fishing trips. The border crossings and clearing of customs in Canada became simple and routine.

Then, Canada privatized their ATC. Shortly thereafter we were departing New Castle, WY, IFR, as a flight of two. Immediately after calling CANPASS (Canadian Customs) to alert them of our arrival time at CYQR (Regina), we taxied for takeoff and called for our IFR clearance. FSS advised us that our clearance was on request. We waited. And waited.

After entering Canadian airspace and making contact with Winnipeg Center, I advised my son, who was flying the lead airplane, to contact Center, now a privatized organization, and request that they contact CANPASS and advise them that we would be 45 minutes late due to our delay in receiving our IFR clearance.

Here’s the punch line. After receiving the request to contact CANPASS, Winnipeg Center replied “We no longer talk with those people.” Another example of collateral damage in privatizing ATC.

Not There, but Over There

I was flying into Las Vegas, NV yesterday, and had an interesting “wakeup call” experience. Based on weather, flow delays, and logistics, Henderson (KHND) looked like a reasonable choice. However, during the flight itself, updated weather and reports from ATC resulted in us deciding to land at North Las Vegas (KVGT) instead.

Conditions were favoring the ILS 12L which, due to local terrain, presents the oddity of the best/lowest approach being to the shortest runway, which, under the circumstances, was shorter than we wanted. The ceiling was reported right at minimums for the GPS 12R, so we requested that instead.

With a high risk of a miss, we thoroughly briefed the procedure. Approach vectored us from the west into a left-hand 180 back to KIHMY, leaving us at an excessively high altitude all of the way to KIHMY. This required an aggressive descent between KIHMY and BEWIH, after which VNAV came alive and the approach stabilized.

During all of this maneuvering, we highlighted that we would be approaching the threshold of 12R on an angle, with a late left turn to final. Indeed the final approach course for the GPS 12R crosses the localizer for 12L.

Late in the approach, the G3000 synthetic vision helped a lot. (“Ahh, the runway is inthatdirection.”) We broke out right at minimums, the PAPI was visible over to the left, and with a smooth left turn everything worked out perfectly.

And yet afterwards I found myself staring at the approach chart thinking, “What did I miss?” Why wasn’t I more prepared for the angle?

There are two clues about the angle on the chart. First, the approach is called the GPS 12R, not the RNAV 12R, and I am guessing that should have been a clue. Interestingly, it was not called the GPS A approach (which would have caught my attention more so). Second, the inbound course between BEWIH and COJGE is shown as 135 degrees.

So yes, the clues were there, and some page flipping and more examination time would have better prepared me. But in a high workload environment, it woulddefinitelyhave helped if there was a note on the chart similar to “final approach course misaligned with runway heading by 15 degrees.” There are lots of similar notes that have far less value.

And for extra credit, we did consider flying the ILS to 12L and side-stepping to 12R, but the fact that the threshold for 12R is approximately mile “closer” to the approach would have meant a side step and a nonstandard descent on short final, under conditions where any excessive speed on wet pavement was seriously undesirable.

Anyway, even after a perfectly flown approach and the correct decisions along the way, we were still left with the feeling that we missed something and could have been better prepared.

If you’ll forgive me for finding a bit of humor in what I’m sure was a soul-searching experience, after reading your interesting story I’m reminded of two old sayings:

“Experience is what you get when you don’t get what you expected to get.”

As you say, you flew the approach perfectly. No problem there. So, as startling as it was to see the runway “way over there,” you did indeed see the runway and land safely, exactly as planned.

So, did you do anything wrong? Doesn’t sound like it. Were you ill prepared? Again, it doesn’t sound like it. You say you noted the offset runway from the final approach course, but were simply not prepared for the visual impact of that offset. I’ll bet next time you will be.

Should the approach chart have stressed the offset? Certainly. However, there are myriad nuances to any given approach that aren’t specifically called out in the notes. Right or wrong, it’s still our responsibility as pilots to adequately review the material that is available. The facts are there; it’s up to us to realize the implications of those facts.

I’d offer one more thought. Did the extent of the offset cause you to take enough longer to get the runway in sight to make any difference? Did it delay any final configuration to the point where you lost stabilization? Did you overshoot and have to S turn? Did you land beyond the TDZ? It doesn’t seem like it.

So, the whole thing seems to boil down to a bit of a surprise at the visual impact of the offset. Nonetheless, you did everything correctly, so, in realty, what’s the impact of that surprise? Referring to my opening little sayings, you now have more and better experience. Maybe someday you’ll get to fly this approach again, and perhaps even have a strong right crosswind placing the threshold even further “way over there.” I bet that won’t surprise you now.

Thanks for sharing your story. Your experience gave us the seeds to write the article appearing on page 14 that will hopefully give us all more to think about.