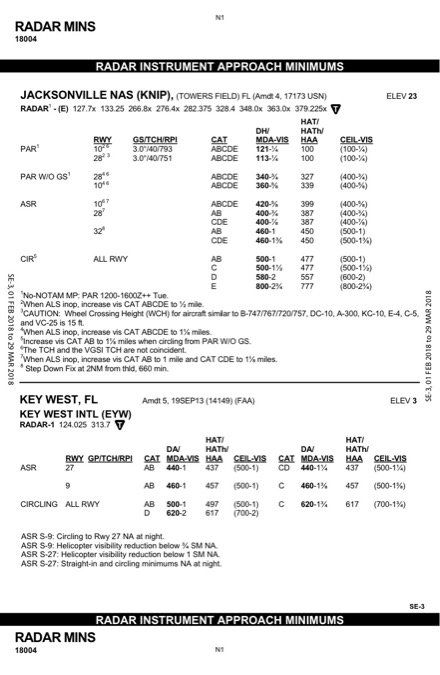 Before the advent of GPS approaches, most civilian approach control facilities provided Airport Surveillance Radar (ASR) approaches, usually as a back-up to pilot-nav approaches. Many are now gone but some airports still have them. In Florida, only two civilian airports have ASR approaches: Key West and Tallahassee, at opposite ends of the state. However, there are seven military airports with ASR approaches.

If you are lucky enough to have an ASR approach near by and have never flown one, consider trying it during the next IPC or on your own with a safety pilot. There are two issues to consider. Because of the current lack of ASR approaches, many CFIIs are not familiar with them, but the good news is that the controllers will provide the information to fly the approach. Also, because the approach is labor intensive, it is best to call the controlling approach control facility to find out when they might be able to provide a practice ASR approach. However, don’t be surprised if you get a time very early in the morning or late at night when traffic is low. Do keep in mind that controllers need to practice the approaches for currency purposes, so they’ll probably try to be as accommodating as traffic will allow.

A list of airports with ASR approaches can be found in the U.S. Terminal Procedures Publication—the “government charts”—in Section N. For example, for Key West International airport (KEYW), the information provided includes the MDA and visibility for each runway. Notice that the approach minimums include not only a visibility requirement but also a ceiling requirement. This is unlike other civilian approaches that are predicated only on visibility requirements—ground visibility in statute miles or runway visual range (RVR) values reported in feet.

Jeppesen provides the same information in an approach chart format. The advantage of having an approach chart as opposed to only textual information is that other information is provided, such as frequencies and nearby navigation aids. Also notice in the Jeppesen approach chart the procedure is referred to as RADAR-1, no MSA is published, and a specific ceiling requirement isn’t mentioned. Additionally, a VOR requirement is not mentioned in the notes even though a VOR receiver is needed to fly the missed approach. I would presume that ATC would provide alternate missed approach procedures if an airplane does not have a VOR or GPS.

Maybe next time you fly to Key West, ask for the ASR approach; however, the ASR approach is handled by NAVY KEY WEST Approach. I would suggest contacting KNQX approach prior to the flight to ask if they would be able to provide the service.

The only required airborne equipment is a two-way radio for communications with the controller. While not specifically required for the approach, at least a mode C transponder would be nice to have.

The ground equipment, besides a two-way radio, is an approach radar. The controller only provides lateral information (azimuth) and suggests altitudes including intermediate step-down fixes along the final approach course. The controller will advise the pilot when to commence the final descent to the MDA. Finally, the controller will let you know when the airplane has reached the missed approach point.

Like any approach, if the pilot does not have the runway in sight at the MAP, a missed approach is required. The controller will instruct the pilot to do a missed approach. Clearly the ASR approach is labor intensive since a fully dedicated controller is required to provide the vectors for one airplane. Given the lack of vertical guidance, ASR approaches typically have an MDH around 500 feet.

Controllers will provide vectors; however, if you are really having a bad day and have lost the directional gyro, you can request a no-gyro approach also called “no-gyro vectors.” The controller will say: “start turn to the right (or left)” and “stop turn” along with distances to the MAP and suggested altitude. Along the final approach course, the controller will state: “make all turns at half standard rate” (1.5 degrees per second).

Between June 1948 and May 1949, Berlin was encircled by the Soviets who imposed a blockade of the city and the only way to provide supplies to the population was through the “Berlin Airlift” conducted by western Allies. Part of the success of the airlift was the use of the Precision Approach Radar at Tempelhof airport. PAR is also called a ground-controlled approach (GCA); however, that more generic term could also include ASR approaches.

The weather was frequently low and the PAR was portable and quickly brought up to field operating conditions. In a PAR approach, a dedicated controller provides through voice communications constant updates of both azimuth and glideslope information. It is considered a precision approach due to vertical guidance. Today PAR approaches are provided at military airports. The locations of PAR approaches can be found in the Section N of the U.S. Terminal Procedures Publication.

Some military fields might allow civilian aircraft to fly these approaches (without landing) on a work-permitting basis but this practice seems to be waning. Perhaps consider doing a PAR approach (It would count as a precision approach in an IPC); however, contact the controlling agency beforehand. Practice “pop-ups” probably will not be allowed. Also note that PAR approaches can exclude glideslope information, practically speaking making them similar to ASR approaches.

Outside of the U.S., the ASR approaches might be called Surveillance Radar Approach (SRA) or Surveillance Radar Element (SRE). They are all similar in that only azimuth information and suggested altitudes are provided by the controller. An interesting approach is the SRE RWY 09 at Pindling International airport in Nassau, Bahamas. In addition to this approach, SRE approaches are also available for Runways 14 and 32. My comments cover all the SRE approaches at Pindling.

There are a few differences from the ASR approaches. First, notice that the SRE approach is for a particular runway while U.S. ASR approaches don’t specify a particular runway; rather they are approaches to an airport with MDAs for each runway. In the SRE approach, unnamed fixes are based on distance to the runway threshold, which is also the missed approach point. However, the notes do mention that VOR is required to fly the missed approach.

Also notice that the approach visibility minimum is reported in meters rather than statute miles and fractions. The MSA is based on the airport reference point rather than a navaid. Even though Nassau is only about 160 miles from Miami, it is important for pilots flying internationally to be aware of differences in procedures and terminology. Maybe next time I fly to Nassau I’ll ask for the SRE approach!

On May 8, 1978, on a dark foggy night, around 10:00 PM, National Airlines Boeing 727 Flight 193 was on a multi-city trip that originated in Miami and made several stops en route to its final destination, Pensacola, Florida. It did not make it. The flight ended in 12 feet of water in Escambia Bay on the final approach course to Runway 25 (today Runway 26). The last leg of the trip was a relatively short 60 NM hop from Mobile, Alabama to Pensacola. The Pensacola weather was “measured 400 feet overcast, surface visibility four miles in fog and haze.” There were 58 passengers and crew on board; 55 survived.

Due to construction, Runway 16 (now Runway 17) was closed and the associated ILS was out of service. Given the weather conditions, the captain accepted an ASR approach to Runway 25. (ASR approaches at Pensacola are no longer available.) This approach had an MDA of 480 feet (Or 369 feet AGL at the airport. We can assume that, being at sea level, over Escambia Bay, the MDA would have been 480 feet AGL). The landing minimum was 1 SM visibility. The weather seemed to be above landing minimums but 20 minutes after the unexpected water landing, the weather at the field was reported as an overcast ceiling of 300 feet, which was below the minimums.

Since weather can be fickle, actual weather conditions at the time of the accident were difficult to establish. A dark night was definitely a contributor to the CFIT. As is typical, accidents usually result from a chain of events; this was the case of Flight 193.

The NTSB identified several factors leading to the accident but a critical factor was the ASR approach. No vertical guidance other than suggested altitudes and lateral guidance were provided by the controller. In the synopsis of the report, the NTSB stated: “Contributing to the accident was the radar controller’s failure to provide advance notice of the start-descent point which accelerated the pace of the crew’s cockpit activities after the passage of the final approach fix.”

Before it is too late…

If you have a nearby ASR approach (or a PAR—see sidebar) or perhaps are flying a cross country near an airport with one, request one before all the ASR approaches go the way of the Dodo. You will be able to say: “in the good ol’ days, I flew an ASR approach.”