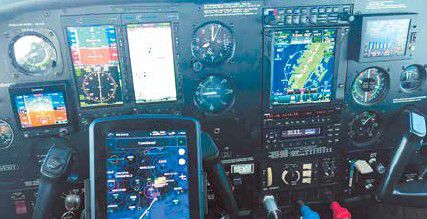 Since starting in 1984, I’ve logged over 1800 hours in more than 45 aircraft types. As much of this has been in the past four years under the employ of a major avionics shop, the recent experience factor provides a bit of confidence, especially since I’m quite familiar with most avionics offered today. A trip from Sarasota, Florida (KSRQ) to Newport, Rhode Island (KUUU) in one day is quite a haul, especially when the final leg will likely require an instrument approach without an operative autopilot. Hey, let the adventure begin!

The mission was to deliver a Cessna T210 to its owner, who was over 1000 miles away—in one day. I picked a day that had the most favorable weather in early October. The main avionics consisted of a GTN 750 GPS nav/comm, Aspen EFD 1500, G5 standby attitude indicator, and GTX 345, providing both ADS-B In and Out. The remaining equipment was factory installed and included accompanying round dials— but no operative autopilot.

Mitigating risk was the first priority. Would I be able to fly for almost eight hours without an autopilot and safely execute an instrument approach at the end of the day at sunset? Probably not. So, I worked out a plan to bring along Larry, our avionics Service Advisor, who has some flight time as a student. I will work him in “heading mode” and let him do much of the straight-andlevel work while my brain stays relaxed and refreshed as I simply point with my pen, offer sound instruction, and study the busy New York airspace that we’d encounter.

The first leg was to Hilton Head Island, SC (KHXD), to provide a scenic place to log another island landing. The 2.5-hour flight also happens to conveniently coincide with my bladder endurance. The IFR leg only offered a few tenths in IMC, and the weather was great. Larry performed well and applied valuable learning experiences with the aircraft, the avionics, FMS programming, and ATC dialog. We debriefed the flight and decided on Norfolk, VA (KORF) as the next planned stop.

As we departed on the second leg to Virginia, I could see progress with Larry. Aircraft control was excellent, and a more informed and confident pilot was now at the controls. This leg was all VMC, and the workload was low.

We took a nice break in Norfolk, where I advised Larry that the last leg to Newport would be mine with occasional “autopilot” assistance as needed from him. Little did he know that this would become the most valuable dual he’d ever received. I also took the time to thoroughly check the weather for the final leg, and it consisted of heavy rain and hard IMC.

No, Not That Way

The IFR departure from Norfolk under VMC was beautiful with the ocean and the large ships below. Thirty minutes later, we were in IMC where we’d remain. It was smooth, with Larry performing well, on heading, and holding altitude. Center soon asked to advise when ready to copy a new clearance.

This is where I found that I should have studied the low altitude chart a bit more. That would have at least had me looking in the right direction as Center rattled off waypoints. But hey, I have a GTN 750.

The GTN 750 is my favorite piece of equipment and having ADS-B In proves invaluable. It’s intuitive unless your brain is currently being overworked. While hustling to input the new flight plan, I noticed that it was difficult to read because of the routes showing from the initial flight plan. If you have ever put in an airway in the northeast, you will see every single waypoint along that route in the flight plan page, and it quickly becomes multiple pages.

Of course, now we are experiencing heavy rain, and Larry is keeping the aircraft upright and on course, or pretty close. I ended up just asking for a vector to the first waypoint, so we didn’t gain too much attention while re-sorting the route. Taking a deep breath, I went into the GTN and started removing the airways. But there were many, so I ended up deleting the entire flight plan and started from a known situation. It was only later that I discovered the GTN can collapse an airway into one flightplan entry. Doing that would’ve helped.

It was not long after that when ATC came back and provided another new clearance. I asked for the vector to the first fix and this time quickly make the change as my learning curve was soon applied. And of course, with the two route changes, the feeder route still ended up being the Sandy Point VOR (SEY).

Providence Approach advised me to expect vectors to the LOC Rwy 22. The ceilings were 800 feet AGL, and we were IMC at 2000 MSL with heavy rain. I programmed the GTN and glanced at the Aspen to see what appeared to be the correct final approach course dialed in. We were being vectored from an initial heading of 040 degrees. It was time to give Larry another break and demonstrate the localizer approach.

ATC soon said, “Four miles from SMARI. Turn right heading 190 degree. Maintain 2000 until established. Cleared for the LOC 22 approach.” I made the turn and did not see a live needle. I expected a fly-left indication, and the approach course appeared to be correct except for the one small green arrow representing FROM—the wrong direction. How could that be? The GTN should have auto slewed the needle for me when I activated the approach— right? Well, it didn’t, so a quick turn of the course knob 180 degrees to the final course of 219 brought things to life.

I also learned later that the Aspen does display an ambiguity flag (To/ From) on a localizer, but the needle is only “alive” when the course is set within 100 degrees. So, when I turned to 190 degrees and saw life in the needle, I continued the turn inbound, which got ATC’s attention. They asked if I wanted to be brought around again, but I had just corrected the error and was far enough out from the fix to get established on the final approach course quickly. 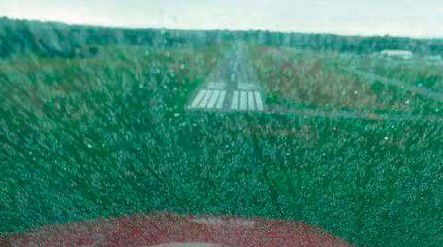 Now the fun part—beginning the descent while still in heavy rain with daylight fading quickly. With the reported 800-foot ceiling and heavy rain, we descended to the localizer minimums of 548 feet AGL—quite sporting. It was so sporting that I decided we would be heading to our alternate at Providence (KPVD) for the ILS over there if we missed.

At 5.9 miles to the runway, I set up for 90 knots, gear down, flaps at 10 degrees, and started the timer. Yes, the timer. Once I realized that I forgot to apply my five T’s earlier, which had already bit me on the “twist,” it was not going to get me again. Of course, the GTN also provided what I really wanted
to know, which was the distance to the missed approach point (MAP). I’ve now got less than four minutes to find the airport in what is still heavy rain and just about the minimum one-mile visibility.

I make a few callouts to Larry. “Three miles; keep looking for that runway.” (And yes, I made sure to light up the runway on the CTAF). We see a pasture, then a creek, a barn, and this seems to repeat for quite a while with the same scenery. I am pretty sure there is an airport out there, and I’m right on the localizer. One mile to go, I see the runway; I went through my GUMPS check again, pulled the power, and set her down after a long day. Interestingly, Larry never had the airport in sight until short final.

What seems like such a simple approach ended up being a big deal at the end of a long day. I couldn’t have done this adventure alone in one day without an autopilot—or Larry in this case. It was smart that one of my pieces of risk management contributed significantly to the safety and success of this flight; and Larry did a few nice take-offs and landings.

If this had been a solo trip, I think I would have cried uncle at the first request to change routes and asked ATC to provide vectors. However, the big takeaway was not just missing my five T’s; it was understanding the nuances of how the equipment operates. The GTN will only auto slew the Aspen in GPS nav; it takes a twist to work the localizer. I was so used to flying Garmin navigators with a Garmin EFIS, where GPS and the loc both get auto slewed. This plus the collapsible airways told me that I didn’t know the GTN as well as I’d thought and I vowed to study it further.

Being in the avionics business, I know I am not the only one who has become complacent on automation. Do yourself a favor now and then and fly the airways via VORs; make use of Time, Turn, Tune, Twist, and Talk; perform a VOR/LOC approach and challenge yourself. Turn that AP off and increase your workload with a safety pilot or instructor. One day you’ll be glad you did.