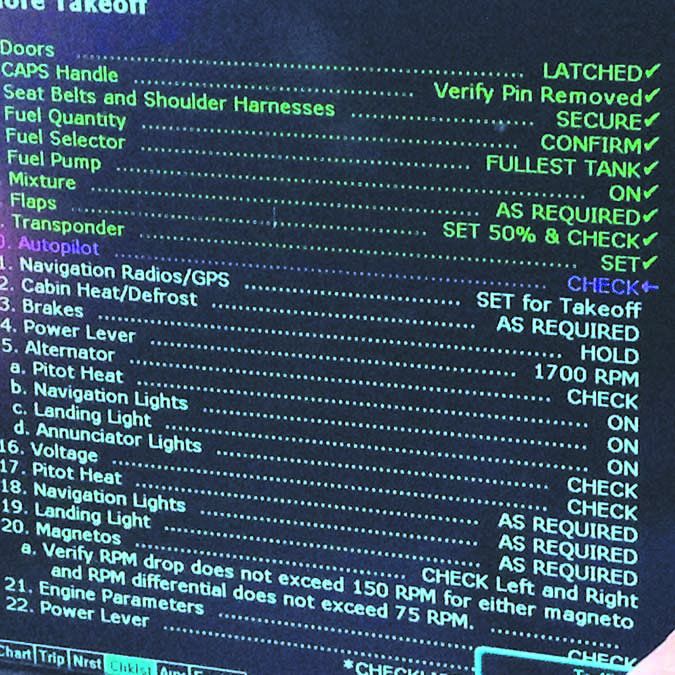 Checklists get taken for granted—settle into your seat in the cockpit, pull out the booklet or laminated cards, turn to the “Before Engine Start” page and start following the steps. Fire up the engine(s) and proceed down to “After Engine Start” and “Before Taxi.”

Sound familiar? For most flying under 14 CFR Part 91, this read-then-do routine is the norm all the way to “Parking and Securing.” While many pilots with a fair amount of experience—particularly those with their own aircraft—will often go a step beyond and make their own checklists, there are far more efficient methods to get things done on time and in the proper order.

Start by stowing the standard checklists. This is because these documents have their roots in the manufacturer’s manuals and handbooks, which are designed to instruct the pilot on how to do something, like shut down the systems and engines. That, and the lawyers typically have a thorough review to make sure everything is complete and there’s nothing that could cause any liability.

So once you’re well versed on how to do these tasks in a given aircraft, you can replace that how-to-do checklist with cockpit flows and self-checks that you can accomplish in less time, all the while actually thinking your way through stuff. Sounds worthy of a knowledgeable PIC, doesn’t it?

So what’s wrong with using a given checklist, especially if you’ve tailored your own? If you have a set of checklists that work for you all the time, great. The biggest problem with the manufacturer’s checklists is that they’re bulky enough that they often don’t see the rigorous use in flight as one might prefer. Even if you have personalized your own checklists, they likely don’t differ all that much from the original checklists.

For instance, many personalized checklists include some important IFR-related tasks, such as instrument panel tests or approach briefings, that aren’t included in POH-derived checklists. Again, that’s great, but it’s likely that the new list is now even longer than the old one, when the goal is to make it shorter so it’s easier to use and thus more likely to be used in all phases of flight.

This bulk originates with the conceptual checklist template that has you following steps on things you already know how to do, like engine runups—any pilot worth her hundreds of hours of experience can do a mag check without following instructions on a printed checklist. These extraneous instructions are wasted space and don’t encourage much by way of leaving it up to you to perform the task of flying the airplane.

In fact, since many pilots learned to do things with canned checklists from the very beginning, they go about things following rote instructions rather than practicing a higher level of understanding and cockpit resource management. Later on, this can make training for advanced aircraft more challenging, since pilots must then adapt to the other methods we’ll discuss below.

Note that we’re not talking about eliminating checklists insofar as written guidance to structure your operations. Checklists are required to be available to the crew based on what’s specified in 14 CFR 91.503 (b) and (c): Startup, pre-takeoff, cruise, pre- and post-landing, shutdown and emergencies. But these tasks, and others, can be covered without the lengthy and ineffective to-do lists that come with the aircraft.

Even those aviators with nice resources beyond an old stack of checklist cards—well-versed flows, timer alerts and first officers—still miss and forget stuff. Why?

A 2008 FAA research review, “Checklists, Monitoring, and Multitasking in Cockpit Operations,” pointed out the patterns found in faulty checklist usage by flight crews. They included overlooking items, incomplete tasks, and confirming that things were done without actually checking the items in question.

Some had tragic consequences, such as crashes that occurred due to incorrect flap settings left unchecked by the crew. Distraction, workload and efforts to save time were among the reasons for overlooking tasks or deliberately deferring them for later, then forgetting.

Training, workload management and improving procedures were all noted as ways to mitigate safety issues. But CRM can never be fail-safe. It’s up to us to ensure that we practice flight discipline to the best level possible: (1) have good cockpit procedures in place, combining flows, checks and callouts; (2) do the tasks the same way every time, deviating only when necessary and when self-briefed on re-checking the tasks; (3) train and retrain to perform each task consistently (normal and emergency); and (4) understand the mechanics behind each task, should we ever need to actually think our way through a problem. Finally, checklists are for checking, not mere recitation.

Read-and-do checklists are often tedious to the point that they cause bad habits. Take startup. Typical engine-start checklists for a piston airplane list separate line items for each detail, such as “Throttle – OPEN ,” “Propeller – HIGH RPM,” “Mixture – FULL RICH,” and so on. All three of these controls are lined up right there, and you already know where to position them, so why have separate lines for each? The result is that most pilots will just skip this part and put the throttle, prop and mixture in the appropriate positions, or move one control at a time while reading the checklist because they’re trained to do it that way—wasted space, wasted time.

Another problem is redundancy. There are checklists out there, for example, that have you confirm three times that the fuel selector is properly positioned, even for an aircraft with one engine, two tanks, and normal operation on “Both.” While some checklist designers (or their lawyers) clearly wanted to beef up protection, most pilots fall into the routine of disregarding the redundant checks because they know the fuel selector wasn’t touched since the original check.

Thus, another issue arises: If you’re consistently ignoring something, it’s time for a change. You’re being negligent, or the item is unnecessary, or it needs to be rewritten to make it useful.

One solution to the fuel selector example, besides removing the second and third checks, would be to change “Fuel selector—CHECK” to a simple test selecting the right and left tanks, ending with the appropriate setting, to ensure it all works normally. Better yet, incorporate this item into a cockpit flow that accomplishes several pre-takeoff checks into one task. More on that later.

From a safety standpoint, using ineffective checklists breeds bad habits. Repeatedly ignoring an item reinforces the idea that this is an acceptable practice, when it’s not. Make your checks work for you rather than trying to work around defective instruction lists every time you fly.

Wouldn’t it also be nice to eliminate most of the head-bobbing that comes with long, redundant, line-item checklists, not to mention the neck strain? How about this: Your entire “normal” checklist ought to fit on two sides of one kneeboard-sized card or a few pages on a digital checklist. Now that would be ideal.

Reducing checklist sizes will eliminate a lot of heads-down time in the cockpit, which is bad for maintaining situational awareness on the ground and has caused many incidents, leading to new rules to keep the crew heads-up while moving on the ground.

Since we all know how tempting it is to start fiddling with that checklist during taxi, knowing a long pre-takeoff checklist awaits at the hold-short line, how about eliminating nearly all of that small print so you can do your thing and get airborne? There’s a great system to reduce that idle time on the ground, eliminate bad habits and encourage more heads-up. Sound good? Time for flow and check.

You really aren’t new to flow and check. Rejected takeoffs, go-arounds and certain emergency procedures (engine failure, engine fire) all require muscle-memory procedures and logical flows around the cockpit. You’d never actually read the “Balked Landing” checklist to go around; you just do it: Takeoff power, takeoff pitch, airspeed, flaps, gear up. You know without thinking that those first steps will come quickly and automatically, and you’ll ensure your go-around is safe before completing the rest and, finally, using the checklist.

By the way, you’ve also been evaluated using flow and check. Checklist use is part of every practical test, and the standards note that when “reading the actual checklist may be impractical or unsafe,” using “memory” items followed by a checklist “review” is expected. Really, most normal and emergency operations should be accomplished this way.

Flow and check puts the main operations into logical sequence, then leaves each task up to you. Callouts, when appropriate, can supplement flows and checks. Then, finish with a checklist to ensure you’ve completed every task.

For example, the after takeoff flow, once at VY and out of runway, might go like this: Gear Up, Flaps Up, Power Set, Fuel Pump Off, Lights Set. You can achieve this—keeping your eyes mostly outside—by moving your hand from the gear to the flaps and around the panel, perhaps with callouts for each item to reinforce the muscle memory. Then, above 500 feet or more, confirm everything using the after-takeoff checklist.

A word to the wise: Be sure you continue to think your way around, rather than mindlessly or randomly pushing buttons and pulling knobs. For example, when performing a shutdown, follow the same flow every time: Electrical, Prop, Throttle, Mixture, Magnetos, Master. Then check the list. Don’t allow distractions to make you forget something. Many magneto and master switches have been left on by rushing out the cockpit door or doing stuff out of order.

So flows and checks accomplish some desirable things: They get rid of the rote, time-consuming checklists, let you decide the most efficient way to get stuff done, keep you heads-up and encourage you to take charge of things. Revamping how you operate in the cockpit could take some time to get used to, so to create your own flow and check system, take the best of what you have been doing, roll it into the new routines, and do some flight testing until you’re satisfied.

Next up: We’ll look at how to create your own flows and checks, and create a package that works for you.

Elaine Kauh is a CFII in eastern Wisconsin. She has yet to forget to check for a full coffee mug before engine startup.