For most of us, flying is a passion we absolutely do not want to give up. This article will discuss clues on when it is time to reconsider your flying status. Even in our prime, we humans are not good at self-assessment. To be a pilot requires self-confidence, but when might that become self-delusion?

During my career, I had the opportunity to work with the safety department of a major airline. They had multiple safety initiatives, and they had an excellent safety management system overall. In one study, they surveyed all their line pilots and asked them to assess their ability vs. their peers. Interestingly, 80 percent of the pilots graded themselves better than the average pilot at their airline. Said another way, 30 percent of the airline pilots thought they were better than they were.

To remove that natural bias, the Navy has a grading system that helps prevent the naval aviators from thinking they are better than they are. During qualification for carrier landings, each approach and landing is graded by the Landing Signal Officer. The score for each aviator is then posted in the ready room. Receiving passing grades on the initial carrier qualification flights does not mean “permanent qualification.” The Navy grades every carrier landing and expects steady improvement.

While we are on the subject of airline pilots, remember when an airline pilot had to retire from flying at 60? Fortunately, in 2007, the FAA reevaluated that regulation and changed it to 65. Lobbying for the change, the House Transportation Committee Chairman at the time, James Oberstar, said: “Each day that passes without raising the retirement age to 65, approximately five of our senior, most experienced pilots will be forced to retire.” It should also be noted that Japan’s civil aviation authority raised the mandatory retirement age to 67 in 2015. More recently, the FAA reauthorization bill specifies a mandatory retirement age of 70 for pilots in
large Part 135 and Part 91K operations. The trend for older pilots is in a positive direction. Boeing changed the CEO’s mandatory retirement age from 65 to 70. After all, 70 is the new 60!

Many pilots continue to fly with the utmost competence well into their 70s and even into their 80s. I’ve flown with pilots in their 70s who I considered among the best. And that’s no small praise. For background, as a flight test engineer, I have flown with some of the industry’s most notable and best test pilots. Additionally, I’ve had the honor to fly with numerous other pilots from Cessna, Dassault, DGAC, Honeywell, Nextant, and Saab. It was a privilege to fly with each one. But, we all get older. Even Chuck Yeager realized his limitations later in life—he often flew an Aviat Husky with a copilot.

As an analogy, in the earliest days of digital avionics computers, we thought the microprocessors (think Intel 8086) could check themselves and determine if they were operating correctly. We quickly learned this wasn’t a good approach. Avionics computers operate on a real-time processing loop. The microall its tasks before it starts over again in the following computational cycle.

However, in some avionics like Flight Management Systems, the computation task varies. Occasionally the computer would overrun its allocated time frame. When it did that, it was useless. The same thing can happen with the human pilot. Flying singlepilot IFR in busy airspace and adding a glitch can push the workload past “tilt.”

In the computers we used a “watchdog timer.” The timer is an independent circuit that has to be reset by the computer when it finishes its normal processing loop. If the timer expires before it is reset, the circuit logs an error and resets the microprocessor. If it happens three times in a row, the computer is taken off-line. Similarly, a pilot’s judgment on their capability also needs an independent check.

(When I mentioned a watchdog timer did you think of the avionics engineer’s joke about future airline flying? Instead of a pilot and co-pilot there will just be a pilot and a dog. The dog’s job is to bite the pilot’s hand if he or she touches anything.)

What would be a good “watchdog timer” for pilots? Seriously, what are good checks to independently gauge your fitness for flight? Too often, taking oneself off line happens only after a minor accident or incident.

Medicare will pay for “Wellness Tests,” which can include a cognitive assessment. There are three common cognitive tests. Depending on the test, they can be performed in five to ten minutes. The cognitive test is simple and pain free. The nurse will give you a short list of words or a line to remember. It will often be an address in some town. The nurse will have you do several other tasks like copying a drawing or identifying objects and then come back and ask you to repeat the address. But you might be asked the state first, then the street.

If you have done the assessments every couple of years you will be able to pick up on when the noggin is not processing like it used to. Age does not have to mean cognitive decline. After all, Berkshire Hathaway is run by Warren Buffet and Charlie Munger who are 90 and 97 respectively. 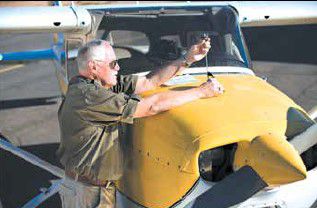 Another technique to determine your mental fitness is to fly with an objective instructor who is not financially tied to the outcome of the evaluation. Another hint, do your kids not want Grandpa or Grandma, flying their kids around? Does your car have unexplained dents and dings? All these things could be good clues that you should consider giving up being pilot in command.

Besides the natural deterioration with age, there are traumatic life changing events which can add stress and further erode judgement and decision- making skills. These include the loss of your spouse, a change in living conditions (moving to a new location) or loss of expected income.

Okay, so you make the decision to hang up your goggles. But, you don’t need to get rid of the airplane. You can revert to flying second in command rather than solo. There are plenty of good, qualified younger pilots who’d be happy to build hours flying your aircraft as pilot in command.

The AOPA Air Safety Institute has a good publication “Aging and the General Aviation Pilot — Research and Recommendations.” Besides cognition, it goes into physical health, proficiency, and other factors. It also has an extensive list of references with a synopsis. Also, there is a good video series on YouTube https://smartpilot.ca/en-US/home/143-airmanship/airmanshipfeatures/ 890-the-aging-pilot. It is a study from Canada on Aging Pilots. It goes into depth on aircraft simulator studies done at Carleton University. Both studies indicate that flying more, not less, improves the in-flight cognitive decision making. —BT

Or, get a realistic desktop simulator and fly whatever aircraft you want. X-Plane 11 is my choice, but you might have to get one of your grandchildren to set it up. Flying the aircraft is the simple part. To add realism, you can get actual current weather visuals and topographical maps down to the individual street level to enhance the simulation. There are even navigation database services. Thankfully, they are cheaper than the subscriptions for your panel-mount boxes. You can even provide “real world” experience with Air Traffic Control services available from VATSIM and PilotEdge.