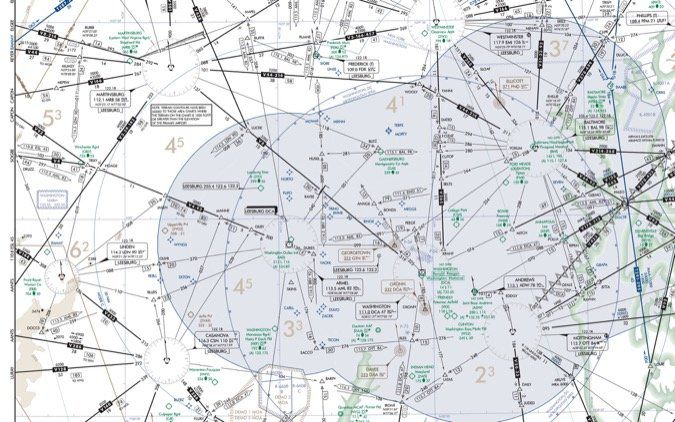 Feedback on our sim challenges has been masochistic appreciation of nasty stepdowns and harsh tailwinds. This time we’ll build on that by doing stepdowns with a twist—literally. One of our approaches is a head-scratching DME arc to the missed approach at Martin State Airport (KMTN). It’s a constantly changing final approach course from the days before cool RNP. And it’s available to anyone with a real VOR and DME … or maybe even GPS.

Before you can land at KMTN, however, you must depart it and run an errand you can’t do in the real world: landing at Regan/National at the frozen heart of Washington, D.C (KDCA). Pretend you’ve got a charter gig running new cabinet members to Washington and flying the recently resigned ones out. Business has been brisk recently, so get crackin’.

We won’t make it too harsh. Put the ceilings at about 1200 MSL throughout with visibility two miles. Winds at the surface can be light from the southwest or even calm, but winds at 3000 feet should be 230 at 35 knots. If you want to be nice to yourself, make the clouds a thick stratus deck with no turbulence. For more of a challenge, make it cumulus and your sim will probably toss in the turbulence for you.

Pick a slow plane the first time through if you want a practice run. The real challenge comes with something faster. The faster, the better.

Taxi out for Runway 15 at KMTN. Your clearance is runway heading, vectors, direct. Climb and maintain 4000. Be sure you review any departure information (no you weren’t assigned any charted departures). Launch and then clear yourself on heading 170 to intercept DCA R-074 to GEEMO. Amended clearance is GEEMO OTT KDCA. They like messin’ with you. (And if you don’t do it right, you get shot down.)

Crossing OTT, say the secret password of the day—Diet Coke—and get direct KATRN, cross KATRN at 2500, cleared ILS or LOC DME Rwy 1 approach. If you can’t self vector with the map or iPad, fly heading 260 to intercept. Nothing fancy; just a diminishing tailwind ILS to a landing.

Now the fun starts. Review the VOR/DME or TACAN Z Rwy 15 for KMTN. You’ll start at SLOAF, so head direct SLOAF from WOOLY or EMI as applicable. Set yourself up to fly the arc, but be warned: You’ll have a rough time finding an overlay in your GPS. Fly it all the way to the MAP and land—if you can—and boast to your friends that you flew the arc within 0.1 DME.

If you can’t land, enjoy flying the missed approach—even more of that arc—ending at BOAST. Really, you get to boast either way.

If you did land, turn around and depart Runway 33, thence… Or, if you missed the approach, hit the hold at BOAST and then depart it heading 010 degrees until you’re back over KMTN (roughly), thence…

…fly heading 270 to intercept R-204 from EMI. Climb and maintain 4000. Once on R-204, descend and maintain 3000 and intercept the localizer for the LDA Z Rwy 19. (If you try this sim challenge a few times, try the LDA Y Rwy 19 for variety.) Fly it well and let yourself see the runway where a 3.04-degree approach would take you to the touchdown zone. Land on a U.S. runway than isn’t technically in a U.S. state.

1. You did load one, didn’t you? If you don’t do that during practice, how will you do it in the real world? Our recommendation would be the LDA Rwy 33 to be able to turn around quickly and head back in. The non-RNAV option of the LDA can be helpful if you’re using the GPS for navigation right away in busy environment so you don’t have to reprogram it if you don’t use the emergency return.

2. None, you’re on a sim. OK, really, KMTN is outside the special flight rules area, so you don’t need to use those procedures, but it is within the area requiring the online training program about the special flight rules area. Of course, try to fly into DCA for real and the helicopter gunships will ensure you don’t make it past localizer intercept.

3. You could dial up the DCA R-074, intercept it, and then fly GPS direct to GEEMO. But, a better move would be GPS direct to GEEMO on a course of 254. This creates a leg in the flight plan that you’d intercept without switching nav sources and allows waypoints to sequence automatically. The GPS sensitivity changes about 30 NM from your destination from either 2 NM full-scale (WAAS) or 5 NM full-scale (non-WAAS) down to 1 NM. Because GEEMO is just under 30 NM from your destination, the GPS scale will depend on where you intercept the radial.

4. Because there isn’t one. Note that this approach says, “Radar required” in the plan view without any “or.” Radar is required and there’s no substitute because the approach starts at an IF. You must be vectored onto the approach. Unless you have add-on ATC, it’s a good thing we’re flying a sim.

5. The fine print of the departure procedure says you must take off in first 3600 feet of runway if you can only climb 200 fpm. Maybe that’s a non-issue and didn’t matter, but did you know that for a fact or just luck out? Always read the notes.

6. The top altitude is published as 5000, so if the departure is part of your route, that’s the altitude you climb to unless told otherwise. Interesting aside: At the time of this writing, we’re still getting clarification on a recent change to procedures on issuing SIDs and the possibility controllers should tell you to “maintain 5000” even though the top altitude is published. Look for a future article once we get that locked down (and before they change it again).

7. Even though this departure can be in the GPS, it’s a good place to have a simple VOR backup. There are vectors that put the GPS in a pause mode and then it sequences, so it’s easy to blow away your navigation with an early button push. This is not airspace where you’d want to mess up (if you were allowed to fly there).

8. You won’t find it in there. Given recent changes to FAA policy and the AIM, GPS might substitute for DME for lateral guidance on an approach, but you’d probably need the approach in the database. That said, you can still leverage that GPS. Try this: Put BAL as the active waypoint and then activate OBS mode. Now you have a distance on the GPS screen and can twist with the CDI each stepdown. If you also activate a bearing to BAL (or use a bearing pointer on a PFD) you can fly a perfect arc holding a distance of 14.7 DME and headings roughly 90 degrees to the current bearing. You need a real DME to verify but it’s lot easier than using the GPS screen.

9. It’s tough, but you get a bonus because the MAP is 1100 feet before the threshold for non-military aircraft.

10. If you’re Part 91, do whatever you want. But it looks like all the departures require either a non-standard climb or a visual climb over airport.

If you’re still reading and not flying—either in an actual simulator or the simulator of your mind—stop here and fly it. Then, use these questions to gauge your performance and give yourself even more to think about.

– What procedure did you load for an emergency return to KMTN?

– What special authorization do you need to fly in and out of MTN?

– How would you set up your intercept of the DCA radial to GEEMO using GPS? If you were using GPS to intercept a radial, how far from that intercept would you be when the needle first started moving?

– Why didn’t we send you to the IAF on the ILS or LOC/DME Rwy 1 approach?

– Departing Runway 4 from DCA, what was your takeoff abort point? If you didn’t have one, how did you know it didn’t matter … or did it?

– What altitude did you climb to on the National Seven departure? Don’t say we didn’t tell you; we did.

– How did you set up the National Seven departure on your panel?

– Have fun loading that VOR/DME arc into your GPS? Can you even fly this thing with GPS?

– Could you land at KMTN from the missed approach point?

– If you had to fly the KMTN Rwy 33 departure and couldn’t depart in visual conditions and couldn’t make 321 foot per NM to 4300, what would you do?

Bonus for Jepp users: You didn’t fly a missed at DCA, but the ILS has some high-profile objects off the departure end of the runway in P-56B. Jepp shows the Washington Monument and the Capital Building in the bigger area, but doesn’t show you what’s in the smaller one. What’s in there?

This Sim Challenge is all about anticipation for stepdowns and turns. Next time it’ll be something different, but equally cruel. Come on; you know you like it.