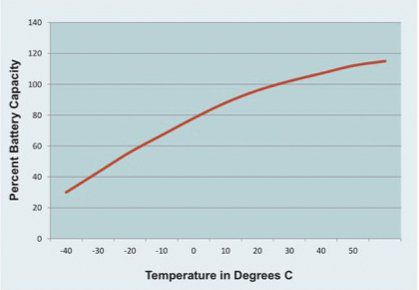 Albert Einstein is reputed as saying that everything should be made as simple as possible, but no simpler. In March, “Manage Your Electrons,” attempted to explain certain concepts and principles without overwhelming readers unfamiliar with batteries and electrical systems. In so doing, we may have violated Einstein’s directive, because we’ve gotten a lot of mail complaining at our oversimplification. So, here is a more detailed explanation of much of what we conveyed in that article.

Let’s start with an explanation of how electrical current, voltage, power and charge are related to each other. We will be using the International System of Units (SI) in the following explanations.

Power is defined as the amount of energy produced in a given amount of time, also called the rate of doing work. If current is the rate of flow of charge and voltage is the energy per unit charge, then it follows that in an electrical circuit, power (in Watts) = voltage (in Volts) x current (in Amperes). In the simplest of terms, work is done (energy generated) by a charge when it moves between two points across which a potential difference exists.

Still with us? Let’s see how this comes together in our airplanes.

The sulfuric acid is made up of positively charged hydrogen ions and negatively charged sulfate ions. The sulfate ions react with the lead on the surface of the negative plate, forming lead sulfate and releasing two electrons from each reaction into the electrolyte.

At the positive plate, sulfate ions and hydrogen ions in the electrolyte, and the free electrons in solution, react with lead dioxide molecules, forming lead sulfate and releasing two water molecules into the electrolyte solution.

The result of these two reactions is an electron deficit (a positive charge) at the lead dioxide plate and an electron excess (a negative charge) at the lead plate. This imbalance results in a potential difference (voltage) across the two plates. When a load is connected across these plates, electrons flow from the negative plate to the positive plate. As the battery discharges, the electrodes get coated with lead sulfate and the electrolyte becomes mostly water.

To charge, an external power source is connected across the battery, forcing electrons to flow into the negative plate and removing electrons from the positive plate. The chemical reactions are now reversed. The electrons combine with the lead sulfate at the negative plate, releasing sulfate ions into the electrolyte, leaving behind a lead plate. At the positive plate, the removal of electrons causes the lead sulfate to react with the water molecules in the electrolyte, resulting in the release of sulfate and hydrogen ions into solution, leaving behind a lead dioxide plate.

Variations of the basic lead-acid battery include the deep-cycle battery, the valve-regulated lead-acid battery (VRLA) also called the sealed battery and the recombinant gas (RG) battery. All these operate on the same general principle but incorporate various design modifications to improve the overall portability, safety, and performance of the battery.

Batteries have a rated capacity, expressed in Amp-hours (Ah), defined as the nominal capacity from a fully charged battery when discharged at the one-hour rate to the specified end point voltage (EPV) at a temperature between 21 and 25 degrees Celsius. At EPV the battery is considered fully discharged. For instance if a battery is rated at 10 Ah, we can expect it to last an hour under a 10-Amp load, if the temperature stays within 21 and 25 degrees Celsius. This one-hour rate discharge current is often called the C-rate.

How long a battery lasts before being depleted depends on how quickly it is discharged. The empirical relationship between discharge rate and capacity is called Peukert’s law. In practical terms Peukert’s law tells us that if the discharge current for a battery is low, the battery will last disproportionately longer (as shown in the sample graph on the facing page). Also, older batteries have a shorter useful life between charges.

A rechargeable battery’s capacity changes with the rate of discharge because the chemical reactions that generate electrical energy start at the interface between the plates and the electrolyte and only after a finite period of time (which depends on the design of the battery) spread through the entire volume of each cell in the battery. The battery’s internal components (the plates, electrolyte and interconnections) also present an internal resistance. Energy is lost as heat inside the battery because of this internal resistance. Higher discharge currents result in greater energy loss and heat buildup.

Thus it makes sense that if you experience an alternator or generator failure, reducing the load on the battery and consequently reducing the discharge current, by switching off all but the most critical loads, will give you a better chance to bring your flight to a safe landing, even if that landing is at an airport you had not planned on visiting.

Let’s use the 12-volt Concorde RG-25, a common GA battery, as an example. It’s rated at 22 Ah, meaning that under ideal conditions (fully charged, relatively new, modest temperature) it can deliver 22 amps for one hour.

If you think of this (incorrectly) as linear and you reduce the load to 11 amps, you’d now expect two hours of battery life. However, at this lower discharge rate, the battery will produce around 27.5 Ah. This means that it’ll deliver 11 amps for not the expected two hours, but closer to 2.5 hours.

Capacity Loss due to Sulfation

Battery capacity also reduces with each charge/discharge cycle. The lead sulfate that forms on the plates of the lead-acid battery as it discharges, changes to lead and lead dioxide as it is re-charged. However with each cycle some lead sulfate will slowly convert to a stable crystalline form. This is called sulfation and results in the loss of active material needed to generate electrical energy.

While sulfation over time limits the number of charge/discharge cycles a battery can survive, insufficient charging during normal operation will also cause sulfation, shortening the useful life of the battery. Batteries stored for long periods of time are also subject to sulfation due to gradual self discharging. That’s why it’s important to keep a properly designed battery charger/maintainer/desulfator connected to your battery between flights.

The best course of action is to follow the guidelines set forth in the Component Maintenance Manual (CMM) for your ship’s battery to ensure that you get the most use out of this vital component. Concord’s CMM can be found at www.concordebattery.com/otherpdf/5-0171.pdf.

Interestingly, Concorde recommends that at very low temperatures, you use the ship’s battery to start the engine(s) rather than external power. This counter-intuitive advice reasons that the increased temperature from rapidly discharging the battery during starting will allow better charging when it might not otherwise accept a proper charge at low temperatures.

Lead-acid batteries have come a long way from the very early examples in use over a century ago. However, just like every other component on your aircraft, they require proper maintenance. Proper maintenance and an understanding of how they work should help you in getting the most use of your aircraft battery when you most need it.