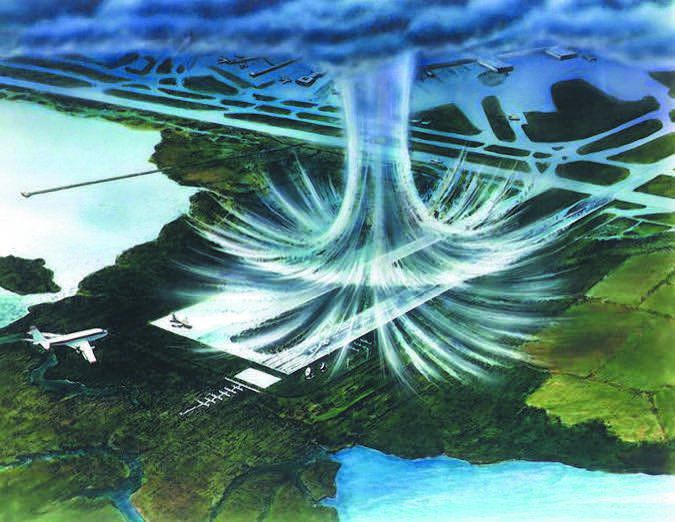 Really big winds and airplanes are not compatible. Of course, our first desire is to avoid those big winds. But, occasionally they sneak up on us even when we’re diligent about avoiding them. Then what should you do?

The kinds of winds we’re talking about typically come from storm cells and those are easy to detect with the right equipment. Radar is the most common, but it’s often not fiscally or physically practical in a typical general-aviation aircraft. That leaves two other choices: broadcast weather (a satellite service or FIS-B) and lightning detectors, also known as ‘spherics (for “atmospherics”).

All weather detection systems have limitations. Airborne radar needs precipitation to reflect the radio waves. Spherics detectors only see static and lightning. Broadcast weather suffers from delays that can make the information obsolete and dangerous. And none of those accurately detects wind speed and turbulence.

Consequently, operators must have an understanding of the capabilities and limitations of the particular system in use. With that understanding, we can do a pretty good job of anticipating and avoiding those thunderstorms and the windshear that might result.

Windshear is a dramatic change in wind direction or speed over a short distance. It can occur vertically or horizontally and at any altitude. Windshear exists within a storm cell where multiple shear zones can exist to create the turbulence that is most often the demon we must avoid. In this article we’ll look at windshear from dramatic outflow winds from a storm cell close to the ground, commonly called downbursts or microbursts.

Next month in his Wx Smarts article, Tim Vasquez will explain the meteorology behind microbursts and windshear, but we’ll cover a few basics here.

You learned long ago that there are three stages of a thunderstorm. First is the cumulus stage where the air flow is mostly up. The cloud is building and vertical currents can exceed 3000 fpm.

The second stage is the mature stage where there are still strong upward air currents, but some of the air has run out of energy and starts down. This mature stage has both updrafts and downdrafts.

The upward movement of the air and ice particles and friction with the adjacent downward movement of air and ice particles causes an exchange of free electrons. This results in some of the air mass being positively charged and the adjacent air mass being negatively charged. The result of the differential electrical charge is lightning, a key indicator of a cell that’s reached the mature stage.

The simple rules of thunderstorm avoidance are just that—avoidance. If you are flying in an area of unstable air, experiencing turbulence and see a cumulus cloud building, go around it. If you see a cumulus cloud that has started to display lighting, the cell is in the mature stage. Go around it. When the lighting stops or you see significant precipitation coming out the bottom of the cell, it has reached the dissipating stage. Go around it.

Use all the tools at your disposal to avoid penetrating a cell in any stage of its life, including using the “E” word with ATC if they have their hands full with other deviations and can’t accommodate your request in time to keep you out of the cell.

That’s fine if you can see the cell. But, if you’re in IMC and can’t spot the danger visually you should be relying on whatever weather display you have. If you have none, then, well, you should avoid the conditions likely to result in IMC with embedded cells you can’t detect.

Besides a storm’s ability to shred errant aircraft that enter a particularly violent cell, a microburst or severe downburst close to the ground is one of the greatest windshear threats. After some initial confusion and denial, this phenomenon is now well accepted and understood. In fact, the FAA issued Advisory Circular 00-54, “Pilot Windshear Guide,” in 1988 that remains unchanged and provides excellent information.

Now, with that background out of the way, let’s examine what you should do if you mistakenly fly into a downdraft or microburst.

The danger we’re discussing here is close to the ground, during takeoff or landing. Recognition and escape are largely the same, so we’ll deal with both situations together.

Microbursts don’t come out of nowhere. They’re a product of strong cells, so when those are in the area you should be at your best. Precise, smooth flying becomes very important. You should be on your speed targets and well stabilized. With that smooth flying, any external disruption is easily recognized. But if your airspeed control is out of control, external factors are more difficult to recognize. With a stabilized vertical speed, indicated airspeed and power setting, if one of those parameters changes quickly or significantly and you did nothing to change it, then it was changed by a force outside the aircraft.

We’re not talking about a couple knots change in airspeed or a slight difference from your normal power setting. No, windshear causes changes in airspeed of 10 knots or more, or a significant difference in required power (plus or minus) for the same performance. When you see that, think windshear and get out.

Now, you might think that increasing-performance windshear is no problem. After all, you’re getting a boost in climb performance on departure or a reduction in the power required to stay on the glidepath on approach. But, what goes up must come down; that increasing performance can quickly reverse and take back all that it gave you and a lot more. So, with any windshear event, get out.

When you recognize that you have flown into a downburst or microburst, it’s critical that you begin your escape maneuver as quickly as possible. Even a few seconds can make a difference. By recognizing the downburst or microburst early, you can initiate the escape procedure at a higher altitude on approach and will have more altitude to lose during the escape. On departure, quick action can give you more altitude sooner. Even if you can’t out climb the downburst, it won’t last forever and the higher you are when you start the escape procedure, the less likely you are to impact the ground.

There are three aspects of your windshear escape: power, pitch and configuration. First is power. Start with maximum takeoff power. For many pistons, that’s just a full push on the throttle(s), but if you’ve got more (turbocharged engines), use it only if can’t arrest your descent. Our engines are amazingly durable; exceeding limits for a minute or less probably won’t matter. Hitting the ground will.

Next, you want to pitch up—way up to the edge of a stall. In a typical piston aircraft this will typically be around 10 to 12 degrees. Hold the pitch angle until you get the first stall-warning indication, then relax it just enough to stop the stall warning. Then raise the nose a bit again until you again get the stall warning. Repeat until you are clear of the downburst or microburst. We’re flying at the edge of the stall because that’s where the wing creates maximum lift.

Note that indicated airspeed, vertical speed and altimeter readings may be unreliable due to rapid changes in wind speed and atmospheric pressure. Thus, it’s best to fly angle of attack. If your aircraft is not equipped with an angle of attack indicator, use the stall warning as discussed.

Your objective is to extract maximum power from the engine and maximum lift from the wings. The windshear escape maneuver is not a normal climb or go around. It is an emergency escape procedure and should be thought of as such.

The last consideration is configuration. We just said that this is not a normal climb or go around. Thus, you’re not going to change gear and flaps positions until you’re safely out of the burst. Yes, your aircraft will climb better when clean, but getting clean often sacrifices a little performance or altitude that you can’t afford. Only handle the power and the yoke.

Of course, the objective is to never need the escape maneuver. So, study the weather patterns over the route you plan to fly. Learn to recognize the significance of low pressure areas and areas of unstable air that have high moisture content.

Learn the limitations of the weather equipment you do have. If your aircraft doesn’t have any weather equipment, avoid flying solid IMC in areas of unstable, moisture-laden air so you can visually see any dangers lurking ahead.

Practice. Take an instructor or safety pilot with you and practice the wind shear escape maneuver in your aircraft until you are comfortable flying the aircraft in that maximum-performance configuration. Better yet, master it first in the sim, then in the airplane.

Oh, and a little housekeeping: If you encounter wind shear on approach to a towered airport, you are required to report the encounter and when your escape maneuver is complete. Yeah, that’ll be foremost on your mind.