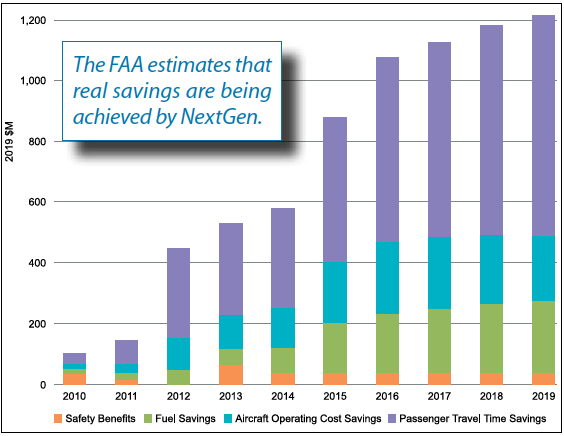 FCFS worked when aircraft were similarly equipped, with little reason to distinguish one from another. FCFS is an accepted principle of Air Traffic Management (ATM)—the many components that guide the flow of air traffic safely and efficiently. Under FCFS, users are handled without discrimination. Priority typically goes to the first aircraft using a resource.

On departure, service is generally provided to the first aircraft ready to use it, which might well be on the ground. Yet, at times, FCFS is too rigid. Improved safety and operational efficiency results by intelligent queuing, as by ordering aircraft in sequence for departure in different directions to maintain separation. On arrival, ICAO rules say, “the approach sequence shall be established in a manner which will facilitate arrival of the maximum number of aircraft with the least average delay.”

The Evolution of FCFS

FCFS is proving too simple for the times and is increasingly problematic. It is inflexible in a period of technology transition as we are with ADS-B, where there remain many unequipped aircraft. Nor does FCFS scale upward to promote the most efficient use of today’s advanced NextGen ground and airborne ATM capabilities. By itself, FCFS does not assure effective handling of advanced equipage, since it implies that all flights are handled as if none of them are able to use the new capabilities.

As ADS-B equipage nears 70 per cent of active GA aircraft, it becomes fitting to provide operational advantages to aircraft with advanced capabilities. The point has passed where we must wait for all users to equip before we transition to advanced operations, but there is no desire to exclude anyone. Instead, we need a system that recognizes the reality of mixed equipage. All of us, regardless of equipage, will benefit from an ATM system that has more than enough capacity to meet demand, and for it to operate with the best possible efficiency.

The first attempt to replace FCFS came in the original 2009 NextGen Implementation Plan, where the concept of “best-equipped, best-served” entered the aviation lexicon. Slick, simple, concise, and even flippant, BEBS said that being ADS-B equipped would get you better service than if you weren’t. “Best Equipped Best Served” described an ifthen mode of operation where those who invested in modern aircraft equipment would be allowed to take full operational advantage of their investment, almost in lock-step order.

This, folks, was pure salesmanship. Aside from being vague, ill-defined, and heavily-loaded, applying this catchy phrase in a real-world TRACON or ARTCC proved impossible. It is nowhere mentioned in the Controller’s Handbook. Speaking of ATC, no one consulted them, although their union representatives railed against it in many congressional hearings. Their angst was largely due to the complexity caused by mixing aircraft capabilities in dense airspace and the substantial workload increase. Giving service priority to aircraft based on equipage was nonsense. Nor was “best equipped” the best indicator of a flight’s capability—additional elements such as flight planning capability, and crew training required equal consideration.

Calvin Scovel, then DOT’s Inspector General, was skeptical. He testified that “a proposal to give preferential treatment to airspace users who install new avionics systems would be a dramatic change from the FAA’s historic ‘first-come, firstserved’ mantra for providing ATC services. The details of such a policy would need to be developed to ensure equity among users and implementation at specific locations.”

Pilots should see BEBS from the standpoint of offering differential rather than preferential services, a distinction perhaps lost on the IG. Sometimes BEBS is falsely defined as including or excluding users from, say RVSM airspace or flying a Cat II approach, but this is not BEBS in its pure form. These examples define broad categories of service and generally do not imply different individual treatment.

Inevitably, BEBS evolved. In its first iteration, BEBS became “Best Efficiency, Best Served” because the notion of efficiency was broader and equated efficiency with best service. This definition included not only the equipment aboard the aircraft but equally its operational capabilities, such as the qualifications of the pilot(s) and procedures that would have to be certified by regulators.

Variations of BEBS were tried. An M.I.T. thesis tested the twin concepts of Best-Equipped First-Served and Best- Equipped Exclusively-Served. System efficiency was not improved under BEFS and worsened by applying BEES. In both simulations, controller errors increased. In short, these variants failed.

Today, “Most Capable Best Served” is the preferred term by operators, ICAO, and the FAA. Here, the most capable flights can take full advantage of their capability to maximize the overall efficiency of the ATM system and of the flight itself.

For MCBS to work, regulators must be willing and able to certify advanced aircraft capabilities, perhaps including new-to-GA features such as CAT II approaches and autoland.

Tedious as it sounds, MCBS requires the Air Traffic Management system to be examined case-by-case, in every service volume, for opportunities to increase efficiency. Then the flight capability required of an aircraft must be assessed, followed by a determination of whether enough aircraft have the necessary capability. Also, no implementation of MCBS may introduce workload or other hazards without mitigation.

The MCBS flow shown above proposes a transition from a stable environment through two operational incentive steps to a new steady-state where a new capability has been agreed to by stakeholders or, more likely, has been mandated, like ADS-B Out. By that yardstick, the GA community at least is well beyond the majority, nearing 70 percent equipage.

MCBS might feel like paying a premium for better service. In the words of one consultant, it sounds like “class warfare in the skies.” However, true MCBS will accommodate both ADS-B and unequipped aircraft.

For example, consider Interval Management. IM is a form of most-capable automation that identifies an aircraft in trail behind another, “pairs” them, and suggests an airspeed for self-spacing. Both aircraft require ADS-B Out, and the trailing aircraft must positively identify the lead aircraft—the trailing pilot must be certain of the aircraft they are assigned to follow. The “Best Served” part is that tighter separation permits closer spacing safely.

As an unequipped aircraft, nothing changes from what we do today. That means vectors to approach gates, speed adjustments, and stepdowns. Indeed, mixed-equipage is still MCBS because aircraft not equipped will still receive needed services. Note that the ground equipment must be smart enough to recognize and treat airplanes accordingly.

It is hoped but unknown if “Most Capable, Best Served” can be applied without degrading the quality of service from ATC. Beyond that, could there be more than two levels of service?

Is it fair to additionally benefit those who can afford to equip? Operational benefits accrue to those who do, but this is not unfair to pilots who elect not to pay for the toll road. Even so, the comparatively negative impact should not mean encounters with every red light and traffic bottleneck along the way.

Today, the gains of equipping outweigh the savings of not, though not everyone is sold. One problem with MCBS in any form is that we can read it as winners versus losers. Perhaps a better way to look at it is that, as one study put it, “a better-equipped aircraft may be given priority over a lesser equipped aircraft provided the controller maintains the safe, orderly, and expeditious flow of traffic.”

You could equally contend that equipped users win more than others, but there are no outright losers. For instance, some airports offer pre-departure clearance service via data communications. Data-comm-equipped aircraft can depart more quickly and beat incoming adverse weather. Non-equipped aircraft benefit indirectly due to the operational efficiency that’s gained.

The evolution to full-blown NextGen is well underway. It’s become the greatest good for the greatest number. Lest we get too haughty sitting before our GPS glass panels on autopilot, remember that throughout ATC’s evolution from aerodrome to terminal to en-route control, one constant remains: requests made to ATC first are most likely going to be answered first.