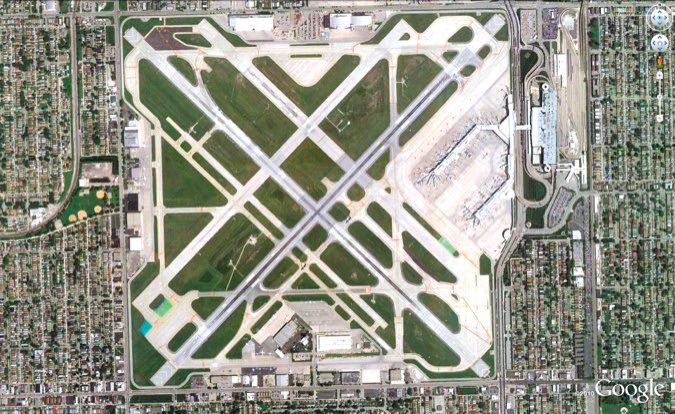 Pilots around Lake Michigan know there’s a popular route down the lakeshore with the Chicago skyline just off the wingtip. This offers fantastic views of downtown Chicago and is a practical way to transit from eastern Wisconsin to anywhere southeast of Windy City. You might even have a reason to stop at Chicago Midway and get areallyclose look at that famous skyline.

Filing out of KMDW is pretty standard for big-city airspace. You figure out where ATC is sending the departures and brief the expected procedure—there are two at Midway. The Midway Three Departure is simple in its makeup, but has some interesting twists and turns.

You’re flying via RNAV from Midway westbound to Cedar Rapids, Iowa. There’s an often-used route you select to file your flight plan: Northwest to the Polo VORTAC in Illinois, then direct to KCID. Due to winds, traffic flow and so forth, you’re assigned Runway 4L for departure. The advantage here is that you’re parked at the west-side FBO, which means your runway is just a short taxi. However, the tradeoff is that you’ll be spending a few extra minutes maneuvering over the city as you wind your way through the departure procedure. All the while, vectoring will be fairly constant, chatter and traffic will be heavy and yes, route amendments can and do happen.

Your clearance begins with a departure heading of 360 degrees from Runway 4L and a climb to 1400 feet. Then you’re to proceed via the departure. According to the text, everyone taking off from runways 4L and 4R gets this procedure: “Northbound departures assigned headings 360˚ (CW) thru 080˚, climbing right turn to 2400 heading 100˚ before proceeding on course…”

This means you’ll take off on 4L, fly runway heading, turn left to head north, climb to 1400 feet, then turn right to 100 degrees continuing your climb to 2400 feet. By then, you’ll be a mere 1800 feet over the middle of Chicago and flying opposite your desired course.

You don’t really know when you’ll be able to get above 2400 feet. You also will have to wait your turn (pun intended) to get vectors towards a heading that will get you going west and on your way to Iowa. By the way, PLL is 80 NM from Midway and you’ve requested a final altitude of 10,000 feet, which won’t happen until you are well clear of the class B.

When departing from the northeast runways with a westbound flight plan, the first phase of this departure really does set you up for spending lots of time down low and flying away from the route you want. Once you’re at 2400 feet, heading 100 degrees, your next vector will likely take you on another right turn, maybe south or southwest. You might even overfly Midway, backtracking across the same portion of city. After another turn or two (or more), you’ll be west of MDW, and you will at last be going the right way, but still maintaining 3000 feet or lower.

You glance longingly at the departure instructions for the other runways, which appear to have a lot less turning to do before heading on course. Those using the long parallel runways 13, 22 and 31 get to fly runway heading, or nearly so, before their initial turn. If you’re the type who’s not going to get too worked up about hanging out low over Chicago, you’ll be enjoying a great view of the Sears Tower, Lake Michigan, and even get a glimpse of Wrigley field.

If you tend to worry more about the risks of flying this kind of departure, you’re thinking about an emergency landing. Once you depart landlocked Midway there really aren’t any good options. Choices further diminish as you climb into the low Chicago overcast and even into ice.

Then you think about lost com. Say you lose the radios while heading 100 degrees at 2400 feet. If IMC, you’ll have to follow protocol and pick the highest altitude you were told to expect or were assigned. In this case, you were told to stay at 2400 feet and, as noted in the departure, expect clearance to your route and to 10,000 feet later on. This would be using your last assigned vector and your assigned routing while navigating clear of the congested airspace.

Regardless of the departure runway, nobody gets to go on any northerly heading for more than a minute or two. After the initial turns, the Midway Three then requires all departures to stay clear of the inner airspace at Chicago O’Hare. Your aircraft falls in the DME-equipped category, so the procedure advises you to make the first turn within 4 DME of one of the localizers at Midway, either I-MXT (used for ILS 31C) or I-MDW (used for ILS 13C).

Non-DME aircraft are instructed to simply remain south of the 096-degree radial of the DPA VORTAC, which achieves the same thing. The plan view of the departure shows that radial is the limit of your heading and you had better comply, lest you set off alarms at both airports. Assuming you’ve made it just fine to your easterly heading, you’ll get to climb maybe another 600 feet. With your engine gulping down that gas you bought to waive the ramp fee, you’re more than ready for some altitude.

Other considerations will depend on the day’s conditions. Regardless, you’ll need some speed flexibility in your piston single. Of course, you won’t have any problem staying below the 250-knot limit for departures. You’re more in the 150-knot category, and for today’s flight you’re inclined to keep it at slow cruise speed—about 120 knots—and just hope you don’t cover so much ground heading east that you end up vectored out over the lake below 3000 feet. For those willing to trade miles to avoid going over the water, it might help to buy time with a slower speed, or distance by filing a fix over land to the south.

The caveat here is you might need to keep your speed up as much as you’re willing to, just as you usually have to do going into Midway. Inevitably, you’re departing with a bunch of blue Southwest Airlines jets ahead and behind and going right to 250-plus knots. ATC at Midway is known to be really good at accommodating the much slower GA aircraft, but they’re still going to need your help to keep you in the flow. As long as you stay south of that critical boundary depicted on the departure, you ought to have ample space to maneuver and can expect to be below most of the other traffic.

Once west of Midway, things start going more in your favor. You’re cleared to your altitude, you have a few airports within reach just in case. You eventually even get direct to PLL. With your scenic skyline tour now behind you, it’s time to climb out, lean out, and enjoy another hundred miles or so of straight-and-level flight.