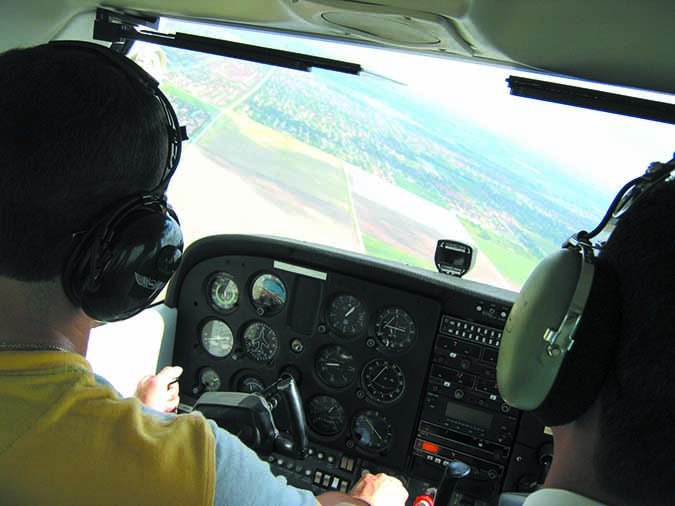 When an air traffic controller needs you to climb or descend quickly, they pepper their phraseology with “immediately,” “expedite,” or “no delay.” Is there a counterpart, for less stressful situations? Of course there is: “At pilot’s discretion.”

Even though it involves less urgency than a standard ATC altitude clearance, that phrase comes with some definite expectations. Some may be obvious. Others not so much.

ATC Needs Eyes on the Road at All Times

Controllers can’t just look where the traffic is now. We’re mentally projecting every route ahead to see future conflicts.

If I’ve got two 120-knot aircraft at the same altitude converging on a point 20 miles away, in 10 minutes they’ll be waving to each other. Something—like an altitude change—must be done in 10 minutes. If I need to use “immediately” in that altitude clearance, I screwed up by waiting way too long.

Now, let’s balance it. Let’s say I’m working you and your destination is in my airspace. Eventually you’ll need to descend. I project ahead along your route, examine speed and altitude, checking my other traffic. Everyone else is either headed away, or is above you. Final analysis: no conflicts.

Do I need you to descend now? Not at all, but you still need to descend sometime. So, why not leave it up to you? “At pilot’s discretion,” I tell you, “descend and maintain 3000.” You acknowledge the clearance.

Let’s look at the Pilot/Controller Glossary: “When used in conjunction with altitude assignments, [pilot’s discretion] means that ATC has offered the pilot the option of starting climb or descent whenever he/she wishes and conducting the climb or descent at any rate he/she wishes. He/she may temporarily level off at any intermediate altitude. However, once he/she has vacated an altitude, he/she may not return to that altitude.”

We’ll hit the details in a second, but the basic meaning is this: there is no ticking clock. ATC has looked downstream and seen nothing of concern.

What if I left off the “pilot’s discretion…,” and told you, plainly, “Descend and maintain 3000”? That’s a standard altitude clearance. Per AIM 4-4-10, “Adherence to Clearance,” you should “initiate climb or descent promptly” at an “optimum rate consistent with the operating characteristics of the aircraft to 1000 feet above or below the assigned altitude, and then attempt to descend or climb at a rate of between 500 and 1,500 fpm until the assigned altitude is reached.”

With such a standard altitude clearance, ATC expects you to quickly vacate your altitude, at a rate suitable for your aircraft. Controllers must, of course, have realistic expectations. Obviously, an Airbus A340’s average vertical speeds are going to be a lot higher than a Cherokee’s. Over the years, we get a feel for how each aircraft performs.

With a pilot’s discretion clearance, you may start your descent or climb at your leisure and use as much or as little vertical speed as you want. Want to finish that messy sandwich you were chomping on before tweaking the trim and power for a descent? Keep chewing. Flying over interesting scenery and don’t want to climb yet? Enjoy the view. Do you want to pull the power and shove the nose over, nudging the airspeed towards VNE? Go for it; it’s up to you.

Beyond convenience, it can also be about comfort. We work plenty of Angel Flight aircraft. They’re a non-profit charity organization that connects willing, instrument-rated pilots with medical patients in need, flying them to needed treatment when they can’t afford the cost of a standard air ambulance. When we see an Angel Flight or air ambulance call sign, we know there’s a sick person aboard. A pilot’s discretion clearance allows them to make their flight as smooth as possible.

No Returning to Previous Altitude

All good so far, right? So where are the caveats? There’s really only one big one, this sentence from the pilot’s discretion definition: “However, once he/she has vacated an altitude, he/she may not return to that altitude.”

Altitude is one of air traffic control’s primary separation tools. IFR aircraft need to typically be spaced vertically by 1000 feet. As limitless as the sky seems, ATC has it all chopped up into radar sectors for traffic-flow purposes. Some sectors may be 10,000 feet or more in height. Others may only be 3000 feet vertical. In the latter, there are therefore only three usable IFR altitudes. Space is precious. We’re constantly stacking and shuffling planes between those layers.

When we clear you to climb or descend at pilot’s discretion, we’re not counting on you to leap off that altitude immediately. However, once we see your altitude start changing, we’re going to consider the altitude you just vacated to be available for another aircraft.

If you do need to return to a previous altitude, you must advise ATC first because you’ve lost your ownership rights to the altitude you just left and someone new might be moving in. ATC needs to re-clear you back to it and—in the process—ensure no other aircraft will share that particular piece of sky.

Paired with the “vacated altitude” restriction is another important part of the pilot’s discretion definition: “He/she may temporarily level off at any intermediate altitude.” This can be helpful if you encounter something unexpected.

Let’s say you’re flying in winter and I gave you a pilot’s discretion climb from 5000 to 9000. As you climb through 7800, you start picking up airframe icing. It’s increasing the higher you go. You’re starting to get a bit nervous.

Per the “level off” part of the pilot’s discretion clearance, you may stop your climb right there before things get worse. However, because of the “vacated altitude” rule, you can’t drop back down to warmer, iceless climates without a new ATC clearance. You’re stuck for the moment, unless you declare an emergency.

As always in ATC-pilot communications, everyone must be on the same page. Try not to make a bad situation worse by reversing vertical direction without letting ATC know. Obviously, emergency situations might not leave you much choice. Just get the controller in the loop as soon as possible so s/he can keep other planes out of your way.

When Pilot’s Discretion is Simply Inferred

There are times where pilot’s discretion is implied and the controller doesn’t have to say it. For instance, crossing clearances, such as “Cross Cypress VOR at 10,000,” or “Cross HAXAM at 2000, cleared approach.” As stated in AIM 4-4-10.e: “If the altitude information of an ATC DESCENT clearance includes a provision to ‘CROSS (fix) AT’ or ‘AT OR ABOVE/BELOW(altitude),’ the manner in which the descent is executed to comply with the crossing altitude is at the pilot’s discretion.”

Can a crossing clearance be coupled with a standard altitude clearance? Sure. If I say, “Cross Cypress VOR at 10,000, then descend and maintain 6000,” you can take your time getting down to 10,000, as long as you’re at it over the VOR. Once across it, though, I need you to make a standard descent to 6000.

Note that these latter examples all contained the word “cross.” If I instead told you, “Proceed direct Cypress VOR. Descend and maintain 10,000,” it’s not a pilot’s discretion descent. I’m expecting you to proceed toward the VOR and promptly begin descent to 10,000.

Standard Terminal Arrivals (STARs) and Standard Instrument Departures (SIDs) also get in the act. These standardized routes funnel aircraft in and out of congested airspace over a specified set of fixes, often with altitude and speed restrictions along the way. Pilots can be cleared to “descend via” a particular STAR or “climb via” a SID.

Both AIM 5-4-1 and 5-2-8 have lots of phraseology examples at the end, detailing various combinations of STARS, SIDS, crossing restrictions, and more. There are also communication requirements in each section. “Pilots cleared for vertical navigation using the phraseology ‘descend/climb via’ must inform ATC upon initial contact with a new frequency, of the altitude leaving, ‘descending via (procedure name),’ the runway transition or landing direction if assigned”—if on a STAR—”and any assigned restrictions not published on the procedure.”

In its many forms, pilot’s discretion is a great tool that helps both pilots and controllers relax a bit when ATC operations aren’t at their highest pressure point.

You know what’s fun about being a tower controller? Getting to see the airplanes. Ever since I was a kid, I loved watching planes come and go. Now, I get paid to do it 40 hours a week. While I enjoy working our usual metal on a daily basis—the airliners, trainers, corporate jets, and air ambulances that form the bulk of our traffic—there’s one category that ups the “fun factor” like no other: military combat aircraft.

Many people only get to see F/A-18s, F-16s, and other high performance hardware at air shows. We get to work them fairly often, and—at least for me—it never gets old. They’ll come in fast, often requesting an overhead break, a combat landing maneuver where they blaze in over the runway, usually at over 300 knots. At a point specified by the controller, they’ll “break” hard left or right, pulling G’s and bleeding off speed as they pop out flaps and landing gear in time to put it down.

Their takeoffs are no less entertaining. Our standard departure altitude for jets is 5000. An F/A-18 rocketing off the runway can top that in no time, so why make him stop there? When a military jet’s ready to depart, we’ll call the radar room and ask for an “unrestricted climb” to a higher altitude.

An unrestricted climb does as its name suggests: it removes all restrictions on how fast the aircraft can climb, like a military-grade pilot’s discretion clearance. If the pilot wants to stand on his tail and shoot for the sun like Icarus, we’re letting him do it, as long as he levels off at the altitude we issue. It’s almost like an unspoken, unwritten expectation between military pilots and ATC. Controllers like to see a show. Aviators tend to want to show off what their ride can do and get up to altitude. The result? Thrills for everybody.

If I’ve got an F/A-18 at the hold short, I’ll coordinate with radar: “Request unrestricted climb to 15,000 for Bandit One One.” The radar controller will eyeball his traffic, make sure he’s got absolutely nobody in his way, and say, “Approved.” Then I’d issue the takeoff clearance. “Bandit One One, maintain one-five thousand. Unrestricted climb approved. Fly runway heading, runway two-seven, cleared for takeoff. Change to departure.”

When an F/A-18 taxies into position, it has an ungainly waddle. Then the afterburners light and it leaves any awkwardness behind. The tower windows rattle in their frames from its sound and power. In moments, the wheels lift off the ground and into the wells, but the nose stays level as it picks up speed at a ridiculous rate. Then, at runway’s end, the pilot yanks the nose high, G forces ripping white water vapor tendrils from the air and sending them streaming over the wings. The fighter bolts straight up, riding the fiery shock diamonds of its exhaust. Within seconds, it’s a quickly disappearing speck in the blue.

Yeah, that never, ever gets old…

Tarrance Kramer, a controller in the Midwest, wishes he could put his feet up and give everybody a pilot’s discretion clearance.