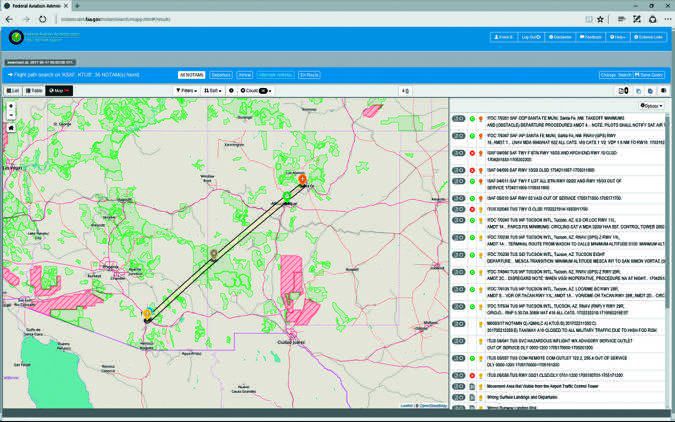 In late 2010, experienced pilot and U.S. senator James Inhofe was issued a pilot violation by the FAA. Displeased with the violation process, he created and sponsored the Pilot’s Bill of Rights 1 and 2.

The NTSB is supposed to be an impartial entity to which a pilot may appeal a certificate suspension or revocation. For decades, aviation attorneys have known this is not reality. They have accused the FAA repeatedly of unfairness in both the investigation and prosecution of such cases. They also contended that the NTSB’s review of an FAA order almost always comes down on the FAA’s side. Years of such decisions are well-known in the aviation community and have rarely favored the pilot. That all changed for the better once the Pilot’s Bill of Rights became law.

A provision of the PBR requires that an NTSB review of an FAA denial must be conducted “to the extent practicable” in conformance with the Federal Rules of Civil Procedure and the Federal Rules of Evidence. This prevented the casual and unfavorable treatment of evidence.

Given the former lax provisions, the quality of evidence used to justify enforcement actions was not very rigorous. The FAA could prove its case via hearsay without a direct witness, plus they didn’t have to prove the reliability of a given document. Now, even though hearsay evidence is still permitted, the party must justify its admissibility under the Federal Rules of Evidence.

Before PBR, the FAA would send a Letter of Investigation or LOI, often after the investigation was underway and blind siding the airman. Worse, these letters gave the incorrect impression that the pilot was required to reply. Many well-meaning pilots trapped themselves with unintentional self-incriminating language that the FAA later used against them.

The PBR now requires the FAA to provide “timely written notification to an individual who is the subject of an FAA investigation relating to the approval, denial, suspension, modification, or revocation of an airman certificate…”

Sen. Inhofe’s request for air traffic data was denied on the basis that an investigation was ongoing. That convenient Catch-22 was eliminated with the PBR provision that directs the FAA to give access to ATC data at the time of the investigation to allow the individual to “productively participate” in responding to the FAA. That gives the pilot one more means of defending him/herself.

Before the new law, LOIs did not contain much if any information that the pilot needed to mount a proper defense. This was just one more way of stacking the deck in the FAA’s favor. No more.

The table shows the information that must now be provided in an LOI. As an exception, the PBR allows the FAA to delay timely notification if it could adversely affect the integrity of the investigation. One might ask if the FAA will invoke this clause as their new Catch-22.

From the day air traffic data is made available to the pilot, a 30-day clock begins during which the FAA may not take certificate action. The FAA must conduct and complete its investigation before a Notice of Proposed Certificate Action can be issued.

When Sen. Inhofe requested the elusive NOTAM from Lockheed-Martin, he used the Freedom of Information Act. His request was denied because they are non-government and not bound by the FOIA. Sen. Inhofe was stuck again.

The PBR states that a person is entitled to any air traffic data from a “government contractor that provides operational services to the Federal Aviation Administration, including control towers and flight service stations.”

Individuals entitled to access or otherwise obtain air-traffic data under the PBR should direct such requests to the FAA investigator who provided them with the written notification of investigation.

Because archived material is perishable, the FAA suggests that any requests be “expeditiously received” by them. Requests should be as detailed as possible to help find, preserve and provide the data to the requestor.

If you receive a letter from the FAA that is adverse in nature, be careful how you answer. You may want to consult an aviation attorney first because these things can snowball out of control if mishandled.

Before the PBR, the NTSB was legally bound by FAA legal interpretations of its laws, regulations, and policies as to punishment that could be imposed in an enforcement case. Before PBR’s passage, NTSB administrative law judges had no discretion in such matters.

Now a judge can decide how much regard to give the FAA. The PBR specifically states the intent to eliminate the “special deference” given the FAA and replace it with the “due deference” generally granted to administrative agencies.

Before the PBR, an appeal of an NTSB decision had to be filed in the U.S. District Court for the District of Columbia, an expensive proposition for anyone who lived elsewhere. Now a pilot can appeal in the federal district court where the pilot resides or where the event happened. The pilot can even skip the district courts and file an appeal from a full NTSB order in a federal court of appeals. This gives the pilot one additional “bite at the apple” and works in his/her favor.

The pilot doesn’t get off any more easily. An emergency suspension or revocation stays in effect unless overruled. The PBR calls for a “full independent review” including a review of the FAA’s decision “to make such order effective immediately.” The review includes proceedings before the FAA and the NTSB.

Even before the Inhofe incident, the FAA’s Aeronautical Information Management Office was working on improvements to the NOTAM system. Much of this work required digitizing a vast number of analog NOTAMs to make them searchable, an essential step before a web search tool could be built.

The PBR demanded enactment by August 2013. An official NOTAM Search web site became active in November 2013 and was updated in October, 2015. It’s at https://notams.aim.faa.gov/notamSearch/nsapp.html (See above.) You might want to specifically note this URL as it’s not currently searchable from Google or from the FAA’s main website. You’ll need to register to gain full-featured access. It’s not a one-stop-shop, though—there is no weather, for instance. By itself you won’t meet the preflight requirements in 91.103.

– Improve the system of providing airmen with pertinent and timely information regarding the National Airspace System.

– Archive, in a public central location, all NOTAMs, including the original content and form of the notices, the original date of publication, and any amendments to such notices with the date of each amendment.

– Apply filters so that pilots can prioritize critical flight safety information from other airspace system information.

– Decrease the overwhelming volume of NOTAMs an airman receives when retrieving airman information prior to a flight in the National Airspace System.

– Make the NOTAMs more specific and relevant to the airman’s route and in a format that is more useable to the airman.

– Provide a full set of NOTAM results in addition to specific information requested by airmen.

– Provide a document that is easily searchable.

– Provide a filtering mechanism similar to that provided by the Department of Defense Notices to Airmen.

The PBR set new goals for medical certificates. The Act requires an appropriate medical application form without being overly broad. The form must be constructed to avoid misinterpretation and mistaken responses. It must allow for consistent treatment and responses during the medical application process with the overall goal being to avoid unnecessary allegations that an individual has intentionally falsified answers.

Questions should elicit information relevant to determining an individual’s medical qualifications within the standards identified in the Administrator’s regulations and give medical standards greater meaning by ensuring the information requested aligns with present-day medical judgment and practices.

The application of such medical standards must provide an appropriate and fair evaluation of an individual’s qualifications. Importantly, the individual should be able to understand the basis for determining medical qualifications.

Caution: pilots who fly on BasicMed are only granted PIC privileges. They are not allowed to act as safety pilots unless they also act as PIC.

Third class medical reform from Pilot’s Bill of Rights 2 is law, but the remaining provisions of PBR2 aren’t—yet. PBR2 expands many protections from PBR1. To start, the protections in PBR1 have been expanded to include all FAA certificate holders, such as mechanics.

The new legislation also permits pilots facing FAA enforcement or certificate action to appeal directly, either to a U.S. district court or to the NTSB for a full hearing. Pilots can choose to have their case heard by an NTSB administrative law judge or in a court of law by a neutral third party that will hold the FAA to strict standards of proof.

PBR2 requires the FAA to provide a specific description of the incident under investigation. This makes it easier for a certificate holder to understand the issue(s) and respond appropriately.

If the FAA fails to provide timely notice that it is beginning an investigation, they are prohibited from any administrative or enforcement action or even retaining any case-related records.

The FAA cannot conduct fishing expeditions. PBR2 allows the FAA to demand only documents from the certificate holder related to the issue(s) specified in its notice of investigation.

The FAA is prohibited from publicizing pending enforcement actions. If no action is taken, PBR2 prohibits the FAA from retaining investigative records longer than 90 days. Once it’s over, it’s over.

Should the FAA take enforcement action or issue an emergency order, they are required to provide the certificate holder with a copy of the releasable portion of the Enforcement Investigative Report (EIR). That seems only fair, but seeming lack of fairness is what caused all the ruckus in the first place.

In another break, FAA lawyers now have more flexibility to resolve cases administratively such as a warning letter or letter of correction.

PBR2 includes provisions to expedite NOTAM system improvements. NOTAMs must be maintained in a public repository that is Internet-accessible, machine readable, and searchable. TFRs must be included. Further, the FAA must create a rating system that prioritizes NOTAMs by timeliness and importance. Here’s the stick: If the FAA doesn’t meet the legislation’s timeline for making the updates or if a NOTAM is not included in the repository, the FAA won’t be permitted to take enforcement action based on a NOTAM violation.

PBR2 goes further than PBR1 to make contract towers, flight service stations and other FAA contractors subject to the Freedom of Information Act with respect to flight data records.

A new addition protects aviation medical and pilot examiners, airworthiness representatives and other FAA designees from civil liability for designees who act with reasonable care in the performance of their FAA-designated duties.

Civil liability immunity is afforded for pilots who fly for public benefit such as providing volunteer services in an emergency or who fly for humanitarian, charitable purposes for nonprofit organizations.

Overall, PBR seems to be working. Let’s all pray that the years of using some pilots as piatas are over.

Fred Simonds, CFII is not a lawyer, nor even a jailhouse lawyer. This article is informational. Seek professional advice as your circumstances dictate.