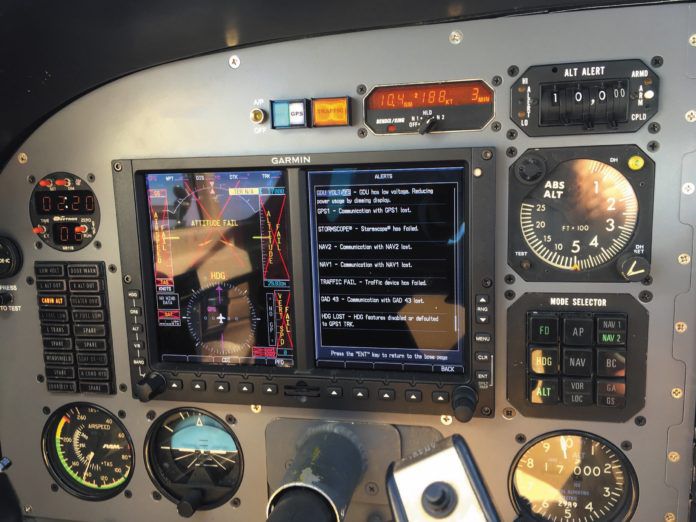 You’ve heard the old axiom about gear-up landings: There are those who have, those who will, and those who will again. No, I haven’t (well, haven’t yet) landed gear up. But, I’m thinking that same rule applies to gyro failures and EFIS failures.

When I undertook a panel refit on my bird some years ago, I equipped for the maximum utility for me to fly behind this panel. Garmin’s G500 was new and the Aspen hadn’t been around very long either. Each was attractive, so, unable to decide, I picked both.

I installed a G500 on the left-side flight panel. Wanting some real redundancy—not just backup—the limited space on the right panel was perfect for Aspen’s PFD. This way, if my G500 ever croaked, I’d just hop over to the right seat and fly using the Aspen. That also had the advantage of giving any planned right-seater good PFD information should that ever be necessary. I was set.

Or so I thought until about a month ago when, on the first of two legs to a shop for this year’s annual, my G500 stopped talking to … everything. I was on top in VMC, so it wasn’t a big deal. My destination, however, was reporting solid IMC. “No problem,” I thought to myself. “I’ve got the Aspen.”

Without the autopilot (failed attitude from the G500) I hand flew from the left seat for a bit. That proved awkward, so I swapped seats and continued the flight to my planned destination.

Anticipating an approach, I started fiddling with the various nav inputs and setups on the Aspen. I’ll confess that in years of flying behind this configuration, although I’d studied the Aspen’s buttonology, I’d never flown it from the right seat. That was a mistake. I quickly realized I wasn’t competent to fly an approach with the Aspen in my airplane.

As it turns out, there was a VMC airport close to my destination. I landed there uneventfully and the outcome was 1) paying $200 more for fuel than planned, and 2) experience—as in experience is what you get when you don’t get what you wanted to get.

After refueling, l did a little unsuccessful troubleshooting before continuing VMC to the airport for the annual. As I write this, the plane is still there and I’m considering what path to follow to get things fixed, since there’s no avionics shop at that airport.

Meanwhile, I’m still rehashing my experience behind the Aspen. The lesson learned is that I’ve got to spend some time flying approaches from the right seat using the Aspen. That’s obvious.