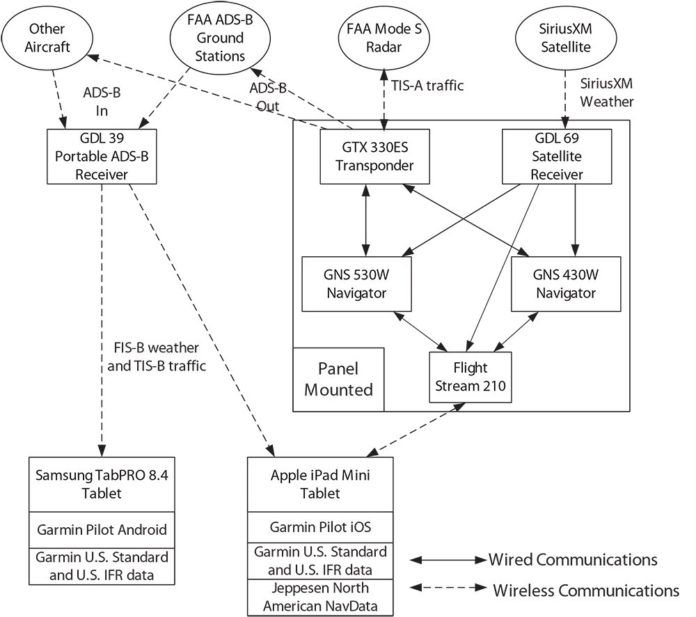 Like many active pilots, I’ve enthusiastically embraced the transition to digital technology in the cockpit. The panel in our V35B Bonanza is well equipped for instrument flight, with Garmin navigators and an Aspen Evolution EFD1000 Pro primary flight display. But, I also wanted to add ADS-B traffic and weather information, and a way to carry instrument charts electronically without compromising safety.

I now carry two tablets. (No, I don’t wear suspenders with my belt, but I’ve thought about it.) Both have Garmin Pilot and all the current instrument charts I need. One tablet connects to the navigators through a Flight Stream 210, and both use a Garmin GDL 39 ADS-B receiver to get traffic, weather and flight information.

I’ll describe how I decided to add ADS-B and Flight Stream, some of the surprises I encountered getting it working, and how it has changed my preflight preparation and in-flight procedures. I’ll also explain why I like carrying two tablets.

Digital Technology in the Panel

Digital technology has been a focus throughout my adult life, so I was delighted when serious devices allowed our cockpits to finally join the revolution. I installed a Garmin GNS 430 soon after Garmin released it, and added a GNS 530 when that became available. It wasn’t long before the panel was “completed” with a GDL 69 SiriusXM satellite weather receiver and a GTX 330 transponder receiving TIS traffic. As soon as possible, the GNSes were upgraded to WAAS and I was flying LPV approaches when they were new. That panel worked quite well for primary navigation and traffic and weather avoidance.

Instrument charts were still a problem. I hated updating and lugging Jeppesen paper charts. (Who doesn’t?) I avidly read articles in IFR about electronic flight bags, and tried several approaches for electronic charts. None was satisfactory and I always reverted to paper charts.

ADS-B really got my attention. I asked my local avionics dealer, Phil Tomlinson at Tomlinson Avionics, about adopting ADS-B. Phil suggested I upgrade the GTX 330 to provide ADS-B Out.

For ADS-B In and chart display, he suggested a GDL 39 portable ADS-B receiver feeding an iPad running Garmin Pilot. He pointed out that it would cost a lot less than replacing the 530W/430W, and “Garmin will keep updating the software on the iPad” compared to infrequent feature upgrades to the panel-mount avionics. I bought a GDL 39, he gave me a trial copy of Garmin Pilot, and I picked up an iPad Mini on the way home.

I flew a long trip a few weeks later and enjoyed using Garmin Pilot. The added situational awareness from the overlaid FIS-B weather and TIS-B traffic on the iPad display was great. Completing the transition, Phil had my GTX 330 upgraded to a 330 ES and I went all-in with a Garmin Pilot US IFR subscription.

Phil was right. Over the next year and a half, Garmin Pilot got many upgrades, each making it even better. Plus, the electronic charts were easy to use and simple to keep up to date.

But I wasn’t yet ready to abandon paper charts. Having all my charts in electronic form on one device made me nervous, so updating and lugging paper continued. While flying, I went back and forth between the Jeppesen chart formats and the FAA’s AeroNav charts, which Garmin Pilot uses under the name FliteCharts.

My new procedure also needed two versions of each flight plan—one on the iPad and one on the panel navigators. They weren’t necessarily the same, so I had to manually keep them synchronized. My frequent flights through Class B airspace, with its common reroutes, could present a challenge.

A year ago, I flew from Norfolk to Bedford, MA (KBED), and filed the preferred route through the New York Class B. As I approached the JFK waypoint, TRACON changed the rest of my route to Bedford. Of course, the panel was primary, so that’s where I made the change. I’d come to rely on the iPad for enhanced situational awareness (SA), but the iPad then had the wrong route and my situational awareness suffered a bit. Focusing on flying the airplane through the busy and complex NY airspace, I was half way to Bedford before I updated the iPad.

Garmin addressed this problem with Flight Stream. Continuing my early adopter status—or perhaps proud of it—late last spring I went back to Phil and we installed the Flight Stream 210. It offers Garmin Pilot on the iPad wireless two-way flight-plan transfer, SiriusXM weather transfer from the GDL 69, and a backup AHRS. That’s when the fun started.

Garmin Pilot’s Connext page manages communications between the tablet and external devices such as the GDL 39 and Flight Stream—and through Flight Stream to the panel avionics. So, after the installation, I brought everything on line and connected to Flight Stream. I got my first surprise—the 530W and 430W didn’t show under “Situational Data.” It turned out that the GNSes needed updated firmware to work with Flight Stream. Do that; try again.

I tried transferring flight plans from the iPad to the 530W—after all, that was my primary objective. The Connext page now showed the 530W and 430W, and Flight Plan Transfer worked fine for some routes. But other routes I’ve flown dozens of times wouldn’t transfer; the 530W kept rejecting them, claiming invalid waypoint names. I checked the waypoint names on the charts, and they were correct on the iPad.

Garmin’s website had nothing about the mysterious error, so I called. When I said this was new to me, the aviation support tech said, “It’s new to us, too.” After a long delay, he said he’d been told there were inconsistent internal waypoint names between the AeroNav data in Garmin Pilot and the Jeppesen data in Garmin’s panel displays. To fix it, I needed to update Garmin Pilot with an annual subscription to Jeppesen North America NavData. Oh, really? However, that $100-a-year surprise did, indeed, fix the problem.

Next, I tried to get weather from my GDL 69 on-board receiver to the iPad. But the Connext page couldn’t find the GDL 69. Phil found that my GDL 69 had to go back to Garmin for a hardware update to work with Flight Stream—another $650 surprise.

At that point I realized I also had a Samsung TabPRO 8.4 tablet, which I had bought to run some Android applications that don’t run on iOS devices. Phil said my Garmin Pilot subscription could be used simultaneously on two devices. I installed Garmin Pilot on the TabPRO and ran into some problems activating my subscription, which were resolved by yet another call to Garmin support. Once it was working, I downloaded all the same charts I had on the iPad, and coupled the TabPRO to the GDL 39.

The combination of Garmin Pilot and Flight Stream has substantially changed my flight preparation and cockpit procedures. Before Flight Stream, I flew with Pilot for a year and a half, so I’d already gotten into the habit of using its Flight Plan page, and using its Trip Planning page for weather briefing and flight plan filing. I’d also gotten used to receiving confirmation of the filed flight plan (or proposed changes) on the iPad before driving to the airport.

Before Flight Stream, I would set up the trip routing in the 530W. I’d then wait until I was near cruising altitude before launching Garmin Pilot on the iPad. With Flight Stream, I start the iPad when I turn on the avionics master. As soon as the navigation system is ready, I select “Flight Plan Transfer” on the Connext page, look for the ACTIVE FLIGHT PLAN block, and tap “Send.”

MSG immediately appears on the 530W; when I press the MSG button I see “Connext FPL pending check FPL import page.” Pressing the FPL button I see the CONNEXT FPL IMPORT page showing PENDING FLIGHT PLANS with the from/to waypoints of the iPad flight plan. I select the flight plan and press ENT. The FLIGHT PLAN PREVIEW PAGE then shows the flight plan. I select ACTIVATE (the default), and when I press ENT I see the ACTIVE FLIGHT PLAN page with the plan from the iPad. (It takes only a few seconds after you do it a few times.) So before I’m ready to taxi, I have the identical flight plan in the iPad and the 530W/430W.

I configured “Flight Plan Transfer” to “Receive Updates from GNS 530W.” Whenever there’s a waypoint change, I enter it in the 530W just as I’ve always done. Every change I make in the 530W appears within seconds on the iPad, so the panel and Garmin Pilot displays stay synchronized automatically.

I really like the SiriusXM weather display on the iPad. The iPad display has much higher resolution than the 530W, and I can scroll and zoom to look at the weather ahead of me. That’s hard on the 530W, but instinctive on the iPad.

Since the TabPRO has a larger and brighter display than the iPad, I usually display approach charts on it while using the iPad for route guidance. The latest version of Garmin Pilot allows me to connect the iPad to both Flight Stream and the GDL 39, so I have TIS-B traffic on both tablets. I’m pretty sure I can also now connect both tablets to Flight Stream, giving me full redundancy.

I’ve abandoned paper charts; with two complete sets of up-to-date charts, if one tablet fails in flight I still have the other. Also, after I got comfortable with the AeroNav chart format, I’ve been able to standardize on that.

Phil gave me good advice when he suggested an iPad instead of upgrading the panel. I’ve spent a lot less money and have terrific capabilities and redundancy. Even with the hurdles I had to overcome along the way, and even with the few that remain (see sidebar), I’m quite pleased with my current panel and the tablets are easier and quicker to use than most panel-mount avionics. Oh, anybody want to buy a used flight case?

Dave Waks is based in southwest Florida. He has worked with digital technologies and flown airplanes for more years than he cares to admit.