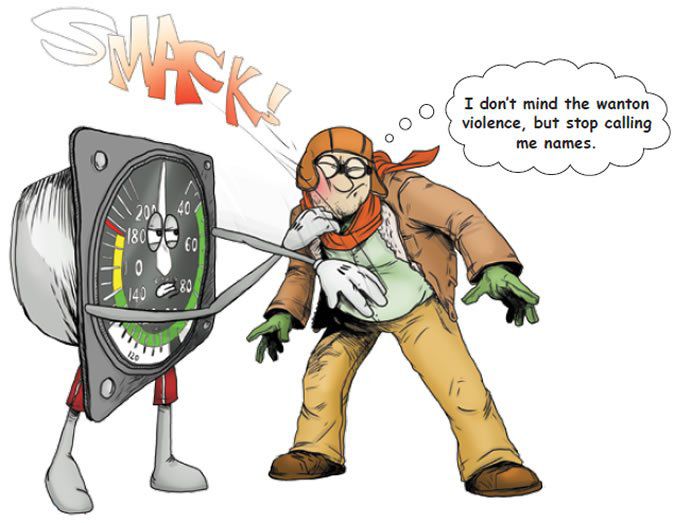 You’re Right, That Was Too Far

I thoroughly enjoy your IFR magazine and eagerly look for it every month. I do have a concern about the front-page caption, “Bitch-slapped by physics,” found on the cover of the October 2010 issue.

Come on, Jeff. All of you at IFR magazine are excellent writers who know how to get the information out in a comprehensible form and fashion that is entertaining and useful. Using that description for your article about V-speeds is inappropriate.

Before you or any of your readers cry out, “Oh no, another PC is complaining,” let me explain. I have been flying since 1973 and have my instrument and commercial ratings. I am an advanced ground instructor and I own a 1974 V35B Bonanza. I am an Assistant Principal at the local high school and teach ROP Intro to Aerospace (basically a ground instruction course for Private Pilots) to high school students grades 9 through 12.

I use IFR magazine on many occasions for my students to keep them up to speed on the latest information about the IFR world as well as the invaluable weather information that you supply.

Jeff, that comment would result in having you sent to my office, at which time I would suspend you for being inappropriate with your written language. Our kids are constantly being barraged by degrading and inappropriate material from all types of media. IFR should not be one of them.

You and your staff have a greater understanding and use of English vocabulary than to utilize that cheap newspaper tactic.

Like all of us, we do make mistakes while trying to make a point, so, I am amending your suspension to detention so that you can thoroughly think through your intentions before you place them into print.

Jeff Van West replies: You’re right. That was a step too far. While we may pride ourselves on pushing the bounds of “appropriate,” that’s supposed to be in context of aviation only. It should never be offensive.

I’ll accept the blame and make a point to draw my language more from the Merriam Webster’s and less from UrbanDictionary.com.

Is “dope-slap” found anywhere in the OED?

I appreciated your article “Skip the IAF on an Arc” in the September 2010 issue. I have always wondered about intercepting an arc inside the IAF fix and your article clearly answers this question.

Frank Bowlin responds: Anybody got a sword I can fall on?

One of my company’s senior check airmen published an internal article quoting a source at the FAA saying we no longer needed to overfly a named IAF on a DME arc in non-radar. I checked a bit further and, indeed, that’s what our source at the FAA was telling us. So, I wrote the article for IFR, hoping to scoop the competition. When questions starting coming in, I sought the official documentation that I assumed would be available by then.

The original FAA source is now retired and nobody in his office seems to know anything about this “new” interpretation. So, I contacted a number of folks at the FAA who have some authority over things like this. Unfortunately, all I got in a number of phone calls was, “Ahhh…what?” and a referral to yet another person who knew nothing about it.

Although something more may come from all this, for now we’re forced to conclude that our original contact was at best involved in some pre-retirement wishful thinking. So, until we’re able to point you to an official, publishable ruling posted on the FAA’s own web site, in non-radar environments you should continue to begin DME-arc approaches from an explicitly named IAF.

Moral of the story: The left hand and right hand at the FAA are as disconnected as ever. I should have remembered this.

This one has everybody I’ve talked to stumped. At Tri-County Regional in Lone Rock, Wisc., the takeoff minimums are, “Rwys 9, 27: 600-1, or 1000-2 for climb in visual conditions. Rwys 18, 36, NA-Environmental.” The obstacle departure procedure reads, “Rwys 9, 27, for climb in visual conditions: Cross Tri-County Rgnl Airport at or above 1600 before proceeding on course.”

Ceilings and visibility of 1000-2 are almost VFR. So what does “for climb in visual conditions: Cross Tri-County Rgnl Airport at or above 1600 before proceeding on course” mean? Am I supposed to circle over the airport to 1600 feet? Are they redefining “visual conditions” as 1000-2?

I enjoy IFR, and thanks for your help.

It is confusing. The visual climb is (usually) published when the required climb gradient is greater than 500 feet per mile. But whatever is demanding that climb isn’t that tall. If you have 600-foot ceilings and 1-mile visibility, you can see the obstacle and avoid it. Above 600 feet and already traveling on those headings you can climb at 200 feet per mile and turn on course in any direction.

You also have the option of circling over the airport to climb to 1600 and then proceeding on course. But because of other obstacles, that requires 1000-2. Presumably these obstacles have something to do with why Runway 18-36 is not an option. An altitude of 1600 feet MSL equates to 900 feet AGL at this airport, which is the source of the 1000-foot ceiling requirement, also AGL.

The practical fallout is that you’ll want 600-foot ceilings and depart 9 or 27 unless you have a heck of a climb rate. The visual option doesn’t offer you much more than the regular ODP does.

Now that the colder weather is approaching, I have a question about the article on the effects of cold air on altimeters in the November 2009 IFR.

I don’t understand why the correction table (AIM 7-2-3) gives the values it does. I would expect that the temperature error, like barometric pressure correction, would be a fixed offset that is a function of temperature due to the increase in density. While I suppose it might vary with pressure or density altitude, I don’t understand why it would vary so strongly with “height above airport” as in the table (or formula). In other words, it’s the same correction at a sea level airport as a 5000-foot airport. My first thought was that it could be due to variability in the lapse rate, which can vary by 2:1, but the table is way stronger than that.

My next thought was that it had something to do with density altitude for which a small temperature delta can make a large effect. But the effect didn’t vary much in the few problems I ran.

We don’t know the formula behind the table, but believe the greatly widening correction has to do with compensating for the potential error between the ground-level altimeter report you’re using and the real pressure at your actual altitude.

Do we deserve a sit-down talk (again)? Or do you just have some spleen that needs venting?