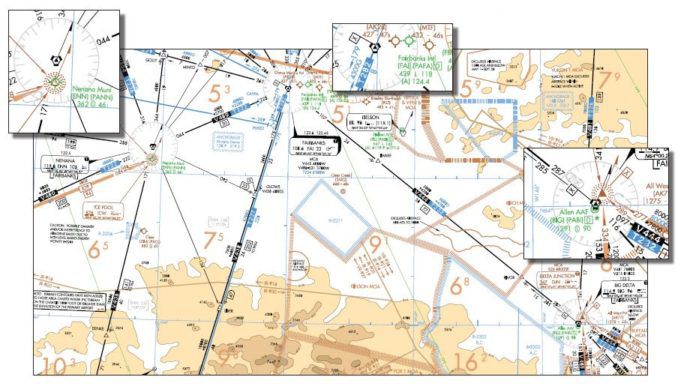 Several months back reader Jim Gibertoni in Alaska forwarded me a letter he wrote to the FAA administrator, Randy Babbit. Here’s a line from that letter: “My question is simple: How does one FAA Part 91 pilot in Fairbanks, Alaska, get the attention of the FAA before the next crash happens in Fairbanks?”

According to Gibertoni, Fairbanks has one viable alternate for many aircraft. That’s Nenana airport, about 30 miles southwest. Everything else is simply out of range without carrying so much extra fuel as to be impractical or impossible. On the summer day in question, a TFR for fire fighting popped up and cut off Nenana, effectively leaving Fairbanks with no viable alternate for IFR traffic.

This was a problem because the same fires had rendered Fairbanks IFR—low enough that airline service was missing the approach. From Gibertoni’s letter: “At one time, I counted 11 airplanes on the Approach Control frequency … Controllers were requesting fuel loads from every plane … All 11 planes were sent away to other airfields hundreds of miles away, which were also under IMC, some with no towers and no crash rescue.”

His point, however, was that this was not that uncommon an event because when Fairbanks went below minimums, Nenana often did as well. He offered a solution to this issue, which was for the FAA to press the Army to allow landings at Allen AAF, only 70 miles southeast. The good part about Allen is that it often has different weather than Fairbanks. The airport is staffed part time, has big runways and ground personnel. The catch is it also has missiles.

Actually, it has missiles, three controlled firing ranges, seven drop zones and one associated restricted area, all of which was pointed out in the FAA’s response to this proposal. Note that the air base itself is not in restricted airspace or under an MOA. It’s actually right on a Victor/Tango airway. The FAA’s letter also said that the base would accept a legitimate emergency—including running low on fuel—but that “Allen Army Airfield (AAF) cannot be used as an alternate airfield for civilian aviation.”

That’s pretty cut and dry, but it made us wonder where the basis is in regulation. It doesn’t look like there is any, not directly anyway. The prohibition against landing at Allen is published in the

A/FD, saying that five days prior permission is required. We have to assume that permission would be denied unless you had a really good reason. It doesn’t sound like needing a better alternate counts.

Approaches are published for Allen, with the alert symbol you’d expect, saying there’s something non-standard about using it as an alternate. But it turns out the only thing non-standard is that you can’t use the ILS or LOC/DME Rwy 10 in your planning when the Tower is closed. That’s it.

We’re told pilots shoot approaches at Allen all the time—there’s no prohibition against that—and then break off to other airports, scud running under the clouds. In fact, it was a similar IMC day when Gibertoni had done just that in his 206. He was trying to get into a nearby gravel strip and land when he found himself thinking, “I got to be the biggest horse’s ass, trying to get into this little strip while a quarter mile away there’s a guy in the Tower trying to stay awake.”

If MPs are going to surround you if you land, you can’t go there. But the question remains: Can you file an airport as an alternate if you can’t land? The issue is semantic unless you end up catching the attention of the FAA due to a declared emergency or incident. In the case of Allen, we’d have to say no, based on the letter from the FAA specifically forbidding it. If this situation exists elsewhere, we think it’s probably technically legal but practically not useful or worth the attention it might get you.

Crazy as it sounds, the better plan is probably to file the alternate you expect will be below minimums (so long as there’s not a TFR before takeoff) and then—if you have to—declare the fuel emergency to get into the airport where you can actually break out, and even land at if you have no other options.

And while many of us will never fly over the great expanses of Alaska, it brings home the point that picking an alternate is more than a paper chase. There may come a day when you actually must use it, so you might want to make sure that’s something you really want to—and can—do.