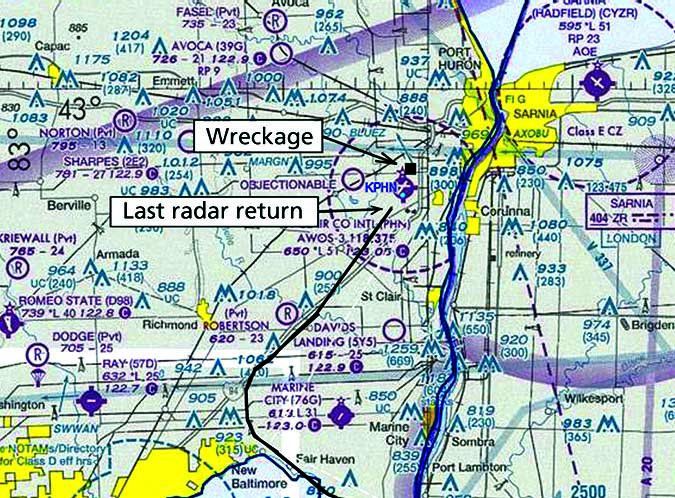 In the August issue of IFR, we reviewed some accidents by experienced IFR-rated pilots looking for some traps and mistakes to avoid. Now that winter flying is upon us, we’ll focus on some of this season’s hazards.

On Christmas Eve 2014 shortly after 12:30 pm, a PA-34 crashed while attempting to land at Port Huron Airport. The pilot was a 52-year old Ontario man with 240 hours of single-engine time and 387 hours of multi-engine time, including instruction. The plane was operating under an IFR flight plan, inbound from Richmond, Virginia, and the pilot, the sole occupant, died in the crash.

The pilot had postponed the trip a day due to forecast low IMC. When he called the next morning, he was informed about a 300-foot overcast ceiling with three-mile visibility at neighboring Selfridge Air National Guard Base. He chose to depart that evening anyway.

Toward the end of the 2.5-hour flight the pilot, according to controller tapes, had dialed in the destination AWOS and received the visibility and ceiling as “1/2SM FG OVC002,” a bit worse than what was forecast.

What’s unusual about this case is the plane didn’t crash short of the runway, but impacted a wooded area about 0.4 miles north-northwest of the Runway 4 departure end (see illustration).

Investigators also found that there was an absence of radar returns for the aircraft as it moved over the airfield, suggesting that it was below radar, which is only 500 feet AGL here. The wreckage imprint on the trees suggested a shallow descent angle. This suggested the pilot was hunting close to the ground trying to acquire the runway visually. Unfortunately, he was already past the airport.

A witness near the crash site who was also a pilot estimated that the visibility was actually less than 1/4 mile. He said, “I have done this approach many times. After hearing this plane approach, I was concerned and thought to myself, ‘This plane is not going to be able to get into the airport due to the dense fog.'”

This crash reminds us of the limitations of ASOS. Without human augmentation, they only measure visibility using a sample volume the size of a refrigerator, and the sensors only look to the zenith to detect ceiling. It cannot do a “deep scan” of visibility and ceiling surrounding the airfield.

So in this case it’s entirely possible the ASOS broadcast painted a slightly optimistic situation. That combined with already running a day behind, arriving after dark, and probable fatigue may have tempted him to dip below DA or linger just a bit longer before commencing the missed approach.

The flights that tempt us most to take chances are the ones where we need our best vigilance, and a willingness to use the alternates.

On an overcast April morning in Ohio, a single-engine Piper PA-32 departed Akron, Ohio destined for Spartanburg, South Carolina at 12,000 feet. There was no record of a weather briefing. The pilot had accumulated 1024 hours of flight time, 200 of them in the past year. His wife was also on board.

The aircraft punched out of thick, low stratocumulus and was in an area of VMC on top. However, after crossing the Ohio River into West Virginia, the pilot saw a dark area of precipitation looming ahead, and began entering layers of altostratus and nimbostratus clouds.

Seeing a small aircraft heading for this region, the controller advised the pilot of an area of moderate to extreme precipitation ahead. The pilot said “I see it here on this radar, too.” This led to the assumption that the pilot had airborne radar, but the plane only carried a tablet device and an ADS-B receiver. The pilot requested and was granted permission to deviate 30 degrees left, but there was no acknowledgement.

About 10 minutes later, the pilot unexpectedly went off-course and entered a gradual left turn to the northeast. This coincided with the plane’s entry into a cluster of moderate to heavy precipitation.

The aircraft rose to 12,600 feet and descended to 9700 feet. As the aircraft entered a series of turns and loops, ATC’s calls to the pilot were met with only brief replies such as “just a lot of weather here, I’m working it.” The plane flew southwest and back into the precipitation, appearing to rejoin the original route. ATC advised the pilot that he was about to enter an area of heavy precipitation. The response was unintelligible. No further contact was received from the plane.

Reconstruction of radar data showed the aircraft entered the bulk of the heavy precipitation. It began a gradual turn to the left, where it disappeared.

Analysis of the radar frames and the radar track showed that the airplane flew directly through cells reaching 57.5 dBZ (VIP Level 6). Observed radiosonde launches showed that the freezing level was at 8000 feet, and METAR observations from Charleston showed an overcast layer based at 9500 feet, placing the plane in the bulk of a clear icing layer.

A likely conclusion is that the airplane navigated erratically as the pilot attempted to avoid the precipitation while working with old radar data and trying to devise a plan for penetrating the area. Once in it, the pilot struggled with a massive icing buildup.

Remember that strong winds aloft degrade the accuracy of tablet-based radar data. There was an 80-knot jet stream over the area of the accident, so mid-level winds across the Appalachians were strong. The cells were moving at over 40 knots, resulting in rapid changes from frame to frame in the datalink weather. The pilot was flying perpendicular to the flight-level winds, which also increased the chance of error.

Much of the activity was almost directly over the Charleston WSR-88D NEXRAD, which cannot tilt higher than 19.5 degrees. Within about 10-20 miles of a radar site, there are large “data gaps” between elevation slices, and a large cone of atmosphere above the radar goes completely unsampled. This may give the impression of gaps between cells over the radar site that don’t really exist.

With the inherent delays in the feed and the fact that cells can move 10 to 15 miles during this interval while building or dissipating, diverting is the better solution. Not far away, Charleston was reporting 15 degrees C, indicating a deep layer of warm air along the route available to the pilot with a simple descent.

Around lunchtime on a cold February day, the pilot of a Rockwell Turbo Commander 690 (twin turboprop) took off from Great Bend, Kansas and headed east for Nashville at FL230 with four people aboard. The 62-year-old pilot had amassed 3200 hours of flight experience, 1400 of it in multi-engine planes, and had attended recurrent training about seven months before.

The flight and the descent into the Nashville area were uneventful until the pilot canceled his GPS (RNAV) approach clearance 10 miles short of the airfield, stating, “I’d like to climb and review the approach, and do it again.”

On the second attempt, the pilot successfully reached the airfield but chose to declare a missed approach. He flew the runway heading and then made a left turn to the southwest.

Eleven minutes after declaring the missed approach, the pilot requested and received a clearance for a third approach. A few minutes later the controller advised the pilot that radar services were terminated and to report cancellation in the air or on the ground. There was no reply. The post-crash fire spread for 80 yards beside a YMCA and across a field.

The aircraft was equipped with anti-ice systems, including wing and empennage deice boots and a propeller deice system. Investigators were unable to determine whether they were activated. Analysis of the wreckage showed that the right engine was operating normally, but the left one was windmilling. Investigators couldn’t agree on why, however.

Radiosonde data from Nashville International Airport an hour after the crash showed that cloud tops in the area were near 4000 feet, with temperatures in the cloud ranging from -2 to -6 degrees C. This is well within the regime for supercooled water and clear ice. The airplane spent 31 minutes maneuvering in these sub-freezing clouds.

Interestingly, sensitive high-resolution NEXRAD radar showed a complete absence of precipitation and there was no SIGMET in effect for icing. However, there were seven PIREPs which reported light to moderate mixed icing between 2000 and 3500 feet in the Nashville area.

Bank angle plus ice accretion would have given the airplane a higher stall speed. The airplane was calculated to have entered a 25-degree bank to join the approach, and radar tracks did show that the pilot had allowed airspeed to decay below 108 knots. Compound that with an inoperative left engine and loss of control is more than likely.

Even capable aircraft with certified de-icing systems can fall victim to ice if enough accretes over time. Throw in something significant and unexpected, such as an engine shutdown, and the situation can unravel in a heartbeat.

Perhaps that’s a way to sum up the lesson for all of these flights: operating in the weather puts us at a disadvantage from the start. Add one more thing—fatigue, equipment limitations, or system failures—and you’d best have an exit strategy ready and waiting.

Meteorological analysis of other aviation weather events can be found on Tim’s webpage.