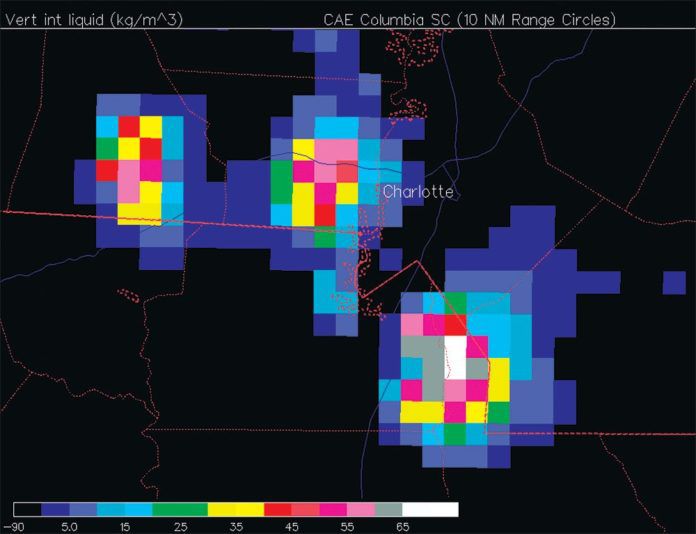 One problem with trying to expand your weather savvy is understanding what additional information is useful and what isn’t. Here’s our take on a current hot item: VIL.

Unless you are a weather geek, you probably have never heard of vertically integrated liquid (VIL). VIL is one of dozens of products generated by the same NWS radars that give us composite- and base-reflectivity images we’ve all come to know and love. Taking a peek at VIL won’t revolutionize your use of NEXRAD, but it could warn you which cells are most likely to kick your butt.

VIL, on the other hand, is an estimate of the total water content above a particular location. Basically, it takes the reflectivity values from the radar echo at all altitudes it can see, and coverts them into a liquid-water equivalent using an empirically derived relationship that assumes that all reflectivity returns are from liquid water (which they are not). Simply put, you can think of VIL as the reflectivity summed with height.

Run for Cover?
There are no magic numbers for VIL. How you interpret VIL ultimately depends on several factors, which include location and time of year. Most of the time VIL is quite boring; don’t expect to see any depicted when non-convective light rain or snow is falling. This product doesn’t get interesting until the reflectivity values start to top about 35 dBZ or so—that’s typically the threshold where yellow starts to show up on most NEXRAD radar displays.

From a convective-turbulence point of view, my personal rule of thumb is to avoid penetrating any area or line of precipitation that shows even a minimal amount of VIL. That might be somewhat conservative, but I don’t tolerate turbulence well in a small aircraft. That doesn’t imply that VIL equals turbulence, of course. But, the higher the VIL, the more likely you’ll spill your coffee.

VIL is primarily used by forecasters because it is a good indicator of both small and large hail. Hail, especially wet-coated hail, reflects more energy back to the radar than anything else that falls from the sky. As a result, reflectivity values can reach 60 dBZ or greater. High reflectivity values alone can be indicative of heavy rain or hail. But when you convert the high reflectivity values hail generates to liquid water content over all elevations in a hail shaft, the VIL (in kilograms per cubic meter) is huge.

Cells with high VIL should get your immediate attention; they are likely the most important ones to avoid, given the limitations mentioned later. They not only are indicative of hail, but often indicate cells that can contain strong updrafts. Certainly give these storms a 20-mile or greater berth, especially downwind of the cell to avoid getting pelted by hailstones.

In a place like Oklahoma in September, for example, a VIL of 55 kg/m3 or greater would typically signify a storm producing hailstones greater than three-quarters of an inch. When VIL exceeds 70 kg/m3, run for cover; this is likely a hail shaft producing hailstones easily exceeding one to two inches in diameter.

VIL Sources
For now, you won’t see VIL as part of any satellite weather broadcast, in part due to bandwidth limitations.

But you can get it on the ground before flight. If you have a subscription to WSI Pilotbrief Optima, the high definition (HD) VIL can be layered over a NEXRAD display. There are also a handful of websites that offer VIL for free. I use the NWS RIDGE2 radar display (http://www.srh.noaa.gov/ridge2/ridgenew2/). Finding the VIL is tricky. Click on the button that says, “Select New Radar” at the top. You’ll see a bunch of icons for radar locations (the red ones are the NWS WSR-88D NEXRAD Doppler radars and the yellow ones are the Terminal Doppler Weather Radars). Picking on one of these icons will display a menu where you’ll find and select “Vertically Integrated Liquid” as an option.

Limitations
There’s always a catch. VIL is often underestimated when the storm is moving quickly over the ground. During a six-minute volume-coverage pattern consisting of multiple elevation scans, a storm moving 40 miles per hour will cover four miles. That means the hail shaft has also moved and the total reflectivity calculated as a liquid equivalent over a single spot will be skewed; the hail’s signature will appear spread over a larger area than it was at one moment in time.

This can also occur with storms that have a significant tilt to them regardless of their speed over the ground. A tilted storm spreads its footprint across the ground over multiple elevation angles, thinning it out quite a bit. So the VIL in these storms may not be representative of the storm’s real strength.

High VIL, Heavy H2O
April of last year I got to see VIL in action. Thankfully, I wasn’t flying. I noticed that a tornado watch was issued for my area just south of Charlotte, N.C. This also included a moderate risk for two-inch-plus-diameter hail. Several supercell thunderstorms developed to my northwest later in the afternoon, all lined up in a row and headed my way.

I went online to take a peek at the VIL and quickly discovered three large cells showing a classic hail shaft with maximum VIL values that were approaching 70 kg/m3. These storms weren’t moving all that fast, but looking at the radar loop it became obvious that I was in the immediate path of southernmost cell.

I quickly pulled the car into the garage, brought in my two dogs, turned my glass-top outdoor table on its side and hoped that it would pass to my west. It didn’t. The southernmost cell moved right through my neighborhood, pelting us with quarter-sized hail that turned into two or three-inch diameter hailstones a few minutes later. Just about every house in my neighborhood sustained some damage, including the shingles on my own roof.

Scott Dennstaedt is just glad it was shingles rather than wings to negotiate with insurance.