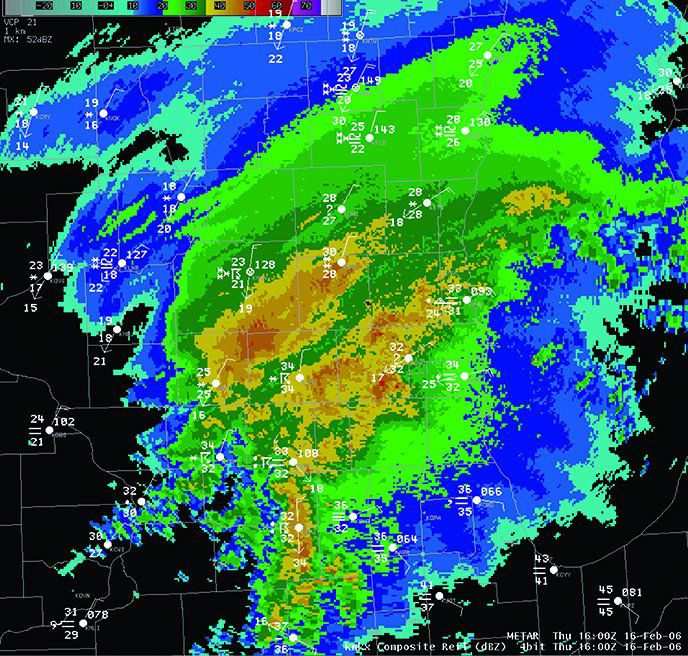 Every now and then someone asks, “What’s your favorite airplane?” Before one stormy January evening, that was a tough call for someone with 47 years and 12,000 hours of flying. After that evening, one particular turboprop twin always takes first prize.

We (myself and a copilot) had flown a passenger from Columbus, Ohio, to Detroit, planning to return a couple of hours later. It was IMC all the way on the northbound leg, and during the approach to Detroit we encountered heavy snow. The temperature was well below freezing, and none of the snow adhered to the cold-soaked airframe.

Our passenger showed up on time (a rare occurrence in the charter business) and we were on the way home shortly thereafter. Detroit to Columbus is at most a 30-minute trip, so we climbed to 15,000 feet for the best mix of weather consideration, passenger comfort and airplane efficiency.

I had started the descent when the cockpit filled with a blinding flash and the loudest sound I have ever heard in an airplane. I don’t use the term “blinding” lightly: My vision was completely obscured for perhaps 10 seconds by what I can best characterize as a bright yellow florescence, then a dark spot appeared in the center and grew slowly until my normal sight returned. There was no bump, no turbulence, no indication that we had hit something—something must have hit us. Lightning? Lightning doesn’t strike in clear air in the middle of winter over central Ohio, does it?

I thought first of the engines, but both were humming along as advertised. A quick scan outside showed no structural damage and there was no vibration or abnormal flight characteristics. The autopilot was still engaged and was holding the airplane steady in the descent I had set up a few minutes earlier. A scan of the flight instruments and the electrical system showed no indications of trouble. I disengaged the autopilot momentarily and checked the flight controls: No problems there, nor blown lights, popped circuit breakers or injuries to any of us. (I looked back to see if our passenger was OK; he gave me a thumbs-up, although I’m sure he was more than a little concerned.)

We were 10 minutes from landing and the airplane appeared to be working normally, so I decided to continue the descent for home. The Tower had closed for the night, so I had the copilot cancel IFR with Approach, advise them we had taken a lightning strike and would be landing on Runway 27 from a right base. I bent the FARs by not flying a proper VFR traffic pattern and not making left-hand turns. Putting the airplane on the ground ASAP was now Job One.

At the appropriate times, the wing flaps extended as they should, the landing gear came down and locked, the engines and props responded properly, and the only aberration I noticed was some extra pressure required on the control wheel when I rolled into and out of the right turn from base to final. A completely normal landing followed.

I taxied to the terminal and shut down in the well-lighted area we normally used for deplaning passengers at night. While the copilot helped our passenger off the airplane and as I was completing the shut-down checklist, the night lineman showed up on the left side and inquired about fueling the airplane. I could see his attention was caught by something else.

“Where’d this oil come from?” he asked.

He rubbed his finger on the fuselage, then said, “It won’t rub off.” Small wonder: What appeared to be oil was really prop metal.

I’ve read a lot about lightning strikes and experienced another one first-hand many years ago. The damage is usually minor: pitted metal, maybe a few small holes in the skin, avionics sometimes fried. But this strike was industrial strength.

The after-accident inspection showed a couple of thumbnail-sized holes burned in the underside of the left nacelle, the apparent entry point of the lightning bolt. From there, we were able to trace the energy path through the left engine mounts, through the propeller blades to the fuselage, around the radome to the right prop blades, then through the right engine and right wing to its exit point on the right wingtip. Based on the prop inspection, the white paint stripe on each blade apparently provided enough resistance to jack up the temperature and melt some prop metal, which was deposited on the fuselage as the blades passed by in close proximity, hence the splatter of “mystery oil” on the left side of the airplane.

When the control system was checked, the mechanics discovered the pulley bearings had been “welded” by the surge of electricity and the cables were being dragged around the pulleys instead of turning them. No wonder the ailerons felt heavy.

The most significant bullet we dodged that night was damage to the propeller reduction gears. These were turbine engines, in which the 30,000 RPM of the power section is reduced to the prop speed of 1900-2200 RPM by a many-toothed gear system. Every time the gear teeth engage and disengage in the presence of a strong electrical field (a.k.a. lightning) high-voltage arcing takes place and particles of gear metal are blown away, resulting eventually in a gear case full of loose metal and guaranteed failure.

In this case, it was estimated that the reduction gear system would probably have failed within 20 minutes or so after the lightning strike. We didn’t get on the ground a moment too soon.

Needless to say, the mechanics went through the entire airplane, checking and testing for subtle damage. The airplane was out of service for weeks, and the bill for repairs, replacements and repainting was in the neighborhood of $100,000.

The culprit in this incident was a rare weather phenomenon called “thundersnow,” which is basically a thunderstorm where the precipitation is snow, but it’s both water and ice generating the charge. It’s an indicator of a heavy snowfall, but it’s rare. One source says thundersnow in the United States is reported on average only 6.3 times per year. With odds like that, you shouldn’t lie awake nights worrying about a lightning strike in a snow storm.

I think this event was a matter of our airplane passing close to a highly charged cloud system and when the distance was just right, the charge was triggered and we became a target. By the way, there was no indication of precip on our radar at any time during this flight.

Ever since, I’ve had no problem coming up with a favorite airplane. It’s a King Air B200, which was already a winner in my personal “overall” for its comfort, handling qualities and the ability to get a reasonable load in and out of short fields. But all that praise takes a distant back seat to the King Air’s performance on that January night.

Richard Taylor is a former military aviator with experience in aircraft as unusual as the C-123 and Grumman Albatross.