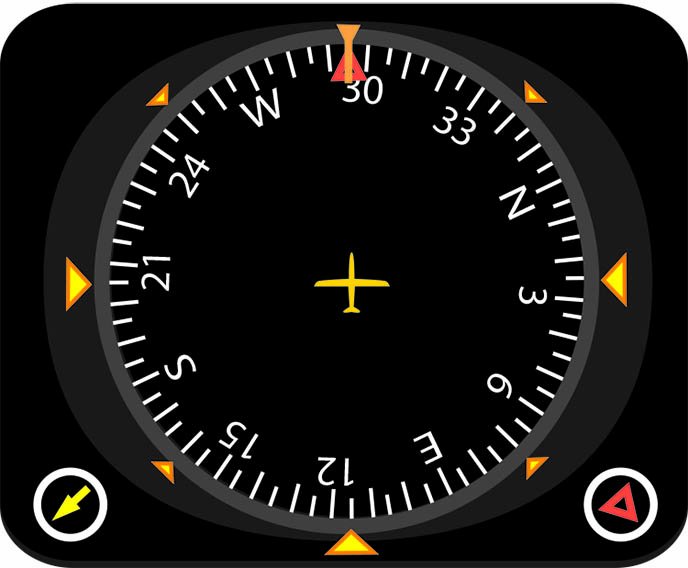 Teaching teaches the teacher. I’ve got over 4000 hours total time and of that over 3000 hours teaching instruments. In that time, my students have taught me quite a bit and I’ve picked up a few tricks on my own. Here’s a compendium of helpful little tips and tricks.

Even far from your destination, try tuning its weather frequency. Don’t hear anything? Open the squelch. You may be surprised how far out you can copy the weather to begin your arrival plan. That far out, though, be sure you’re hearing the broadcast from the right airport. ATIS is updated around 52 minutes after the hour. It might be off the air while the new one is recorded.

If the radio’s been quiet for a while, open the squelch to verify everything is set correctly. Still quiet? Ask ATC for the current altimeter or simply ask for a radio check. Controllers occasionally forget and you might end up NORDO. After five minutes escalation procedures begin. That’s a bother, so it’s best to stay in touch.

At nontower airports, check both comms. Do a VOR check too—if you can pick one up on the ground—and log it before launch. Of course, you can legally perform a check in the air but it’s more difficult and usually less precise while flying. Remember, VOR checks are still required for IFR flight.

When asked to “squawk 1200,” do so immediately, lest you forget. Don’t squawk VFR unless instructed. When ATC says “Radar service terminated,” they expect you to keep the code for what might be ahead. Wait to be told to “squawk 1200” especially in Class B or C.

Brevity in communication marks the polished instrument pilot. A check-in could be as little as: “Approach, Skyflight 423, 5000, India.” (Who you’re calling, who you are, altitude and ATIS.) If ATC complains that your course or altitude is off, just say you’re “correcting.” It’s all recorded—don’t voluntarily hang yourself.

Should you suddenly lose communications, the first question to ask is what you did last, and undo it. Oh, and be sure to use your call sign in every transmission.

Seconds can be precious in IFR. When ATC gives you a new heading, find it on the HI or HSI first. Then turn the bug the shortest way to the new heading unless otherwise instructed. The same idea applies to OBS courses, transponder codes and radio frequencies. For example, if you’re on 125.95 and you’re given a new frequency of 127.05, don’t wind down 36 clicks from .95 to .05, but instead wind it up four clicks.

When you’re navigating on GPS and you get a complex change or even a vector to intercept something new, it’s often quicker to revert to raw data and deal with the box afterwards. It takes much less time to twist an OBS than it does to punch (the right) buttons.

You may get an “automation surprise” if you enable heading mode on your autopilot before setting the bug. It may turn you in the wrong direction and attract unwanted ATC attention. Habitually set the bug to the current heading first—push the “center” button with EFIS—then enable HDG mode and slew to the assigned heading. This way, the autopilot will follow the bug, at lest initially.

You should know what the autopilot will do if the bug is set to or near the reciprocal of your course. This zone of ambiguity has caught many a pilot. Some autopilots will always turn the aircraft the shortest way to the desired heading, while others will turn in the direction you slew the heading bug.

Before using an autopilot, know how to perform its preflight check and know the envelope within which it can operate, such as minimum-maximum airspeeds, altitude engagement and maximum fuel imbalance. Know how (and if) it’ll intercept a course. Operating outside its parameters is dangerous and illegal.

Keep your emergency gear within reach: flashlights, paper charts, extra pencils (better because they don’t leak at altitude), the POH and a spare headset. All are useless if you can’t reach ‘em when you need ‘em. For over-water operations, wear your life vest. The Coast Guard advises that if you don’t have something on or attached to you, like a personal locator beacon or a raft, you will lose it.

Many aircraft have the old nearly-useless 121.5 MHz ELTs. I keep my cell phone on because the Civil Air Patrol can work with cellular companies to triangulate on your cell phone. They can triangulate on just its signal, but it’s better if GPS Location Services is enabled. If the phone’s emissions annoyingly buzz in your ear or affect your radio navigation, go to Airplane or Game mode for a quicker restart.

Being on a discrete squawk code (VFR flight following) will also hasten finding you via radar.

Do It By The Numbers

Airplanes fly by headings. Using “right” and “left” or even “east” and “west” shouldn’t stand alone but serve only to further clarify precise numeric headings. Generalities have their place, but not in precision maneuvers such as holds. For example, you would best brief a parallel entry to a hold by thinking, “At FUNKY I am going to make a parallel entry by turning left to a heading of 295 degrees for one minute. Then I am going to make a left turn to the inbound course of 115 and continue to a 45-degree intercept, or 070 degrees to join the inbound course of 115 degrees.” The more you press yourself for precise numbers instead of just winging it the more precise and comfortable your flying will become.

Some pilots’ arithmetic skills seem to evaporate in an airplane. So do what I do: Cheat. By that I mean use the opposite side of the DG to figure a reciprocal. Or take the reciprocal of a runway you know. Use the tiny 45-degree marks on your instruments to help you figure your next turn. In the example above, read the backside of the instrument to get the inbound course. When you turn to 115, the left-hand 45-degree mark will indicate 070 for the intercept and off you go.

Another trick is calculating time for timed turns as when practicing partial panel. If a standard rate turn is three degrees per second, then a 30-degree turn must take ten seconds, and every ten degrees about three seconds. So if you want to turn left from 360 to 220, use any OBS dial or compass rose to count 330, 300, 270 and 240 as ten seconds each, or 40 seconds to get to 240. Then add two ten-degree slices to get six seconds. Your answer is 46 seconds. You could also count to 210 for 50 seconds and knock off three seconds to get 47 seconds. Doing this visually on an instrument dial is much easier than it is in this text.

This underscores the need to get your heading in mind first before beginning any turn. Then you are ahead of the airplane. Turning without a target heading is being behind the airplane. Few of us can calculate time while turning—our brain is too busy.

When flying GPS glidepaths, ILS glideslopes or constant-angle approaches, trim is your “friend” and power your “enemy.” This sounds extreme, but is deliberately emphatic to make a point. The idea is to set the power once and then leave it alone. Sawing back-and-forth on the power destabilizes the approach. Better to set it once to a predetermined value and then leave it alone as much as possible. Power is the “enemy” because it forces changes in trim. Trim is your “friend” because fine adjustments can be made without touching the power, leaving only one variable to deal with. This makes the airplane do the work and minimizes needle-chasing.

Pilots sometimes get confused when doing unusual attitude recoveries. Another mantra, “In the brown, power down; in the blue power through” seems to work pretty well. A former student told me it saved his neck when he got vertigo during an approach in IMC.

One of the hardest things to learn when flying on the gauges is patience. If vectored to join a localizer, the needle may stay pegged for what seems forever. During this time the urge to do something, anything, can become overpowering — and most likely will be wrong.

If the needle would move, you’d know you were doing the right thing. If it sticks on the wall, it raises the prospect that you’re doing something wrong. Reassure yourself that the heading makes sense, that the nav is tuned correctly and the localizer properly identified with no flag. By then the needle will probably have come alive. If not, ask ATC for a sharper cut because the wind is likely opposing you. Of course, a moving map can provide a lot of confidence.

Impatience expresses itself in other ways such as taking too big a cut at an intercept. You’ll then overshoot and the process can repeat. May I suggest that “lazy” pilots are good pilots? They’re too lazy to have to fix wrong things; it’s less work to do it right the first time.

The moment you feel you are rushing is the time to deliberately s-l-o-w down. Rushing encourages mistakes; being deliberate takes less time overall because mistakes are more likely to be avoided.

Being systematic really helps instrument pilots. An examiner taught me to fly nav 1 and talk on com 1. This way you mentally label these as such and avoid flying or talking on the wrong radio. Nav 2 is for intersecting radials and backup. Com 2 is for things like AWOS and listening ahead to a tower or CTAF to see what’s ahead.

This is just one example of where consistency keeps you out of trouble and makes life easier.

You need not always load non-RNAV approaches into the GPS. Instead, use the GPS to help you get established on the approach and then switch to the primary nav. Flying GPS and localizer needles simultaneously, for example, is tantamount to serving two masters. They never quite agree, so which one do you fly? This is not a question to answer while descending through the muck. (On the other hand, loading a non-RNAV approach may help you in the event of a missed approach.)

Learn how to use OBS mode. It’s simple and pays off big. OBS basically converts any fix into a VOR and takes seconds to set up. OBS mode can help you in ways ranging from discerning the runway centerline to setting an inbound holding course as shown to NITNY. In some GPS navigators it stops waypoint sequencing while performing a hold-in-lieu of a procedure turn. Set the OBS to the inbound course and then fly it. Just short of the fix, turn OBS mode off and make sure it sequences.

Let’s say you are using a second VOR to identify a cross radial along an airway or on approach as shown. With a FROM indication, the fix is ahead of you if the needle points toward the VOR station. It centers when you cross the radial and thereafter points away from the VOR. Remember this one to make monitoring and identifying a crossing radial simple and obvious.

Clear every turn In VMC even if IFR, especially if your airplane is high-wing where the lowered wing could block an aircraft from view. When you’re doing maneuvers, turn left first as overtaking traffic should pass to your right per the right-of-way rules in 91.113.

Every exchange of controls should include a three-way verbal exchange: “My controls,” “Your controls,” “My controls.” This works fine except with George, the autopilot who just beeps when it lets go, even if you didn’t want it to. I don’t have any tricks for that one.

Fred Simonds tries to be a “lazy” CFII in Florida. See his web page at www.fredonflying.com.