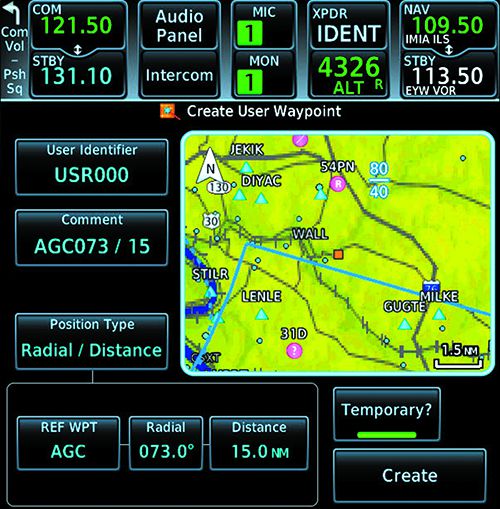 Too many pilots have died because they attempted instrument flight without a thorough working knowledge of their GPS navigators. Do you need to know all 2000-odd G1000 commands? No, but you need the essentials that apply to any GPS FMS.

What’s in your GPS? Mainly, is it WAAS equipped? WAAS offers many IFR options, including flying GPS approaches at your primary and alternate airports, although one must be non-WAAS. WAAS enables vertical guidance for most of those approaches.

Is the database sufficient? Not all navigators, especially older ones, contain all departure and arrival procedures. Data must also be current if flying IFR.

Before a flight, check the system status page. In a G1000, every hardware component is an LRU, a Line Replaceable Unit. A red mark could mean a nogo if, say, the transponder is INOP. The page also shows database currency. In a Garmin GTN navigator, use the External LRUs and System buttons.

RAIM checks are unnecessary with WAAS. Otherwise, AIM 5-1-16 requires RAIM prediction during preflight planning. Does your flight planner do that?

Your instrument currency is paramount. You must interpret the information on the PFD without effort. On an MFD, you should understand every symbol.

In any navigator, the difference is knowing versus fumbling. If you understand how and why you’re doing what you’re doing, you’re good to go.

Much of the GPS magic lies in the flight plan. Be able to create, edit, and verify that the flight plan matches your clearance. “Edit” includes inserting and removing waypoints and ways to skip waypoint(s)—if cleared direct to a fix beyond the next one, highlight that fix within the flight plan and hit Direct. Alternately, you can activate that leg.

The MFD shows a continuous course line for the flight plan. It also offers context like a MOA, weather, or terrain.

Be able to find airports, VORs, airways, and intersections. Use appropriate MFD screens intuitively, including split screens. Optional features like synthetic vision, charts, weather, and radar improve safety—if you can use them.

All told, can you handle any ATC request? Pop quiz: You’re southeast of a VOR. ATC says, “Fly heading 060. Intercept the [VOR] 090 radial and track it outbound.” We can think of three ways to do that. Can you cite at least two?

Know how to put a departure in the flight plan. Departure instructions sometimes include a fix such as AGC073015, defining a fix from the AGC VOR on the 073 radial, 15 NM away. Could you put this into your flight plan?

“What’s it doing now?” usually means that wrong buttons have been pushed, and situational awareness is lost. Make deliberate inputs with known data so you don’t have to ask. Never guess.

Lessons: Maintain awareness of where you are in the flight plan, the next waypoint, proper sequencing, and expected turns. Think and look before you act to avoid “fat-fingered” button errors.

Arrivals can get sporting. ATC can send you to an unexpected waypoint. If ATC advances you beyond one waypoint to another, know how to do that.

Some pilots can’t fly a descent without VNAV. Where should you begin descent? Many of us use three miles per thousand feet at a rate five times groundspeed. Find a rule of thumb that works for you, using the navigator for backup.

Are en-route holds in your GPS database? Most aren’t. If you reach the end of your clearance, hold there and query ATC. Blasting past the intersection is both dangerous and illegal.

The Garmin G1000 PC Trainer or the GTN app lets you practice until you get the buttons just right. Vince Lombardi said, “Practice does not make perfect. Only perfect practice makes perfect.” 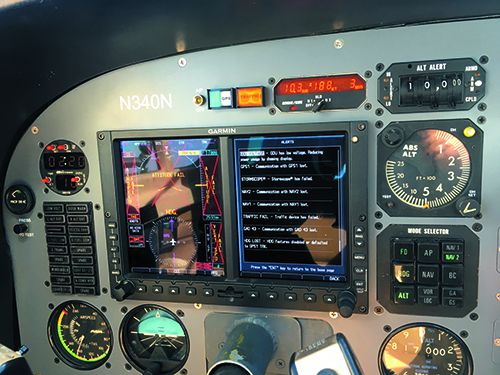 Some ground-based approaches have hook-like procedure turns, but a GPS might only show the straight-in. Know how to reverse direction. You can shoot VOR approaches using GPS on the final approach segment provided the VOR is working and monitored.

Night IMC is high-risk for the unprepared. In 2016, a Piper Comanche bungled an ILS in IMC at night. Overcorrecting, the pilot lost control. Despite a recent IPC, he had not flown night IMC in almost three years.

Many NTSB reports note a fatal loss of control in IMC once the autopilot is disengaged, signifying weaknesses in scans and hand-flying.

An older GPS like the KLN 94 shows the arc, but the distance shown is to the next fix, not along the arc. Garmins show along-arc distance. Fly the arc manually or in heading mode if the autopilot won’t. If you start the arc at a fix, it flows from the flight plan. Joining the arc elsewhere requires leg activation.

Vectors to final might also need to be activated because you’re not flying to a waypoint. Older navigators show only the FAF. Many newer ones include previous approach waypoints.

What’s different about a GPS missed approach waypoint? It’s a flyover waypoint at the runway threshold.

You can practice the same approach repeatedly. To assure terrain clearance, fly to the holding waypoint. GPS sequencing stops as you cross it, and you enter the hold. Highlight the first fix of the approach. When ready, hit Direct. Sequencing resumes, and it guides you to the top of the approach for another try.

Missed approaches can be fatal. In2018 a T182T pilot flew right on the miss instead of left and fatally crashed. The NTSB concluded that the pilot became disoriented. Similarly, instead of flying runway heading to 2000 feet, a Cessna 182 entered an early turn and crashed. The NTSB suggested that this pilot became disoriented due to a somatogravic illusion, which occurs when the vestibular system indicates a climb although the airplane is level. Both crashes occurred after disconnecting their autopilots.

The AP is possibly the most intricate and subtle box aboard. It can kill the unwary pilot who cedes PIC status to its servos and silicon. Often poorly understood, vital information lies in the Airplane Flight Manual Supplement.

Many pilots are unaware of the limits of their AP envelope, which can include maximum and minimum engagement speeds, maximum fuel imbalance, flap settings, minimum engagement altitude, and more. Exceeding any limit means flirting with a loss of control.

Manage your AP. Understand what each mode does and how it interacts with other modes and elements of the airplane, especially the PFD and MFD. If your AP is two-axis (no yaw damper), you must supply rudder inputs.

The muscle is directed by the flight director when the AP is engaged. If you turn FD mode off, will the autopilot disengage? Manually changing the navigation source might disengage the autopilot. Pilots sometimes interpret the FD bars to mean the AP is on. Not so. Look for an annunciation lest nobody is flying.

For practice, fly the flight director without the AP. Typically the FD is a magenta “flying wedge” pair of command bars. Fly the lower inverted-V so that it’s very close to the wedge, and you’ve got it.

Know all events and actions that disconnect the AP. In the GFC 700, four are inside the G1000, such as losing the PFD. Seven ways exist to disengage it manually. What do you do for a trim runaway?

Do not “help” the autopilot. If you do, it trims the other way, perhaps to its limit, causing substantial control force that could lead to loss of control. If you then disconnect the AP, the yoke could snap fully forward or aft.

Autopilots can fly a mix of approaches. Know how each type behaves.

Some pilots join the localizer in NAV mode. Doing so prevents an early descent if your approach clearance is late. Once cleared, don’t forget APR mode or you could fly above the glidepath, and the autopilot won’t capture.

An AP usually does not stop its descent at DA or MDA. Without intervention, it flies you into the ground. In 2010, a G1000 182 pilot failed to level at MDA in hard IMC and killed himself less than three miles from the runway.

Fancier autopilots have VNAV. Some pilots rely on it too much, others are reluctant to use it. Resolve hesitance by reading about VNAV options in your GPS and AP manuals.

An annunciator tells you the autopilot’s mode. To help avert automation surprises, before you press a key, verify aloud that’s the mode you want. Does it become active or armed? In a G1000, active mode is green and armed is white.

Many GPS navigators are organized in a tree-like manner. It’s easy to get lost in the forest without guidance. The G1000 shows a series of trees in the System Overview documentation. Along with a G1000 or PC trainer, you have a map to get around without getting lost. Softkeys are time-savers. Look for them before twisting knobs.

A Cirrus pilot died when its air data computer failed after takeoff. His standby instruments could have saved the day. Lesson: Practice with your standbys. You’ll learn a new scan and discover information you might not have noticed

Time permitting, after an FMS component fails, analyze its extent, what information remains, and how it affects other equipment like the autopilot. The system page might reveal a failed LRU  GFC 700 capabilities fail depending on whether a PFD or MFD fails. It’s all in the Cockpit or Pilot Reference Guide.

In a G1000, screen failure triggers reversion. An LPV approach does not fail-down to an LNAV in a G1000, GTN, or GNS navigator. Knowing in advance what fail-down modes are available, you can recover more quickly from a variety of failures.

A non-WAAS GPS will automatically perform a RAIM check two miles before the FAF. If RAIM fails before or after the FAF, follow the instructions in your GPS manual.

Know how to find the nearest suitable airport.

In words attributed to test pilot Max Stanley, “The Piper Cub is the safest airplane in the world; it can just barely kill you.” Max, it’s not the airplane; it’s us. Any aircraft, car, train, boat, balloon, or even bicycle can bite if mishandled, even a Cub. Break the accident chain. Aspire to be a well-trained pilot who knows the essentials cold.