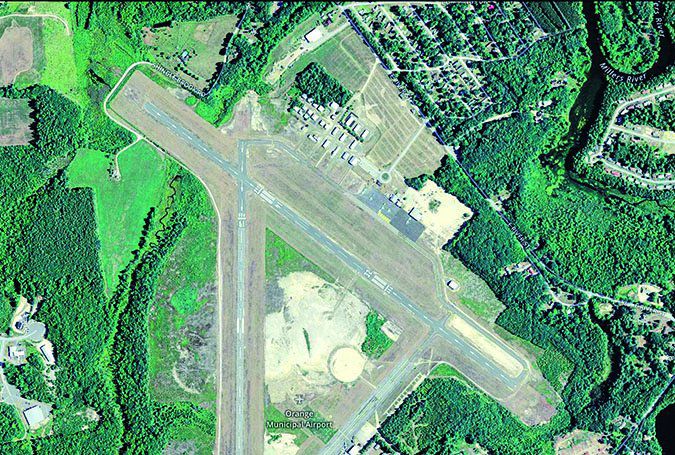 I don’t often look around the cockpit wondering if I’m the target of a practical joke. But that’s the way it felt flying over Orange County Muni (KORE) in 2008. The 4800-foot Runway 32/14 had displaced threshold markings knocking out 1500 feet of runway from both ends. There was more displacement than runway.

Some research revealed the cause was a then-new GPS approach. The approach required a 40:1 obstacle clearance plane and the surveyor had trouble getting those pesky trees out of his transit sights. So he backed up… and kept right on going.

Petitioning for using obstacle standards befitting a small, uncontrolled airport (and, I understand, some land purchase and creative use of chainsaws) has reduced the displacement to 1290 feet, and only on Runway 32.

This begs the question: What happens to the approaches when an airport changes its displaced threshold, as happened at KORE? NOTAMs full of NA for every straight-in approach, that’s what. Unless the airport managers coordinate at least six months in advance with Oke City to get a new approach designed and flight tested.

All straight-in approaches are to a runway threshold. If that threshold is displaced, any pavement before the displacement ceases to exist in the approach designer’s eyes. On the current RNAV (GPS) Rwy 32 at Orange, that means the LPV and LNAV/VNAV glidepaths are to the touchdown zone past the displacement. So is the VDP for the LNAV approach, shown in the profile view. The touchdown zone target is 1000 feet past the threshold, so all glidepaths reach the ground 2290 feet past the start of the pavement.

This makes sense from the pilot’s seat. You want an approach that brings you to usable runway, not a bunch of arrows you have to overfly in gusty winds and low vis. Plus, there’s the whole obstacle thing, which was why the threshold was displaced to begin with.

The lesson is factoring in the displacement when you’re looking at the approach chart. You don’t have 4800 feet of rain-soaked runway to land and stop on that gusty day. If you fly the approach perfectly to the touchdown zone and only float 100 feet further, you’ll touch down about 2400 down the runway. That’s 2400 feet remaining. Maybe you carried an extra 10 percent of approach speed due to the gusts? That’ll cost roughly 20 percent more distance to land and stop.

If you’re flying the LNAV only or circling, remember that if you reach the MAP at RW32 you’re over the displaced threshold, not the beginning of the pavement. Plan your circle accordingly.

Displaced thresholds are just for landing in the direction of the displacement. So back in 2008 when the 4800-foot runway was displaced 1500 feet from both ends, the landing distance either way was 3300 feet. You may roll out, or even touch down and stop, on the displacement for the opposite direction.

To see how this works out, look at New Haven (KHVN), where Runway Declared Distance Information is published in the Chart Supplement.

Start with Runways 02/20. The pavement is 5600 feet, but there’s a 352-foot displacement on the north end (Runway 20). This means the Takeoff Run Available and Takeoff Distance Available (TORA and TODA) in either direction is 5600 feet. TORA and TODA are usually the same, equal to the physical length of the runway. When they differ, it’s often a regs hack to satisfy a requirement for airport standards and transport-category aircraft, so we can ignore it here.

Now note the Landing Distance Available (LDA). It’s the full length of 5600 feet for Runway 02, but only 5248 for Runway 20, because you must pass that displaced threshold before touching down.

The ASDA listed is Accelerate-Stop Distance Available, a concept familiar to multi-engine pilots. Think of it as a worst-case aborted takeoff. It’s usually equal to takeoff distance, but you’ll see that Runway 14 is 238 feet shorter. That’s because there’s a certain overrun factored in, and you’ll see that past the end of Runway 14 things get dicey for keeping all the parts attached to a rolling airplane. Solution: Define a shorter ASDA.

Defining a touchdown point is probably why the runway was shortened on both ends in Orange in 2008. Obstacles for the opposite runway prevented a legal circling maneuver if the full length of the pavement were available.

The start of Runway 14 helpfully demonstrates two other paint schemes related to displacements. The tight chevrons in yellow prior to the displacement are a Relocated Threshold. This shortens the runway for takeoff and landing. It’s not counted in the TORA, TODA, or LDA (it may be overrun for the ASDA). As you can see, it is available for taxi.

The fat chevrons prior to the relocated threshold make a blast pad. This is NA for any operations. Camarillo (KCMA) takes this to an extreme with 9700-ish feet of pavement shortened to 6013. This is probably to save the cost of maintaining a bunch of unnecessary runway, but some airports use blastpads for noise abatement. How? Well, if the runway is too short for those big, noisy jets… No, really, I’m serious.

Displacements and blastpads do funny things with approach lights. It’s simple with the blastpad because you can put light poles there just like it was turf. Well, the digging is a bit tougher at first. That’s worth remembering, however, for the day a buddy challenges you to touch down on brick one of the runway so you decide to drag it in over the chevrons.

Approach lights leading to a displaced threshold get sunk into the pavement because that pavement could be used for takeoff, or landing in the opposite direction. This could make for some odd visuals if you’re on that runway at night.

Bakersfield (KBFL) is even more bizarre in that the entire approach light system for Runway 30R is in the pavement of a displacement, including the flashing sequenced lights of the RAIL. The tower turns off the RAIL for a departing aircraft, so it’s possible you could be on a long straight in approach and see part of the approach lighting system go off while an aircraft departs and climbs out of those same approach lights. Then approach lights would come back on for you to land past them.

Of course, designer-colored recessed lighting is expensive, so when runway remolding happens for the other 99 percent, approach lights simply get omitted—like at Orange, and most places with displaced thresholds. No approach lights means higher visibility mins, so even after a new approach is charted to the displaced threshold, don’t expect it’ll be as accommodating as the one that originally brought you to the edge of the pavement.

In addition to missing approach lights, the displacement adds one last lighting wrinkle to landing in the dark or low vis. The green bar of runway threshold lights would also be recessed into the pavement for a displaced threshold, and those can’t be omitted. However, they can be placed on the right and left of the threshold, rather than across it. You may have seen this in the dark and not given it much thought. Now you know it’s the budget solution.

Better to expect that sight at the end of a long day or low approach than get baffled by a displacement that looks like someone’s idea of a joke.

People flying with Jeff Van West sometimes wonder if they’re the butt of a practical joke, however, that’s another story.