Three hours in a single, even a roomy one like the sturdy Piper Dakota, seems to be about the maximum sitting time for most PICs and especially their passengers. It also happens to be a good time to refuel, as the typical four-to-five-hour endurance allows for landing with ample reserves when it’s time for a break.

This makes Miles City, Montana (KMLS) a perfect weekend fishing getaway by air—you and two family members can be there in just under 2.5 hours from Bismarck, North Dakota (KBIS). Plenty of time, plenty of fuel. Now, that’s with no wind, no weather, and no changes. No such cross-country flight ever really happens, but we can always wish…

In fact, you figure the Dakota can make it nonstop past Miles City to the firstchoice alternate, Billings. It’s a nice big airport 116 NM west of KMLS, adding only an hour flight time. That’d still allow for plenty of reserves. That is, until your passengers, instructed to limit the baggage weight so you could top off the tanks, threw in another 90 pounds of stuff. That reduces your fuel by 14 gallons, about what you’d need to make Billings. But with five-hours’ endurance plus a cushy reserve, a few gallons down isn’t a big deal. Jumbo coolers (of adult beverages) and the other stuff can only make the weekend more fun, anyway.

Maybe you don’t need an alternate under §91.169, thus avoiding the need for alternate-airport fuel per §91.167. Why open a can of worms when you don’t have to? (An appropriate pun for this trip). The Miles City TAF, close to the ETA of 1700Z, forecasts 1500-5 most of the day. It’ll be over three miles visibility, but without a forecast ceiling of at least 2000 feet, alternate and fuel requirements kick in. So the can’s open. Will you (1) “complete the flight” to the destination, KMLS, (2) “fly from that airport to the alternate airport,” KBIL, and (3) “Fly after that for 45 minutes at normal cruising speed”? And: the aircraft must have “enough fuel considering weather reports and forecasts and weather conditions” to do all that (emphasis added).

As a default, you’ve always used 125 knots true airspeed and 12-gph fuel burn, confirmed by the performance numbers. Temperatures at 6000 feet are about 5 degrees C; the mid-range cruising power will be about 65 percent to get you pretty close to the TAS you use, give or take a few knots. The bestpower fuel consumption rate of 11.8 gph is also about right.

Naturally, you were also going to account for the typical brisk headwinds when flying west. Winds aloft forecasts for 6000 and 9000 feet show 20 knots from the west, increasing to 30 approaching Montana. Wind speeds pick up to 45 knots at 9000 feet on average. These charts are great information for the big picture—weather systems affecting wind direction and intensity and such. As such, they don’t offer much granularity for specific flight legs and altitudes (winds aloft presented in flight plan apps are still interpolations). But for choosing altitudes, it’s fine.

Will this meet the regs? Minimally, if you use the lowest feasible cruise altitude of 6000 feet and plan on 100 knots groundspeed. Also, be sure that 6000 feet is OK using the en-route chart. Initially, the OROCAs (Off-route Obstruction Clearance Altitudes, for off-airway planning) allow for IFR altitudes as low as 4000 feet. Then they rise to 6100 feet approaching Miles City. That’s just 100 feet higher than the desired cruise altitude, hardly anything.

The chart reveals a quick-and-easy workaround, though, so you make another tweak: File V2 between BIS and MLS with its 6000-foot MEA. Now, that means a three-minute time penalty, but it doesn’t change the plan. It’s a small price to pay for reconciling a safe altitude with the least headwind. The adjustment also avoids penetrating the northern tips of the Powder River MOA complex, which you’ll check on before heading out in a few hours.

There’s more to consider regarding §91.167. Can you “complete the flight” that will include an instrument approach to KMLS, head to Billings, fly an approach, then land with 45-minutes’ cruise time? Must you also account for any missed approaches? Padding for procedures as if the weather goes below minimums requiring a diversion is a common method for planning fuel reserves, even though there’s no specific reference to this in the regulation. Seems to be a prudent and logical way to plan a flight, but the FAA has a different take on this rule. 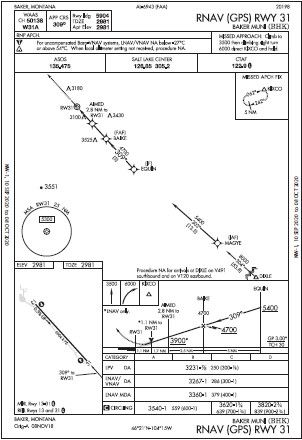 In a 2005 letter clarifying §91.167, the FAA notes that this “requires the pilot to fuel his aircraft with enough fuel to ‘land’ at the destination airport, then fly on to the alternate and operate for 45 additional minutes. The regulation does not specifically speak to an ‘attempt to land’ or ‘attempt to approach’ but it requires that the aircraft have enough fuel to complete the flight to the first airport of intended landing.” Further, “… Having fueled the aircraft with only enough fuel to ‘attempt an approach’ would fall short of the regulatory requirement.” So the intent of the rule, then, is really to ensure a pilot actually lands at the destination with lots of remaining fuel—enough to depart again and fly to the filed alternate, then land there with 45 minutes’ reserve—even though that wouldn’t happen if the pilot successfully lands at the destination. 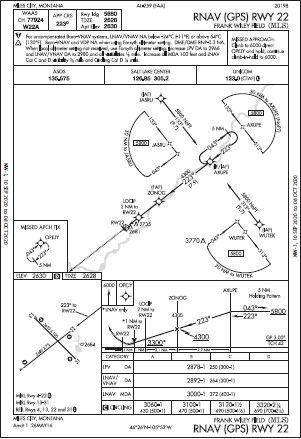 (There’s more to the FAA’s interpretations on §91.167, and there’s even a second letter to the inquirer, delving further into questions about this reg. These might be good to ponder while out on the Yellowstone River.)

At any rate, for the Dakota it’s only a couple more gallons for a full-stop/ takeoff scenario. Start the RNAV 22 approach at AXUPE for a straight-in descent out of the clouds. Add a quarter- hour/three gallons for that (knowing it’ll be less on descent), and it’s 2:20 flight time to land at KMLS.

Using the aircraft’s fuel-to-climb performance, if you then departed, climbed to 6000 feet (say three gallons) and flew the ILS 28R for another straight-in, that’s another 1:05 to BIL. By the numbers, it’s landing with 40 minutes of fuel. Technically, it’s not enough, but is plenty given the moderate weather, right?

Five minutes short means changing something on this flight and you’ve already made a number of tweaks just to make it to Miles City. Do you carry on, leave a cooler behind (gasp!), or replan? Most other days you’d carry on; after all, you’d been conservative with the numbers. But this is going into Montanan landscape, where bigger airports (those with two runways and services) aren’t as plentiful and those winds can fight you all the way. Maybe today another adjustment is best.

There’s a good stopover in Baker, Montana (KBHK). The weather’s similar, with an RNAV approach to Runway 31. The airport’s attended, and it’s about 90 minutes from the start in Bismarck. File to KBHK, using Miles City just 45 minutes away as the alternate, noting that alternate mins require local weather. Pad again for the landing-andcontinuing fuel scenario and you’ll still have well over an hour reserve. Fuel up, then tweak the flight plan (again) from Baker to Miles City and keep Billings as the alternate.

But … Baker’s in the Powder River MOA, which will be active soon covering altitudes from 500 feet to FL 180. Could be another three gallons of fuel as the Aeronautical Information Manual (AIM 3-4-5) advises: “… nonparticipating IFR traffic may be cleared through a MOA if IFR separation can be provided by ATC. Otherwise, ATC will reroute or restrict nonparticipating IFR traffic.”

You depart Bismarck on schedule. You get the predicted delay vectors into and out of the MOA, but otherwise it was a quick turn at Baker. Upon departing, you receive a northbound course to hasten your exit from the MOA back to V2. From UMWEL, cleared direct AXUPE for the approach into KMLS. However, actual groundspeed at 6000 feet is 90 knots. You wouldn’t have made the alternate per §91.167 after all, despite never needing it. Just goes to show that any one change, be it fuel, winds, altitude or route, is rarely enough to cancel a flight. But when it’s one thing after another, you can’t force the issue. Whether it’s packing less baggage or stopping more often, there are always options. Just be sure to use them when appropriate.