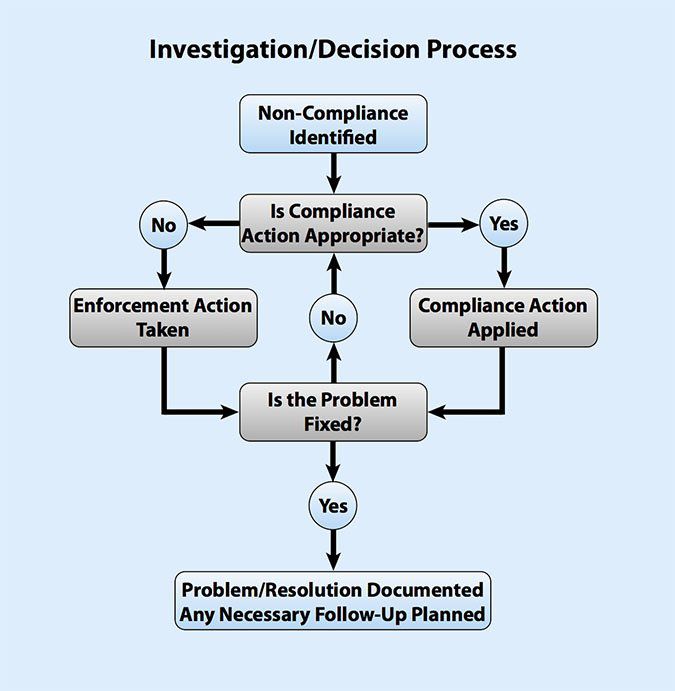 We first wrote about the FAA’s Compliance Philosophy in April 2016. This new thinking promised a refreshing, positive approach to how the FAA handles regulatory deviations. Let’s see how it’s working out.

Before October 2016, formal enforcement was the only tool available to Aviation Safety Inspectors (ASIs). This time-consuming process could take years to resolve and absorbed a lot of FAA resources better used elsewhere. Enforcement was unsuitable in many cases where the violation was unintentional and the pilot displayed a cooperative attitude and desire to set matters straight.

On a larger scale, because little counseling was ever documented, the FAA was unable to accumulate data on the kinds of violations that occurred. This limited the FAA’s ability to develop corrective procedures to permanently fix issues. System-wide issues can be subtle, and lots of data is required to detect them within the myriad complexities of the National Airspace System (NAS).

Before the Compliance Philosophy, the FAA focused on gathering proof that a regulation had been broken and then applied enforcement (punishment) to ensure compliance. Whatever action was taken was based on the outcome of the deviation, perhaps an accident or near-miss. This accomplished little in terms of fixing anything. The new approach is to determine and correct the underlying behavior that caused the deviation.

Compliance Philosophy applies throughout all NAS activities. According to FAA Administrator Michael Huerta, the compliance philosophy seeks to find problems within the NAS before they result in an incident or accident, use the best tools to fix the problems, then monitor the situation to ensure they stay fixed.

A Compliance Action is now generally the FAA’s first response to a deviation. The key is to achieve compliance through a pilot’s willingness and ability to do so. If the pilot exchanges information freely and uses safety management principles (more below), the outcome is likely to be remedial, not punitive. However, blatant or reckless behavior still justifies use of the big stick—enforcement.

A pilot can be eligible for more than one Compliance Action. It is not a one-time-only program.

Compliance Philosophy applies to anyone in the NAS—those who hold any kind of certificate and even non-certificate holders such as passengers.

How the Pilot Should Behave

This new way of fixing safety problems depends greatly on the pilot. Against all prior instinct, free exchange of information is necessary. Hiding a mistake for fear of punishment is the way of the past, but old habits die hard. Let’s remind ourselves that the FAA now prefers compliance. Inspectors know that most pilots voluntarily comply with regs, but deviations occur because we are human and humans make mistakes.

A smart pilot will take pre-emptive remedial action, which the FAA will consider in their response. Being proactive positively demonstrates cooperation and a desire to be compliant.

In all cases, pilots are expected to manage risk by applying risk management, such as using a checklist, completing a Flight Risk Assessment Tool or setting personal minimums.

How Will the FAA Behave?

First, pilots should understand that inspectors are expected to show diligence and timeliness in fulfilling the FAA’s legal responsibility for flight safety.

FAA inspectors will conduct a thorough, unbiased investigation. That means gathering facts, asking questions, and analyzing the event to find out if there is compliance or not. The pilot’s input here is essential and will help determine corrective action if required. Sometimes the matter can be resolved on the spot. In the old days, busting airspace carried an automatic 30-day suspension. The stick usually failed to get at the underlying cause(s) of the violation. Today, every Compliance Action is tailored to the circumstances with the emphasis on achieving compliance, not knee-jerk punishment.

The pilot will receive a letter from the FAA saying the event appears eligible for a compliance action. It will also include a statement that enforcement is not being pursued based on information currently known to the FAA. This is a lot better than a Letter of Investigation that is issued when enforcement is in the wind.

The pilot might first receive an information-gathering phone call to identify the issue and fix it quickly. The pilot’s attitude and willingness to cooperate is critical here. Eventually the pilot could receive a letter, including a brochure explaining the Compliance Philosophy and the Pilot’s Bill of Rights.

The pilot is not required to speak with the FAA immediately after an event. He or she might need time to contemplate answers or research the matter, possibly invoking the Pilot’s Bill of Rights. Doing so to provide correct information to the FAA is fine because that’s demonstrating cooperation. The FAA wants us to provide full and correct information so they can determine appropriate corrective action. Inspectors are aware that the pilot can be busy, or that the event might have occurred months before and demanding a quick written response is unreasonable.

If the FAA cannot determine the facts of the case or cannot identify proper remediation that the pilot agrees to, the FAA can then demand a reexamination under 49 U.S. Code 44709, (aka a “709 ride”) or issue a suspension pending demonstration of qualification, competence and proficiency.

Remember, the investigation’s purpose is to determine compliance and any required actions. The preferred route is compliance, but enforcement will be used if necessary. Expect the FAA to include follow-up action to assure that the safety issue has been fixed.

If the issue involves diminished knowledge or skills, an appropriate Compliance Action might be remedial training. However, if there is a lack of qualification or competence, then reexamination could be required to demonstrate competency. If there has been a lack of care or judgment, enforcement will result.

Example: A commercial pilot ran out of fuel. The ASI determined that flawed procedures and diminished skills led to the fuel exhaustion. The ASI determined that the pilot was weak on cross-country procedures, flight planning, and navigation. The pilot successfully completed mandated training. Sometime later, an ASI followed up and concluded that the issues were resolved. Case closed.

At the most basic level, inspectors can still conduct informal counseling where a Compliance Action is not called for. Such was the case of a pilot who was ramp checked only to find his required certificates were not on his person. The pilot walked the inspector to his hangar and showed his certificates. Done.

How Has It Gone?

The numbers (see table) show that enforcement actions were down by over a thousand cases under Compliance Philosophy, which arrived at the very beginning of the federal fiscal year 2016.

The decrease in Administrative Actions (warnings) was even more dramatic. Informal Actions decreased to zero as they were replaced by Compliance Actions in FY2016. The rather large number of Compliance Actions represents in part the ability to document such actions that did not exist in FY2015. Recall that an essential part of the Compliance Action program is to acquire documentation to use in discovering and correcting issues.

Not in these numbers is that the average time to complete a Compliance Action is now just under four weeks. The reduced number of legal cases leads a trend toward resolving enforcement cases more rapidly than was ever possible before.

Compliance Philosophy clearly seems to be working as planned. Some pilots who’ve been through the process found it a positive experience. Inspectors were cordial, helpful, pro-GA and just wanted pilots to be safe. Many said that it was certainly preferable to enforcement.

Interestingly, inspectors have long provided informal counseling and remediation. Only recently has the process been formally recognized. In aviation, if it isn’t documented, it didn’t happen.

Finally, NASA ASRS reports are always a good idea. They need to be filed within just 10 days. An ASRS report remains confidential and is not part of a Compliance Action investigation.