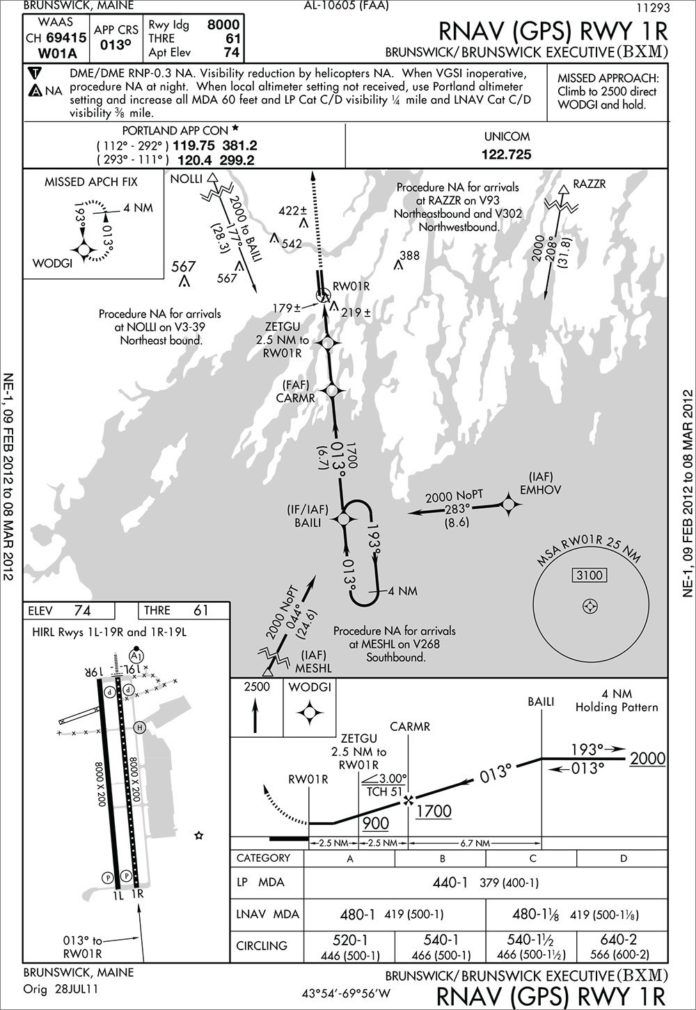 The plate says it’s an option. Your GPS software and database are up-to-date. Yet that new LP approach refuses to load. That could be a plus if you like vertical guidance.

With the advent of WAAS, the FAA developed approaches that provided vertical guidance while offering the lateral accuracy that previously was only available with an ILS or localizer approach. It was named LPV for Localizer Performance with Vertical and now sports decision heights as low as 200 feet.

For purely technical reasons, it could not be considered a precision approach, so a new term was invented to distinguish it both from an ILS and from all the other non-precision approaches. It received the moniker of APV (Approach with Vertical guidance), which was also applied to the LNAV/VNAV approaches. As of this writing, the LPV approach has become ubiquitous with over 2700 published, with almost 600 of them with the 200-foot DH minimums.

There are runways that can’t meet the requirements for an LPV approach, but would benefit from the tighter lateral guidance afforded by WAAS. The FAA specified a new approach type that uses the lateral aspect of the LPV approach without the vertical guidance. These are LP approaches, and are in many ways a GPS equivalent to a localizer-only approach.

The MDA for LNAV and LP approaches are set 250 feet above the highest obstacle in the evaluated area of the final approach segment. However, the tighter lateral guidance for LP means the area evaluated is much narrower than for the LNAV approach. An obstacle that affects an LNAV approach might not affect an LP version and earn lower minimums for the LP approach.

Because the same approach chart shows different minimums for different versions of the approach, the pilot must watch the GPS annunciation to see which minimums are available. The GPS decides this as it does a final integrity check at least two miles before the FAF (but usually just passing the last IF). It will always load the highest service level available, so if an approach has LPV, LNAV/VNAV and LNAV minimums, only LPV will be loaded. If it has LP and LNAV minimums, only LP will be loaded.

In both cases, if there isn’t sufficient ability, only LNAV will be loaded, and there won’t be an option for advisory vertical guidance, what Garmin calls LNAV+V. This isn’t an official part of the charted approach, but is available on the vast majority of straight-in approaches with only LNAV minimums.

Originally, the FAA said they would only use the LP approach type in cases where vertical guidance wasn’t feasible. That morphed into a de-facto policy of each runway end will either have an LPV or an LP approach procedure, if at all possible, regardless of any lowering of the MDA over an existing LNAV approach.

The FAA published its first LP approach procedure in January 2010 as the RNAV (GPS) RWY 36 at Peter O. Knight Field in Tampa, Fla. The LP MDA was 60 feet lower than the LNAV. Since then, the FAA has published 240 LP approaches, 40 percent of which have no improvement in MDA. I brought the issue up with the FAA. Now they will only develop new LP procedures if there is at least a 20-foot improvement in the MDA.

Not Even Available
As more and more LP approaches were published, I asked if anyone had flown one. To my surprise, everyone who tried one could not get the GPS to annunciate LP. It would only bring up LNAV. We confirmed they were at the correct software level, so I began to investigate.

It turns out the issue is at Jeppesen, the provider of the databases. ARINC 424 revision 19, the standard they were using, did not support the coding of LP approaches. They expected revision 20 to include this definition by the end of 2011. But that wouldn’t be enough because they didn’t have software in place to process the LP approach type. They expect to have this capability by the middle of this year (see Jeppesen’s “ADVANCE NOTIFICATION of NavData Output Change,” dated Dec. 14, 2011.)

So it will be at least 18 months from the first approach being published before the capability is actually available. But don’t plan on flying any LP approaches until all this is accomplished and LP starts showing up on your approach annunciation.

John Collins is a TERPS geek and flight instructor in North Carolina.