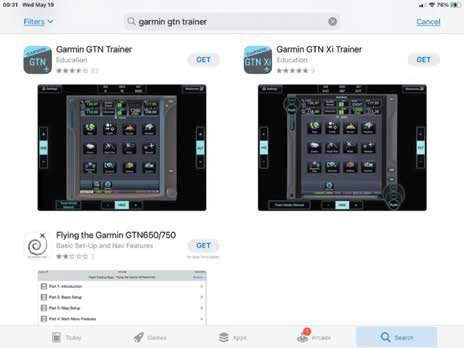 Only the Frequency Differs

Answer 5 to the Quiz in February 2021 explains that “[f]iber-optic communication is light and not electromagnetic.” James Clerk Maxwell would disagree. Radio waves, light, and x-rays are all the same thing, just at different frequencies. (I don’t dispute that the light signal in the fiber-optical cable is unaffected by space weather.) My apologies for what may seem like nitpicking to some. I love the magazine and the Quiz.

However, that distinction is lost on many folks and one that, had we made it, might have caused more confusion than clarity.

To Garmin: I Want My Mac

I’ve received IFR Magazine for quite a while and appreciate all of the articles. Reading in the April edition, “That Elusive Proficiency,” I noted a reference to Garmin’s G1000 trainer. Garmin trainers are not, as far as I know, currently available on a Mac device.

I currently fly an Archer with a sixpack and a Garmin 430W. I’ve been trying everything I can think of to get and use a Garmin Trainer for the 430W, but nothing is available for a Mac. I bought an old Dell computer and tried to use it, but it’s very cumbersome and I can’t get a current database. I tried downloading Virtual Box to run it on my Mac, but it’s unable to connect to the Garmin site.

Is there any way for you to make a plea to Garmin to have their trainers available on a Mac format? A long time ago, Jepps weren’t available for Mac users either. Thank goodness for ForeFlight!

As popular as the Mac/IOS platform has become, the simple truth is that it’s well behind Windows in market penetration.

We’ve had similar conversations with Garmin and there are two points they’ll make. First, the actual device software is much easier to port to a Windows environment than a Mac. Plus, their trainers are designed to provide the user with a platform on which to learn the emulated device. They are not intended to substitute for a flight simulator. Thus, Garmin makes no guarantee to support them with current data, etc. (You can certainly learn to use the emulated device with old data.)

That said, some current Garmin products for which Garmin does offer trainers have available IOS-based versions of the trainers intended to run on your iPad. (See the image of GTN trainers from app store above.) These are not usually as full functioned as the Windows versions, but are sufficient to learn the buttonology. Also, with current products, the trainers are frequently updated to match updates to the emulated device, and the data is usually updated at the same time.

Obviously, the 430/530 (and W versions) are not current products, thus there is limited support for the trainers.

We can offer two suggestions. One, of course, is to get a current, capable Windows device on which to run your selected trainer. Modest pricing of these makes this your most affordable option that, compared to the cost of flying anything these days, is really quite modest.

The other suggestion is to purchase (or build your own) flight simulator (also Windows-based). There are many plugins that provide the 430/530/W functionality and some even allow updating the data. To go this direction, however, even if you build it yourself, would be far more expensive, probably starting at a few thousand dollars and going up from
there.

The FAA chart publication change is a big mistake and disappointing. Even more disappointing is to read that AOPA advocated for the chart cycle change. This is a solution in search of a problem.

The FAA continues to make flying more difficult and AOPA and others support it, according to the article on Page 13 of my May issue of AOPA Pilot. Because “90 percent of pilots use electronic charts” does not mean none of those 90 percent ever use paper charts. Even if it did, why penalize the remaining few percent?

I strongly believe this is a mistake for many reasons:

Yes, electronic charts are nice and iPads are great but there are times when a paper chart is advantageous for flight planning because it lets you see the big picture at a glance. You can’t unfold an iPad to see an entire sectional.

Years ago, if an FBO ordered more charts than it sold, they could cut out the date information and return them for a credit or refund. This saved money for the FBO, and enabled them to stock a supply of current charts. It enabled the FBO or pilot shop to stock charts outside of their local area as a means of stimulating interest in flying to new places. Today the FBO can no longer return the unused charts for credit. The paper is still wasted but the FBO is not reimbursed.

The FAA should return to the old six-month schedule for sectional and terminal area charts. In as many cases as practical, significant chart changes (such as a radio frequency or airspace classification) should be synchronized to occur on the changeover date, reducing the need for interim NOTAMs.

When the present change was made the FAA mandated that all charts would expire on the same date, rather than on staggered dates. This means that all new charts must ship out at the same time. Logistically this must put a big strain on the shipping infrastructure. If the FAA can be persuaded to return to the previous six month cycle it would also ease the workload on production and shipping to return to the staggered expiration dates.

An option that the FAA might consider would be to make all charts print-on-demand, as is done with some books. A pilot would order a new chart when he felt he needed one and it would be sent to him by postal mail. It would be up to date on the day it was printed. This would eliminate the necessity of FBOs stocking a supply of charts, but they could still order a few frequently used charts if they wished to keep some in stock for walk-in customers and transient pilots. This may be too radical for the FAA to get its head around.

It is my belief that this new FAA policy is detrimental to aviation safety and will have a negative effect on flight training and safety. Let’s all hope that the FAA will reconsider.

You make some interesting points, Barry. You suggest that one solution is print on demand. This is available today, although not quite in the form you suggest. Anyone can go to the FAA web site and navigate to any of the charts. (Air Traffic → Flight Information → Aeronautical Information Services → Digital Products) You can download and print anything there. Obviously, few of us can print something as large as a sectional or en-route chart, but it’s possible to zoom in and print portions one might want, although this isn’t that far off from viewing them electronically in that you get just a small snippet of the chart. Obviously, printing your own approach charts, though, is much more practical.

One last difference is that the on-line charts are simply pdf files of the print chart, updated and made available on the same schedule. This compares with your idea that the print-on-demand concept has charts with every update instantly applied. This isn’t likely to happen any time soon as a lot of the update mechanisms are tied to the publication cycles. Keeping downloadable or on-line charts evergreen would require overhauling the update and approval process.