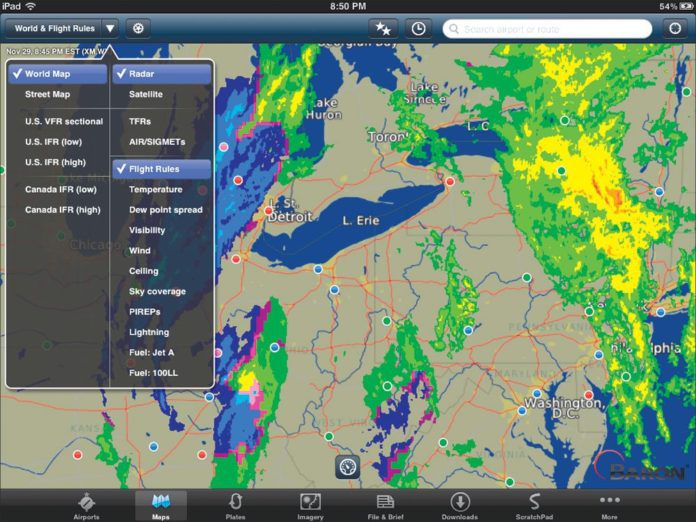 “There’s an app for that” is as true as ever (at least for a couple more months). Here’s a list of some of the latest developments from an IFR perspective.

I get the question a lot: “What’s the best iPad app for aviation?” It’s impossible to answer. Not only is there no perfect app for all users, the field changes so quickly advice is only good until the competition releases its next update. In fact, I can’t even answer what’s the best app for only chart use under IFR.

That said, despite the stream of newcomers, I find that the big names in the field continue to have the strongest offerings and the best overall deals. Here’s a summary of what’s new from those folks and some of the contenders trying to unseat their dominance. Is this comprehensive? No, we’d need a whole issue for that. But if you’re one of the 100,000 or so iPad pilots, this is good stuff to know about.

ForeFlight
The industry leader continues to be ForeFlight. They’ve hit the right mix of an interface most pilots can use without taking online training courses, and features folks want most. It’s both a great preflight tool and a great in-flight chart reader.

One big addition to ForeFlight is inflight weather. Right now XM weather is available with a purchase of the $1224 receiver and WiFi unit. The setup is two black boxes and several wires, which stretches the bounds of the term “portable.” But the connection to your iPad is via WiFi, so you can bury most of the hardware in the baggage area. Once it fires up, the system works well and is integrated nicely into ForeFlight. METARs and TAFs appear just as they would if you had used the internet for weather, except they say the source was XM. NEXRAD appears on any of the charts.

Not all the data from XM is available in ForeFlight yet. Current icing potential is notably missing, for example. The GPS position from the XM receiver can’t port through the iPad yet, but that should change soon. ForeFlight has also added PIREPS—something it’s been lacking for some time—from both XM and internet sources.

Tyson Weihs, President of ForeFlight, tells me that ADS-B weather will be available next year and hints at some new hardware that may make that a strongly desirable option. However, ADS-B versus XM weather isn’t a perfectly simple comparison. You can check out the February issue of Aviation Consumer or some of the videos for a more detailed comparison there.

The other big addition to ForeFlight is Canadian charts. This is an additional subscription of $150/year for all of Canada. Weihs says he has long-range plans to cover most of North America to some degree or another. There are several other additions to ForeFlight including on-map measuring and typing on the scratch pad. While not that new, they also added a dedicated charts tab so you can quickly toggle between en route and approach charts. U.S. coverage is $75/year, or $150/year if you want georeferenced approach charts.

WingX
Hilton Goldstein’s WingX continues to push the bounds of what an iPad can do. WingX’s latest coup was adding synthetic vision (video available on AVweb’s YouTube channel). This can be run using the GPS for basic terrain awareness, or the iPad can actually connect to a $700 AHRS from Levil Aviation and display real attitude information. While it might not be ideal to fly by, I’ve tried it and it can be done. More realistically, it would be a huge assistance in general instrument flight or after a vacuum failure in an older aircraft.

WingX is also the most capable of all the iPad apps out there, if not necessarily the easiest to use. If you take the time to learn your way around WingX, however, you’ll be rewarded with the ability to layer terrain warnings, airspace, runway information and weather over most any chart or background. You can view split screen to see an approach next to an en route chart. Chart legends, timers, distances to nearby navaids and other cool options are sprinkled throughout the software for those willing to learn where they are.

WingX is also the fastest by far with downloading data. Goldstein tells me this is due to serious efforts in data compression. It shows. It’s also capable of running on the lowly iPhone quite well. Datalink weather is available via ADS-B with the $995 receiver from SkyRadar LLC. The unit provides both ADS-B data and GPS position. WingX can display traffic when connected to a Zaon traffic system as well.

WingX is not the strongest preflight tool, as it doesn’t put internet-based weather and PIREPs on a map like ForeFlight or Pilot MyCast. The airport data isn’t laid out as elegantly as other apps but it’s all there. WingX is $99/year or $150/year with georeferencing. Synthetic vision adds another $99/year.

Flight Guide
New to our list is the iEFB from Flight Guide. These are the folks who brought you the little brown airport books. Flight Guide has always been more of a VFR product; it’s specialty being custom airport information and airport diagrams to every field. But it has a few tricks in its IFR bag.

The most innovative trick is putting the plan view of an instrument approach right on top of an IFR or VFR chart. Flight Guide also offers IFR area charts, and both seamless or complete charts. This lets you see the margins when you want or have one big chart when you don’t. The new app has several customizable fields for GPS information, connects to Zaon traffic and will soon show XM weather.

I found it still a bit green in some areas and would quit or lock up at times on my iPad. It’s the slowest to download charts (not a problem if you leave it overnight) and the slowest to switch between charts in flight. I have heard complaints that the company has neglected its print business lately due to focus on the iPad app, but I haven’t personally seen any lack of customer service.

Because it’s designed for airport information, that part of the program is quite easy to use and complete. I was looking for a VOT frequency the other day: Tough to find in ForeFlight or WingX, but right where I expected in Flight Guide. Flight Guide has a tiered pricing structure that runs from $99 to $199/year. They also sell their own WiFi GPS for $299, which adds vertical-angle information that could be handy on approaches.

Pilot MyCast
Garmin’s Pilot MyCast used to be just a weather tool, but it’s expanded to test its mettle as an in-flight tool. It offers WAC charts for backgrounds, which lets you see more details when zoomed out. They’ve added more options for laying data and advanced flight planning.

A Flight-instruments page fills the screen at a tap. This could be a real boon with instrument failure. It’s almost exactly the same as what you’d see on a Garmin 496 or small Garmin aera, there’s no attitude information. There’s no datalink weather for it yet, but that’s in the works. They did change the code so METARs, TAFs and winds downloaded before flight are accessible for several hours. A kudos to MyCast that it offers area forecasts easily. Other apps bury this in the text of a DUATs briefing.

I’ve found this enhanced version of MyCast to be a terrific preflight tool—winds aloft on a slider for both time and altitude is great—but not as easy to use in the cockpit. It also seems less stable on my iPad 1, as I’ve had it quit spontaneously in flight. It restarts almost instantly, however. For ease of looking up airport information, I think it sits somewhere between ForeFlight and WingX. MyCast is $9.95/month.

FltPlan.com
What must be the country’s most popular flight-planning website has its own app. The big plus is that it’s free. You can download charts—including Canada—for viewing in flight. That might be worth having right there if you only make the occasional foray to the Great White North. The management of these isn’t nearly as simple as a paid app, but what do you want for free?

The app is also nicely integrated into the FltPlan.com website and can grab your nav logs and weather briefings. I haven’t spent much time with it, but it’s worth a look if you only need charts without many frills and already depend on FltPlan.com.

FreeFlight
FreeFlight from Seattle Avionics is a refreshingly simple app for the iPhone that’s just for flight planning (and, yes, it’s free). It’s in beta as I write this, but probably available by the time you read it. Its two big items are that it gives you airport info and weather at a glance and does route planning. What makes that worthwhile is that it does both well.

The novel thing about the flight planning is that it’s not done on the phone. Your plan is done on servers back at Seattle Avionics, where it can run much more detailed calculations, taking into account many possible routes, winds along the entire route and your preferences, such as maximum and minimum altitudes. You’ll get back what’s probably the most efficient route and altitudes for the entire trip.

So what’s the best app? It’s the one that works best for you. (Unchanged but still a great deal is the budget SkyCharts Pro). The field is in flux with potential changes in chart pricing (see sidebar). But until then, there’s an option out there for everyone.

Update on charges for FAA charts
Well, the FAA had their meeting with app vendors who use AeroNav charts to lay out their proposal for new fees. As we said last month, the entire app industry has grown up on the availability of digital sectional, en route, approach and other charts and documents from the FAA for little or no money.

The free charts were only given because, before the iPad revolution, there weren’t that many people using digital sectionals. Now everyone is and someone has to pay. The price the FAA told attendees at the meeting is $5 million for 2012, which they translated back into $150 per licence to use FAA charts for the entire U.S.

There are so many problems and holes with the FAA’s logical argument behind these numbers that I can’t cover them all here, and it probably doesn’t matter. They discovered at the meeting that many of their numeric assumptions were incorrect and that the industry won’t do well with an extra $150 for every subscription to ForeFlight or WingX.

So we’re back in a wait-and-see cycle for the FAA’s revised proposal on costs for digital charts. As I point out in Remarks on page 2, it might not even matter in the long run. Until then, enjoy your cheap digital charts because even if we don’t know how much the price will go up, it will certainly go up some. —JVW