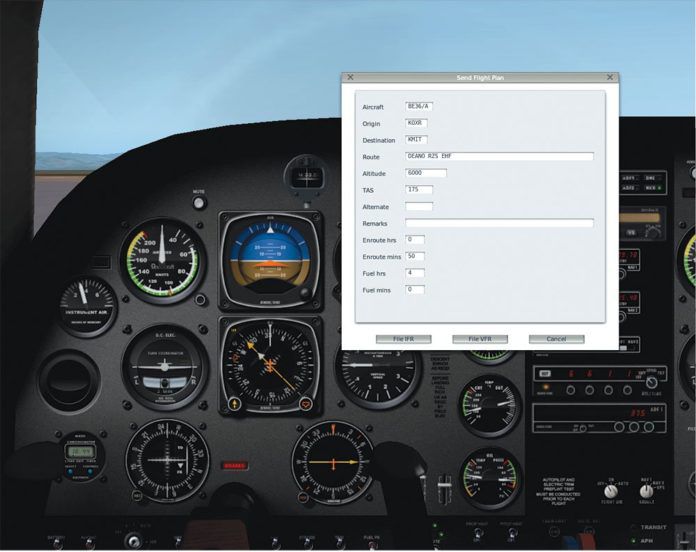 PilotEdge offers ATC for your home simulator with real, live humans doing the controlling. It’s not quite as real as reality, but it adds a whole new dimension to home practice.

There’s no question that practicing on your desktop flight simulator will help your instrument flying. It exercises your instrument scan, it solidifies your procedures such as chart briefings, and it keeps you connected to flying when grabbing a real airplane isn’t an option.

What desktop simming has lacked is a good facsimile for ATC. The automated ones built into some home flight simulators are too rudimentary. There are online ATC communities, such as VATSIM, but you’ve got to have the ambition to set up the connection and the quality of what you get varies wildly; some volunteer controllers are as good as O’Hare Approach, while others … aren’t.

Last fall, a service called PilotEdge (PE) took the VATSIM idea and went commercial, making the connection process as easy as possible, hiring select staff to handle the air traffic control functions, and setting up a website to support training and community. We gave PE a try, both with the account they gave us and incognito, and were generally impressed.

Hooking Up
The system works with Microsoft Flight Simulator 2004, Microsoft FSX and X-Plane (Mac and Windows versions). Setup is simple: Install the right plug-ins, fire up your sim, adjust a few settings and you’re good to go.

In the X-Plane sim we were using, there’s a pop-up window to connect to the PE network where you can set your aircraft type and call sign. Once connected, you can file a flight plan from the same pop-up. If you’re running Flight Simulator, you can also open a chat window with the controllers, but that’s not exactly realistic unless you’re having NextGen fantasies.

You’ll also want to get your charts ready for the area of L.A. Center and Oakland Center, as that’s the only airspace covered by PE controllers. That includes all the underlying TRACONs, Towers, and Ground frequencies, however. It’s also only staffed from 8 a.m. to 11 p.m. Pacific time (1500-0600 Zulu). You can fly 24/7 and share the frequencies with other pilots, but there won’t be any controllers on the off hours.

How Real Is It?
Once you map the push-to-talk function on your sim, it works like the real thing. Tune the Com radio on your sim to the local Ground frequency actually used for the real airport to get permission to taxi. Contact the published Tower frequency for clearance to take off. If you launch from an uncontrolled field, you call the overlying ATC facility for a clearance or pick it up in the air. By the way, if you depart an uncontrolled field, you’re expected to self-announce on CTAF.

Want to get vectors for some practice approaches? Request them just like the real world. There are some places where it’s actually better than real: If you took off from one airport and leveled in cruise but now want to zip forward 90 miles to your destination’s IAF, make a request for exactly that from ATC. If only you could do that in a real airplane.

The PE controllers are a mix of retired controllers, students of ATC training programs hoping to become controllers and a few enthusiasts who’ve demonstrated professional-level skill.

We had three different pilots try PE on three different systems. Two had no complaints other than one tight turn onto a localizer. One felt the service he got wasn’t quite up to real-world standards and had trouble understanding the controller (one PE controller happens to be Russian). But overall, we found the phraseology, skill at vectoring, and use of real-world procedures quite good. In fact, we requested VFR practice approaches just out of habit and, after being given a heading and altitude, were reminded to “maintain VFR.” Also, the PE controllers won’t hear you if you’re on the wrong frequency—or see you if you forget to turn on your transponder. Ahem.

We stumbled on a limitation that X-Plane pilots transmit on Com 1 no matter what the audio panel is set to. When we accidently did a CTAF call on San Luis Tower frequency, we got a polite reprimand worded just like it would in the real world. At least he didn’t give us a phone number to call.
There were a couple misses on ATC’s part. On one unplanned missed approach, we checked back in and expected the usual “Say intentions.” The controller instead gave us missed-approach instructions and an EFC time. But it’s possible that could happen in the real world.

The biggest disconnect with reality we experienced was simply low traffic volumes. There aren’t that many pilots on the PE network at a given time. We don’t think it needs to be as busy as the real L.A. basin, but it’s even quiet by smaller-facility standards. PE is working to combat this with recorded, real, background chatter, drone aircraft, and focus fields where pilots can congregate, but it’s not that effective, in our view. Our talks with flight schools and individual users of the service echoed this across the board. Doug Duston, a PE user, put it best: “This is one network that will get better when people clog it up.”

A related oddity is they only have one controller working all the Center and Approach frequencies and one other working all Towers and Grounds. So you hear a voice change when switching to Tower, but it’s the same voice after a handoff from Center to Approach. You’ll also hear all the ATC transmissions for all Centers and Approaches even if you don’t hear all the pilots. This would change if they had more controllers.

Michael Phillips, Owner of Aviation Instruction Simulator Training in the L.A. area, uses PE in conjunction with his Redbird fully-enclosed simulator. We asked how well the PE procedures match up with the real thing, as that’s his home airspace. “In the beginning, there were some differences,” he said. “They had to try to follow the exact book procedures,” But as he discovered places where local reality was different, he told PE and they changed. Phillips says that because they have both Navy and FAA training facilities in their area, the PE controllers are sometimes, “more tuned in than the real thing.” If there is an error, Phillips just works it in as a learning opportunity. He added that with controllers doing the vectoring, he gets to focus more on the instruction.

Phillips also has all his student pilot fly a scenario where they are above an undercast with low fuel and must declare an emergency with the PE controllers. The student gets vectored down, but the experience includes the spooky bits like asking the number of souls on board. “It’s incredible to watch because the fear and the panic is there, but they settle down and they get the vectors,” said Phillips. “We really can’t go do that in a 172 with the same effect.”

Bottom Line
Obviously this can’t all be free, and it isn’t. Membership starts at $15/month, but there’s a 14-day free trial. The pilots we talked to all seemed to think that was worth it or even a bargain compared to real airplane time. It definitely adds some realism and ups the ante not to embarrass yourself. Whether that’s worth the cost is a personal call. Note that you’ll also need to invest in some third-party add-ons for FSX or X-Plane if you want to practice realistic GPS approaches.

You can see how many users are online at a given time, as well as usage stats (including personalized ones for yourself). We’re not sure how PE can survive at the usage level it’s at right now. But we hope they get past that hump because the system basically delivers as advertised right now and has the potential to become better. You can check it out yourself at www.pilotedge.net.