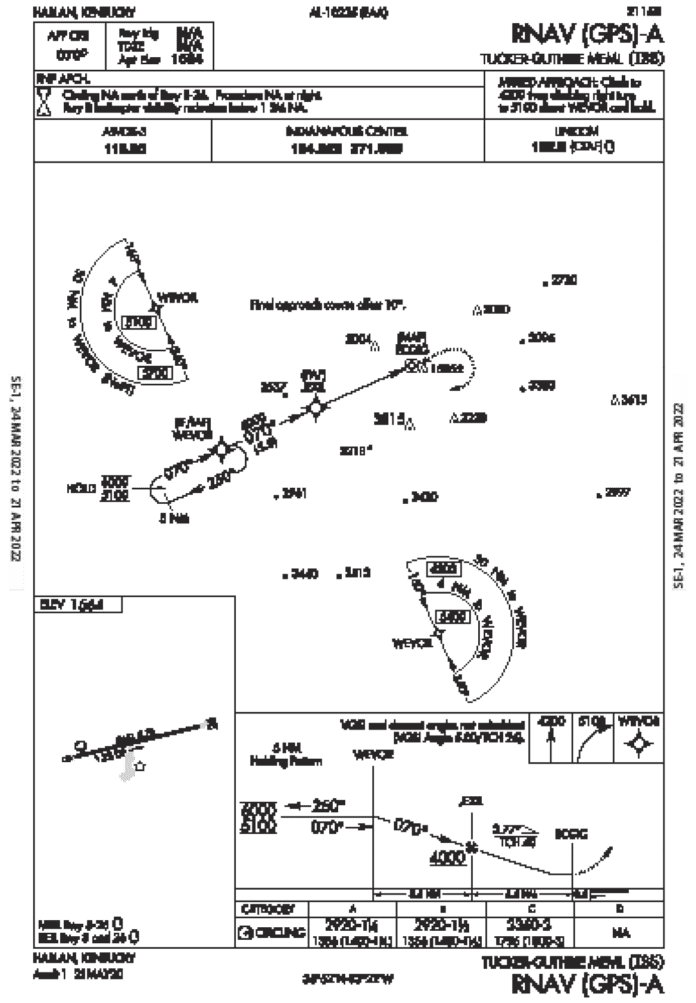 Flying a reliable but legacy-equipped airplane, you’re looking for a way to make it into Tucker-Guthrie Memorial Airport, Harlan, Kentucky, (I35) with an IFR flight plan ending with a visual approach, or just VFR. It’s a long way from home in the flatlands of central Illinois—a one state to the southeast—but a 50-gallon getaway is kinda the point of this trip. And so, a couple of strategies can make it work. Start with better weather, and then plan the arrival.

If you left tomorrow, you’d be departing in nearly clear skies, but flying into I35 with 800 overcast and the approach—yes, there’s just one. But it’s an RNAV-A, and your backcountry bird has only radio navigation installed. While technically IFR-certified, it’s really only useful en route and for the occasional ILS.

But you do have a tablet-based GPS, moving map and all, you can use for reference. You delay the trip a day until the weather clears up for a visual approach while referencing the approach, which not only has a straight-in to Runway 8, it has distances and stepdowns to ensure obstacle avoidance.

Speaking of which, I35 comes with notes like “ARPT LCTD IN MOUNTAINOUS TERRAIN…POSSIBLE TURBULENCE.” And: “TREES BOTH SIDES OF RWY VIOLATE 7:1 TRANSITIONAL SURFACES.” That one sounds like a job for TERPS. In fact, transitional surfaces don’t get a mention in the AIM or other operational pubs, but in FAA Order 8260.3E, they are defined as the outer rims of a final approach course, drawn as “inclined planes with a slope of 7:1 that extend upward and outward 5000 feet from the edge of the final approach area. The transitional surfaces begin at a height no less than 250 feet below the MDA.” Obstacles penetrating those areas get a note, as in this case, while adding restrictions to night operations or circling. That’s another reason to want visual weather backed up with the RNAV-A, preferably on a straight-in to 8.

In any case, it’s clear that the arrival to Harlan will be sporty enough without turbulence or wayward trees. While the runway is adequate (but not overly long) at 3461 feet, it’s in an unfamiliar area. In the meantime, there’s more to know about the airport: Runway 8/26 has some lighting, but not a complete set. Along with runway edge lights, there are (for daytime only) REIL and a 2-box VASI on the left side of 8. The other end has REIL but no additional lights.

Luckily, waiting a day will mean a wind shift to an easterly breeze when you plan to arrive, so a straight-in on Runway 8 looks feasible using the RNAV-A’s final approach course of 70 degrees. While titled as a circling approach with one MDA at 2920 feet for categories A and B, the profile view does sketch out a decent path for a straight-in. However, what started out as sporty has become, well, a bit technical. First of all, what’s with the nearly straight-in approach with only a circling MDA?

The Instrument Procedures Handbook lists three reasons a procedure will be titled as such: An offset of more than 30 degrees, lack of a “clearly defined” runway, or a descent gradient of more than 400 feet per NM between the final approach fix and threshold crossing height, in this case 26 feet. The latter applies here, with the straight-in provision that the handbook notes is allowable “if a normal descent and landing can be made”—a reg that applies, of course, to any approach maneuver.

So the whole -A thing is about the 3.77-degree glidepath from JEXIL to the MAP, ECGIG. While it is a bit steeper than the standard, the descent from JEXIL is a slightly longer-than-average final distance of 5.6 NM to the missed approach point, followed by another 0.5 NM to the runway itself.

The profile view notes: “VGSI and descent angles not coincident (VGSI Angle 5.00/TCH 26).” This note, while common on profile views due to differences between approach glidepaths and settings of a PAPI or VASI, usually doesn’t have to account for descent angles this steep. Assuming you’ll be on a glidepath somewhere in between in visual conditions, you know you can make any adjustments easily after JEXIL if you want that steeper approach; it’s a 100-knot airplane that can easily slow to 70, even on descent.

More on briefing the RNAV-A: No circling north of the runway. However, it’s left traffic on both runways for VFR use, and you’ve reviewed the VFR traffic pattern. If this steeper approach leaves you too high on short final or something else isn’t matching up, or a bear rambles up and decides to check out the runway paint, the plan is to go around and line up for a left downwind to 8, maintaining TPA at 2564 feet until abeam of the threshold, flying the VFR traffic pattern. Here’s an interesting thought exercise for those equipped to fly this approach IFR: If you go around from the RNAV approach and fly the left downwind, and hadn’t cancelled, wouldn’t that be defined as “circling,” which is NA on that side?

No matter; for those equipped, there are still four options to prepare for the event of a balked landing: Cancel IFR on final to Runway 8, so you can use any circling method desired, including that VFR, left-hand pattern for another circuit around if that becomes necessary. Second, get cleared for a visual approach, which could allow you to fly the standard left traffic, multiple times if you need to. (Do give ATC a courtesy heads-up if that’s your go-around plan.) Or, remain IFR and if you go around, turn it into a circle-to-land by overflying Runway 8 and circling south.

The fourth choice (not requiring a reminder to ATC, but it doesn’t hurt to mention) is to fly the published missed: 4200, then climbing right turn to 5100 feet, then to WEVOR and hold. It’d reduce the workload of obstacle clearance and as WEVOR is the straight-in IF/IAF, it would set you up to fly the approach again. For your limited equipment, the first two options would be fine if the ceiling and visibility are high enough.

Technically, visual approaches require 1000-3, but you’d want it to be better. Will 2000 scattered work? That’s the forecast for the area and it’s 10 miles’ visibility. After a one-day wait, which is all the time you have without cancelling altogether, you take it.

You can always divert to lower elevations at Somerset, London, or further north if weather and terrain come too close. So you’ve got a backup approach with GPS for sure; that’s actually encouraged in the AIM guidance on visuals. How about adding underused radar vectors to a visual, also mentioned in the AIM as not only for procedures, but “to the traffic pattern for a visual approach.”

Given the conditions, the plan to cancel IFR before that six-mile final shifts to requesting vectors-to-a-visual, with a go-around plan to circle south back to Runway 8. The scattered clouds, though not a ceiling, are thick enough to obscure a view on the airport until after requesting (twice) a further descent to 3500 feet, getting just below the clouds and a bit past JEXIL.

It’s still more than five miles to fly to the runway, so once cleared for the visual you continue descending towards the MDA, with intentions to leave 2920 feet one mile out provided you’re visual and stable. But that’s where the wind seemed to shift and you find yourself with minimum power, full flaps and a shallower, not steeper, descent. It’s actually the terrain-related turbulence hinted at earlier, and now that circling plan comes into play.

So do all the caveats on visual approaches, per the AIM: “A visual approach is not an IAP and therefore has no missed approach segment. If a go around is necessary for any reason, aircraft operating at controlled airports will be issued an appropriate advisory/clearance/instruction by the tower. At uncontrolled airports, aircraft are expected to remain clear of clouds and complete a landing as soon as possible. If a landing cannot be accomplished, the aircraft is expected to remain clear of clouds and contact ATC as soon as possible for further clearance. Separation from other IFR aircraft will be maintained under these circumstances.”

Clear of clouds? Got that part down already, “Landing as soon as possible”? Working on it. They’re holding the airport for you. This time, the go-around-circling plan is to get back on the horn with ATC for a clearance to the alternate. The right downwind, you discover, works well to avoid the trees while adding extra altitude (back to 3500 feet, just below the clouds) is great for avoiding most of the turbulence until back on final, this time for a shorter, steeper approach before landing and finally cancelling. Treating the visual approach like a real procedure paid off, with plans for the first and second missed, vectors, minimum weather, and alternates. Could be a good way to plan a lot of visual approaches, which don’t get the go-around plans they deserve.

Elaine Kauh is a CFII in eastern Wisconsin. Visual approaches to her home airport are the only way to get in, and always include altitude checks over the water tower on the base leg.