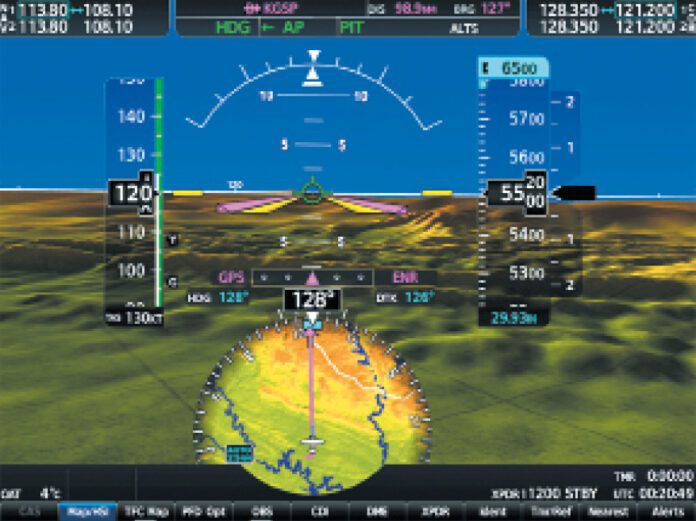 Recently we heard from a salty aviator having trouble flying his Aspen PFD even though he’s had it for years. Adding to his frustration, he can fly his legacy round-dial instruments accurately. He believes he’s not alone, and he’s right. What’s going on?

Superficially, you wouldn’t expect much difference between round dials and vertical tapes. A digital PFD is appealing because it’s clean and compact. The absence of boundaries between instruments eliminates the need for the eye to skip over at least two instrument edges before reaching the desired instrument. Your scan is easier, shorter, and less tiring.

While gauges and tapes present the same information, subtle differences can bedevil pilots transitioning to glass, especially airspeed and altitude. This article explains those differences, why round-dial pilots have trouble, and suggests remedies.

One advantage of round dials is an unintended result of its design, the “quick glance” feature.

Consider an analog clock. Envision any time you like, and you’ll automatically know how its hands should look. In the same way, your mind’s eye knows what looks right on the panel. Round-dial pilots can tell right from wrong from the corner of their eye. This subtle feature is intrinsic to round-dial instrument scans but is largely absent from linear tapes. No wonder some analog pilots struggle.

Digital tapes require matching a scale pointer with a bug or airspeed number. They show speed to the knot. You pay for this extra and sometimes unneeded accuracy by having to read rather than sense it. You can chase it when it’s off, then you might fixate on it, and your scan falters.

We need exact airspeeds for departure and arrival. En route, being within five or ten knots is good enough. If there were a reduced resolution mode to five knots, the airspeed would bounce less and minimize distraction. Another tool is to use the trend line, which can be very useful in precision flying. More on that in a moment.

Round-dial airspeed indicators employ the “quick glance” feature differently. All the pilot needs to do is keep the pointer in a particular space like in a slice of pie—a speed space. Like analog watches, pilots build speed space expectations that roughly match each phase of flight.

Round-dial pilots come to attach meaning to speed spaces, not numbers. A sideways glance at the ASI is enough to know whether the pointer’s in the right space.

Another round-dial ASI feature that supports visual matching is that its endpoints are always visible, providing complete airspeed context. Whether the pointer sits or moves, it’s always clear where the aircraft is in the speed envelope. The speed at which the needle moves shows trends automatically. These slight differences add to the difficulty of transitioning to glass.

In a tape, the scale slides while the pointer remains fixed, the opposite of a round gauge. A moving scale provides no inherent visual clue of the relationship of present airspeed to airspeed limits. Accordingly, at low speeds, displays use warning bars adjacent to the airspeed tape to provide speed cues. The tape typically turns white at 1.3 VS, amber below 1.2 VS, and red below 1.1 VS.

Airspeed reference marks or “bugs” further aid context on a tape display for stall, maximum operating speed, flap limit speeds, and the like. High-speed awareness cues can be amber or flashing amber as the aircraft nears VNE.

The speed tape offers a trend cue from the speed at which the tape is moving past the pointer. The desired scale window is 80 knots, close to that in the Aspen. A speed change makes the airspeed larger or smaller, but you must read it. A tape is less visually informative than a slice of pie uniquely angled against a circle in a unique direction.

All that said, pilots adapt to tapes, some quicker than others, especially those exposed to digital formats in other aspects of their lives. Maybe their digital watches help?

AC 25-11B tells us the ratio of total usable range to required resolution is 10 times that needed for airspeed or attitude. Secondly, losing one’s sense of altitude can be dangerous, even disastrous. The altimeter scale and markings must be sufficiently precise to allow altitude tracking in level flight, large enough to reinforce a pilot’s sense of altitude, and allow sufficient look-ahead room to anticipate and smoothly level-off.

A 2011 altimetry study at Purdue University involved three groups of eight subjects who were supposed to capture and maintain an altitude on a flight simulator. One group had no flight experience, another only round-dial experience, and a third had only vertical tape experience.

Analysis revealed that participants held altitude better with round dials but preferred the digital tape. The tape was more accurate, but trends were harder to detect. Most participants believed they performed better with the tape, but the vertical tape-only participants performed worse than the other groups.

Round airspeed and altitude gauges offer clues on trending, none of which exist in a glass display. Their absence can confuse a pilot with years of experience gauging the aircraft’s energy state using traditional round dials. As we’ve learned, tape displays do not show trends well. Six-pack pilots sometimes overlook the speed, altitude, and vertical rate trend lines. They show where the aircraft will be with a few seconds of look ahead into the future if inputs remain unchanged. 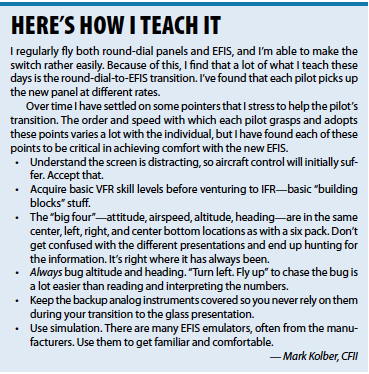 If able, remove unnecessary layers of PFD information, such as traffic, weather, and synthetic vision. Once able to fly under the hood with the bare necessities, add display enhancements one by one. Nothing says you must use all the automation you have.

The law of primacy says the first thing we learn sticks with us the most. Six-pack pilots must overcome this speed bump to learn new airspeed, altitude, and VSI readouts and a new turn coordinator presentation. Only the heading and attitude indicators are largely unchanged.

The panel’s form may vary, but its function remains the same. The same scan works, whether facing a PFD or a six-pack. A systematic scan resolves the chronic problem of fixating on one tape or the other. Since most PFD displays are compact, a pilot can scan left to right to read airspeed, attitude, and altitude in one sweep. Scan the HSI and start again.

Fellow contributor Elaine Kauh observed there seems to be a spectrum of ways pilots perceive the glass panel, from being overwhelmed by too much information, to fixating on a tape. Instructionally, this can be cured by requesting verbal callouts on airspeed, altitude, etc. Some pilots must re-learn how to scan. She has even had the pilot verbally cross-check the PFD with the backup instruments and then the other way to sharpen their scan.

Surprisingly, the round-gauge versus PFD contest results in a draw. It hardly matters. The aviation community has voted en masse for glass.