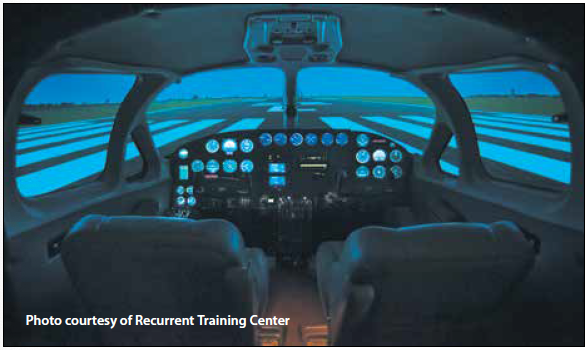 Since I’ve turned more pages in my personal calendar, my insurance required recurrent training increased from once in two years to every year. As much as I hate to admit it, the performance I demonstrated this year—although I was legally current and felt somewhat proficient—suggests that is a reasonable demand.

This year, I chose Recurrent Training Center. I’ve attended RTC before, but only in their original location outside Champagne, Illinois. RTC since opened a location in Odessa, Florida, outside Tampa. I wanted to compare the training in Florida.

Training at RTC’s original location was attractive primarily for the low price; I’d found the training a bit lacking, although acceptable in the final analysis. (See “Sim Training Centers” in November 2016.) Of course, they also provided the needed insurance sign off, so it checked that important box.

While RTC originally got its start as a budget training provider with materials that reflected that cost containment, ASE has changed RTC’s model and is positioning the company as a premium training provider, competing with companies like SIMCOM. This drive has resulted in a notable improvement in the training, having largely matured from somewhat amateurish to polished and professional. This was refreshing as I found the errors and inconsistencies in the previous material to detract from the training.

Originally, RTC mainly offered simulator training to general aviation piston pilots. While RTC under ASE still serves that market, they’ve continued the addition of more advanced aircraft that began in Illinois. At present, RTC in Florida offers training for aircraft ranging from Cessna and Piper singles, Cirrus, Piper twins, the Twin Cessnas, and up to King Airs (A90 to the B200), and the Pilatus PC-12. These are all static (non–motion) sims, but with large outside graphics that easily get the job done. However, ASE is currently building several Level D simulators (real full motion, in which you could take a checkride) presumably for RTC after significant FAA certification and training program review efforts.

The original RTC in Illinois set a high bar for ease and flexibility of booking and helpful logistics. RTC in Florida meets that standard with very helpful and friendly folks who want nothing more than for you to have a pleasant training event.

I attended a two-day Cessna 340 recurrent training at RTC in Florida, although it only took us a day and a half. That included about six to seven hours in the sim. More time was available had I needed or wanted it, but we covered all the essentials in that time.

My instructor was Mr. Skip Borders, a highly experienced and affable pilot with a long list of credentials that included a lot of Twin Cessna time, but none specifically in a 340. He, however, knew the plane sufficiently to guide me through the exercises. Skip and I spent most of the first morning just getting to know each other. We each talked about our flying experience, liberally sprinkled with war stories.

As you (should) know by now, there are multiple ways to achieve the every-two-years flight review required by 61.56. One lesser-known way is to complete a phase in the WINGS program. This path is offered by some of the simulator training centers, but not all. For example, last year I attended National Flight Simulator (NFS) in Manchester, New Hampshire, and their otherwise excellent program did not offer sufficient WINGS credit to accomplish a flight review.

RTC does; their path includes significant on-line self-study material to be completed before attending. I completed that and, combined with the classroom and simulator work, I left with a WINGS phase completed and the accompanying flight review credit.

As Skip and I got started, I mentioned that I was pretty comfortable with the aircraft’s systems. I am, but I expected some review. The actual systems review consisted of a few broad discussions and homework of a couple of workbooks/quizzes. We spent little time interactively reviewing aircraft systems, although I was given the opportunity to ask questions. If I go to RTC again, I’ll request a thorough systems review.

As our aircraft get more and more technologically advanced, I’ve long complained that we need simulators that emulate our aircraft as equipped. Unfortunately, with the current state of the industry, this is impossible. So, most sim training facilities use completely generic sims (as did NFS last year). To my knowledge, only RTC and SIMCOM have a sim that’s at least in the same family of aircraft (for me, Twin Cessnas), but you just can’t have anything resembling your own panel because after 40+ years since manufacture, no two panels are the same.

Interestingly, the original RTC in Illinois did have an actual Cessna 340 simulator they used for Twin Cessna training. Physically it was great, offering a faithful representation of the aircraft. However it had enough performance quirks to be unrealistic. With the move to Florida, that sim was retired in favor of a new Cessna 414 sim.

The panel layout is similar enough to be comfortable to a 340 pilot, but the switches and circuit breakers are in a completely different arrangement, and it’s much heavier on the controls. The differing switch and CB arrangement made abnormals—ranging from a little ice to runaway electric trim—quite a challenge as I hunted for the right switch or circuit breaker.

My point with all this is to explain that unless your aircraft is relatively new and not (yet) modified, you’re not likely to have a sim that feels familiar. For example, you can find a faithful Cirrus sim, but as I have learned, you won’t find a faithful Twin Cessna sim.

What is the implication of this? I’ll use my experience there at RTC to answer. The sim I flew had a pair of GNS 430s. Outside of a few sims, I’ve never flown behind a GNS. It also had round dials compared to my Garmin G500 EFIS. An EFIS presents much of the same information, but operation can be quite different. So, combine flying unfamiliar approaches, in an “airplane” that had unfamiliar handling with switches and circuit breakers in unfamiliar locations, navigation that was unfamiliar, and unfamiliar “buttonology” and, well, my performance was as subpar as you’d expect. I used a lot of time for familiarization and only partly succeeded. Consequently, the exercises involving abnormals in particular were of limited value.

All those considerations notwithstanding, large numbers of our fleet are equipped with original round gauges, most with a GNS 430 added years ago. Most modern simulators—including the C414 I flew at RTC—have a similar configuration, so you could be far more familiar and comfortable than I was.

My ongoing conclusion with simulators is that once you learn to operate the sim, which can take some time, you can use it to build general procedural proficiency, but that might not transfer well to flying your particular aircraft.

Let me add that this is a general indictment of the simulator industry and the FAA certification standards, but is not a criticism of any particular simulator training facility, particularly RTC who comes closer to my airplane than most. Also, after discussion with James Clary, who wears hats for both RTC and parent ASE, they’re exploring being able to at least load different aerodynamics into the 414 sim to at least fly like other members of the family they train in it. That would be a good move.

If I were to return to RTC I’d request much more of an interactive systems review over the self-study Q&A that I might have inadvertently suggested was all I needed or wanted. The sim exercises were well structured, especially the realistic complete flight (“line-oriented flight training” scenario) that included failures and other issues, but my discomfort with the sim was restrictive. I’d suggest that anyone flying an aircraft that was upgraded—not originally built—with EFIS to gain familiarity with a round-dial panel sporting a GNS navigator before heading to any sim training facility. Finally, I’ll applaud RTC for utilizing the WINGS program to include flight review credit with the recurrent training.