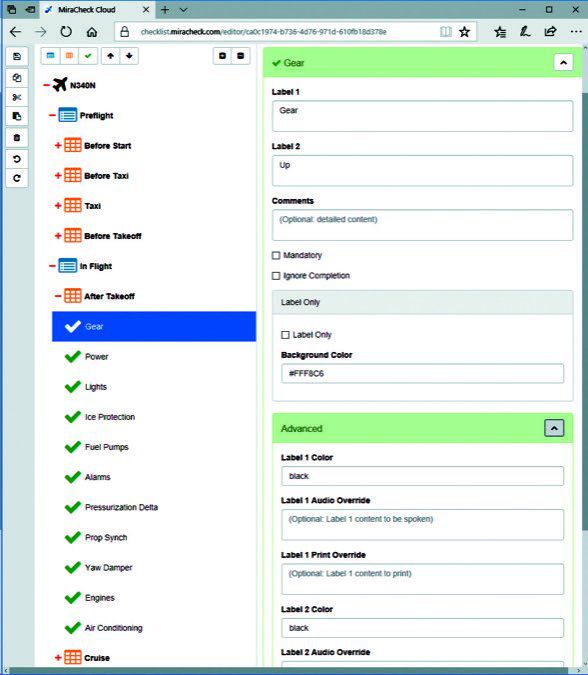 Flying with a professional copilot spoiled me. Just calling for a checklist and having it spoon fed to me with no effort or distraction is as good as it gets. So, when I resumed flying GA—no copilot—I hunted for the perfect checklist app. I didn’t find it. Until now.

I diligently used my checklist only on the ground. My use was sporadic in the air because it took too much time and was a distraction, making my flying potentially more dangerous—not safer. I found that the same is true for many pilots.

There are many checklist apps and panel-mount avionics with checklists. These are little better than paper since they use the same paradigm: find the list you want, read each item and confirm it’s in the state you want. Paper is quicker.

Ideally we’d all have a copilot to read us the challenge to which we’d respond. We wouldn’t have to grab the paper checklist or call it up on some device, select the right section, and read each item, using mindshare better spent managing the airplane. I wanted a checklist app that read each item to me and listened for my verbal response, just like a good copilot.

In this way you use the classic challenge-response format that still stimulates thought, but is much less distracting since you don’t have to read it or divert your attention to some device.

As I was searching for just the right app, I wrote an article for sister publication Aviation Consumer that appeared in August 2016. I was going to also write an article to appear here, but I didn’t find any apps to be of sufficient merit. After all, IFR is about instrument flight and we only run a product review when we find something compelling.

Soon after my article appeared, Jeff Bonasso, a developer who was writing a checklist app, contacted me. I was skeptical, having sifted through dozens of apps that all fell far short. Nonetheless, Jeff seemed sincere so I eventually responded.

Jeff wanted to tailor his app to work as closely to my ideal as was technologically possible. He requested my assistance, both with the requirements and testing. I agreed. So, in full disclosure, I do have an interest in the success of this app for reasons of my participation, but I have no financial interest whatsoever.

The checklist apps I’ve seen mostly seem like they’re built by programmers who are (usually novice) pilots, rather than accomplished pilots who can program. While I’ve concluded that Jeff is a first-class programmer, his MiraCheck impresses me most in its versatility, its usability and its attention to the kind of details pilots need.

While MiraCheck has full functionality on your iPad or iPhone, Jeff’s company, Miralou Aero, has a server you access via the web. Also accessible from within the app, the web site allows easier editing and creation of checklists and better checklist management than just the app. It also keeps an amazingly detailed history of nearly everything you do on the app.

There are multiple ways to get a checklist. First, you can write your own with the logical and robust editor or by uploading a spreadsheet. There’s a MiraCheck community where users share their checklists. (Use caution until you vet these.) Miralou Aero has uploaded full POHs for many aircraft; all of these can get you started. Finally, CheckMate’s commercial checklists are also available.

Once you start MiraCheck and select a checklist, you can dive right in. But don’t overlook the many configuration choices. These aren’t just window dressing; a lot of thought has gone into these. For example, the default layout puts phases-of-flight at the bottom. Press one and the individual lists for that phase show across the top, with each list below its header.

The active list scrolls so that the current item is centered on the left. This way, you can keep your finger or thumb in the same place to acknowledge each item as it scrolls up. Similarly, there’s a Checkbar on the right side you can touch to acknowledge each item. You can even turn the entire screen into a big checkbox for turbulence, or control the app with an Apple Watch (best during preflight).

MiraCheck in normal text mode is the best, most capable and sophisticated checklist app I’ve seen. Add voice and, well, it far outshines everything else.

It Talks; It Listens

MiraCheck will operate silently, using on-screen navigation and touching the screen to acknowledge an item. However, to me its real strength is working audibly. You’ll have to hook it up to a quality headset (Bluetooth or wires, if compatible). Some audio panels also offer Bluetooth, but the added processing currently reduces speech-recognition acuity. This is on the roadmap for improvement.

Each checklist, phase of flight, individual list and item can all be read aloud by MiraCheck. It can also be set to listen for the desired response. In fact, once you get things set up and started, you could toss your iPad in the back seat and use MiraCheck unseen and hands off.

For just a small idea of the thinking that’s gone into MiraCheck, everything it says can be either read from the item text or you can enter an alternate text just to be read instead. For example, I use the checklist for my Cessna 340. When it starts, MiraCheck will say, “Cessna three hundred forty.” But, I’ve set “Cessna three forty” as the alternate text to be read.

Most checklist programs follow an item-state-“Check” format like, “Gear, Up, ‘Check’.” But the real world uses a challenge/response (“Gear”—”Up”) with many possible responses, like “on,” “off,” “up,” “down,” “set,” “complete,” etc. MiraCheck by default will use “Check” as the response, but you can specify any alternate response that then applies to talking only (it talks but you touch to respond), or what I call full hands-free dialog mode where the needed state is your response.

In full dialog mode it accepts more than just challenge responses. In fact, most basic functionality is accessible by voice command. You can call for, pause, play or reset any list, category or phase of flight. For example say, “Mira, Engine Failure” and it’ll read the engine failure list. While critical for emergencies, this capability is especially useful in training.

Lists follow a logical progression: Before Takeoff, Takeoff, Climb, etc. Mira sequences through these in order. But if you’re doing pattern work where you go from takeoff to climb to before landing to landing, you can directly access any list from the screen, or you can just call for the list you want (“Mira, Takeoff”).

Fully covering the depth, power and versatility of MiraCheck Copilot would take many pages. I’ll mention just a few more things: Lists can wait for a response to each item or read straight through. You can tie a timer to any item(s). Multitasking in IOS 10 and beyond lets you overlay MiraCheck with your EFB app. There’s storage and history of nearly everything you’ve done. You can add a note to any item as you go through a list (useful for discrepancies or just a reminder to edit the checklist). You can print a nicely formatted version of your custom checklist.

I urge you to just try MiraCheck. You’ll find that it’s an incredibly well-designed and executed program that will do what you want, the way you want.

You can download MiraCheck Copilot for free from the App Store. The free version is limited to basic functionality on a single device, but it includes a brief free trial of the Pro version. The Standard version costs $29.99, can be loaded on three devices, and includes many of the advanced features, but no audio or on-line history. The full Pro version that I use costs either $4.99 a month, $49.99 a year, or $129.99 for life.

One final note: MiraCheck is so powerful, so versatile, that there’s an inertia factor to overcome the initial effort to use it in the air. Force yourself through that and you’ll wonder how you ever got along without it.

Frank Bowlin is a confessed gadget geek, but this is one gadget that increases his safety of flight by improved checklist use.