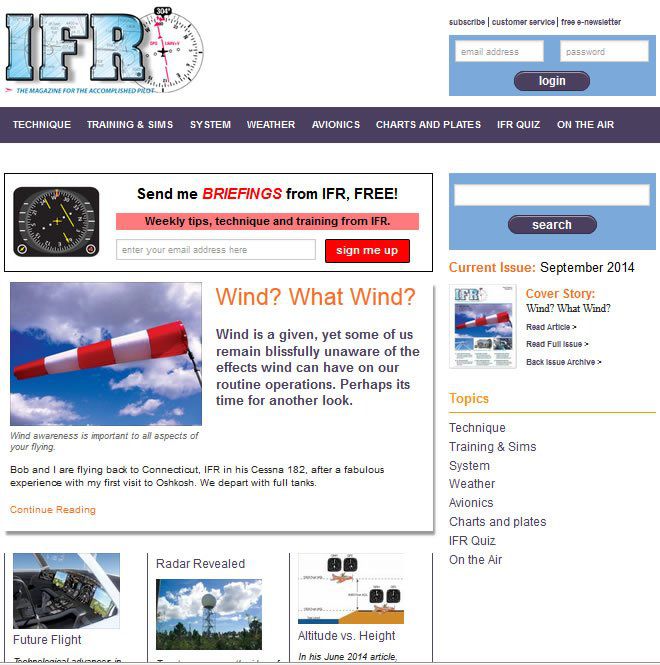 Toward the end of his excellent article, “Gaming the System” in the August issue, Mr. Kramer talks of cancelling IFR when the frequency is busy and you have gone into VFR conditions. I have always tried to do this to relieve ATC of unnecessary responsibilities.

However, this may be a little different in Bravo airspace. On a westbound flight through Washington’s Class B, I cancelled IFR after passing Baltimore and many of the buildups. The controller thanked me, replying, “Maintain VFR, report any changes in course or altitude.” A few minutes later I had more buildups in front of me. I reported it, and worked my way through. I have always wondered under circumstances like this if I had returned to IFR what the proper communications would have been in the Bravo air space.

If you’re safely “in the system” don’t leave the safety of the system unless you’re certain you can maintain that safety on your own. In other words, don’t cancel IFR unless you’re highly confident you won’t need it again until after your upcoming landing. If you do need IFR again, you’ve created extra work instead of reducing controller workload.

Everybody makes mistakes; do what you can to prevent them. You courteously canceled IFR while in Class B and the controller accepted that, but overlooked your need for a Class B clearance. It happens. You might have minimized that possibility by canceling IFR with a Class B clearance request: “If you can give me a Class Bravo clearance, I can cancel IFR.”

Given your VFR Class B clearance, you now must only remain clear of clouds for VMC. If you can’t do that on your present altitude and/or heading clearance, simply say so: “Request right 10 degrees to remain in VMC.” You might not get what you asked for, but the controller will offer an alternative.

If you later need the IFR clearance, just ask for it as you would for any pop-up clearance. Be prepared for some controller frustration, though, for the extra work. Plus it can take some time, so don’t ask for IFR when you’re mere seconds from entering the clouds.

The demands of instrument flight today require a relatively high level of technical expertise. Most of us active instrument pilots have and use tablets and we’d sure like to read our favorite magazine (IFR if you need a hint) on the tablets as well.

Of course, having that electronic version opens up other options like searchable archives. Isn’t it time to join the 21st century for electronic publishing?

For years we’ve occasionally responded to these messages by saying something like, “Although the economics don’t currently support an electronic version and accessible archives of the magazine, it’s not a dead topic and we continue to revisit it occasionally.”

That wasn’t just a sprinkling of happy dust, but did accurately describe the situation. Revisit we did, and we’re pleased to say that, yes, we have indeed updated our web page to meet the common requests. See http://www.ifr-magazine.com/, and thanks for your patience.

My favorite waypoint was DRUNK to the south of Boston. That seems to have fallen out of favor, as it was recently replaced with DUNKK, with no publicity whatsoever. I have several stored flight plans with DRUNK as a waypoint but Flightsoft does not automatically update them. It gives me an error message instead.

Fixes in flight plans are referenced by name. The flight plan might also store fix coordinates, but it would be a risky proposition for a program or a navigator to simply assume a new fix name in the same place is, indeed, the same fix renamed.

Moved fixes of the same name, however, are handled differently by different software. Some just take the new location, while others look at how far it moved and throw an error if the fix moved significantly. When viewed from the larger perspective of potential dangers, these seem to be reasonable choices.

On a recent trip to Oshkosh, I was briefed by FSS over the telephone about persistent morning fog over central Wisconsin. I decided to file IFR from Eau Claire to Stevens Point to get over the reported fog area. I filed as /A and departed in VFR conditions.

Over EAU I picked up the flight plan and proceeded east on V55. About midway to STE I tried to tune in the STE VOR but could not pick it up. I questioned Center and was told that the VOR was decommissioned. Fortunately I was in VFR conditions and never saw any of the reported fog. The current AeroNav charts show an ILS and three VOR approaches using the STE VOR.

In a later conversation with FSS, I was told that the STE VOR was shut down in November 2012. I find this troubling. Are briefings and charts advisory only? How can you protect yourself against poor, incomplete or wrong information?

That is interesting. It looks like the briefer missed a NOTAM. The current NOTAMs do indicate that the STE VOR has been out since November of 2012.

Apparently they have hopes of fixing it at some point, since it is unserviceable until further notice (U/S UFN) instead of permanent (PERM). That would also explain why the VOR approaches continue to be published. However, they can’t be flown without an operational VOR (since it’s required to fly the final segment). The segment of V55 leading to STE could be flown using only GPS, which is why it’s still published. The ILS approach at STE would normally require an operational VOR, since the missed approach holding pattern is over the VOR. However, with the VOR out of service, the only way to identify the holding fix is with GPS, hence the FDC NOTAM. That FDC NOTAM currently expires on October 18th, so maybe that’s when they are hoping to have the VOR back in service.

Interesting how one tiny little NOTAM changes the whole operational flow around that airport. Briefings are not just advisory only, but it appears that the briefer simply+ missed the NOTAM. It’s still your butt on the line though. Stuff like this is why I always prefer to brief myself (and take a printed copy of applicable NOTAMs with me).

I have recently received the following type of clearance when I was approaching a terminal environment:

“Cleared direct XYZ (an IAF). Cross XYZ at or above 3000 feet. Cleared for the approach.” If I am above 3000 and am not on a published part of the approach, is this a clearance to begin an immediate descent to 3000, or do I need to receive a specific clearance to descend? It seems that they want me to descend, but I would think that they would need to give me that clearance. The most recent clearance came in an area with an MSA of 6,000 and it was not a TAA procedure.

It’s not only safe, it’s routine. The answer is in the clearance. Let’s take it apart.

“Cleared direct XYZ.” OK, you know you’ve been given a potentially off-route clearance, so it’s expected for you to indeed, proceed directly to that fix from your present position. Since the route to that fix isn’t a published route, the controller assumes responsibility for obstruction clearance. That’s what he does next.

“Cross XYZ at or above 3000 feet.” This is the same as a pilot discretion descent. The controller has told you that he doesn’t really care what altitude you use, as long as you 1) don’t climb and 2) don’t descend below 3000 feet until crossing XYZ. Do what you want, although practically speaking, it’s generally best for the approach if you cross that fix at the minimum permitted altitude.

“Cleared for the (…?) approach.” If you were given a specific approach, then once you’re established on the approach, with positive navigation course guidance from the primary navigation source for that segment of the approach, you’re bound by the altitudes on the approach. If you weren’t given a specific approach, you’re free to fly whatever approach you want, but XYZ must be a fix on a charted segment of your chosen approach or this whole thing won’t work. All the other restrictions remain.

MSAs are broadly charted areas. The controller has far more detailed capabilities in which a descent to 3000 with an MSA of 6000 is not at all surprising.