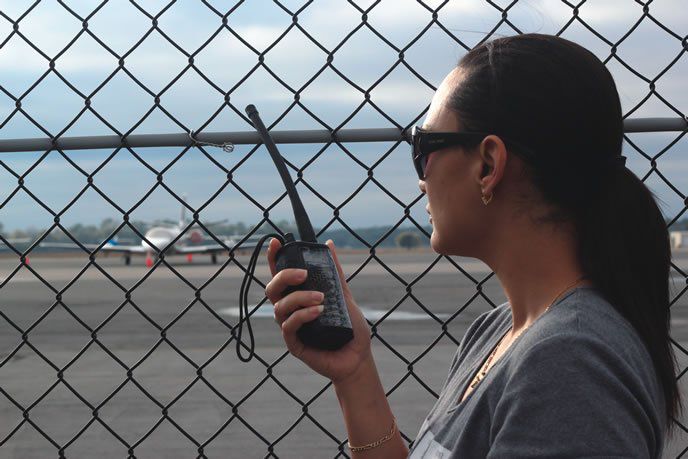 Our main airport has several flight schools and they keep us air traffic controllers quite busy. It’s easy to tell when they get a new batch of students—those first radio calls for VFR clearances and eventual taxi and takeoff are usually halting, uncertain affairs, dragging on as students parrot their instructors without truly understanding the lingo. It can be almost as painful for us as for the student.

Clumsy as those first steps may be, the subsequent journey will hopefully lead each student to true proficiency on the radios. It’s not an easy road at times, especially once each advances into instrument training. The amount of radio communication and multitasking may be overwhelming at first.

It’s tougher for some students than others, but getting comfortable on the radios is just as crucial for instrument flying as polishing holding procedures and shooting approaches. The aviation business, after all, is focused on safety and communication. The two go hand in hand within the IFR air traffic control environment.

Let’s explore what kind of lessons and techniques make for success on the frequencies.

Nothing Special
First, we must discuss a basic issue: mic fright. For a new pilot, getting on a frequency full of airline and corporate traffic being wrangled by a fast-talking controller can be intimidating. Those characters can sound smooth, confident, and even cocky. It’s a good bet, though, that they didn’t start that way. They were probably just as nervous getting on the frequency for the first time.

Mic fright and other kinds of performance anxiety are often caused by the misguided assumption that the other party is somehow more important than you. If your imagination is allowed to feed on that notion, it can run off with your confidence.

Before I joined the ATC work force several U.S. presidents ago, I imagined controllers as intense, well-dressed middle-aged folks working in ivory towers and fortified radar rooms. Here I was, just a lowly peasant in a Cessna, beating up their traffic pattern or requesting flight following. Putting controllers on an imagined pedestal made my dealings with ATC shakier than I would have liked.

Then I got hired and saw behind the curtain. The work may be intense at times, but the people are casual. During football season, we’re wearing our team jerseys and caps. In the warmer months, we’re working in shorts, T-shirts, and sandals. In between traffic rushes, we’re chatting sports, video games, food, movies, hobbies and love lives. It’s nothing you wouldn’t find in a typical office environment with a bit more casual dress code.

The steady-sounding controller you’re talking to isn’t a Marvel superhero. Perhaps he’s Bob from Oregon, with two kids, a wife, and a Chihuahua named Taco. That smooth airline captain you just overheard could be Lynette from San Francisco, who likes backpacking vacations and creating watercolor paintings. They’re all just regular folks who happen to be trained to do a very specific job, and tend to love doing it.

What’s stopping you from sounding like Bob or Lynette? Nothing, really. Sure, they may have some more radio experience than you, but the frequency is a level playing field. Approach your next radio transmission with the confidence of knowing you’ve got just as much right to be on there as they do. You’re all just regular people, playing with an extraordinary thing: aviation.

Graceful Recovery
What if you get on that freq and make a mistake? Botching a transmission can be pretty mortifying to the new pilot. Perhaps you’ve thought afterwards, “Now everyone for 200 miles just heard me make a jackass out of myself.”

Don’t sweat it. Everyone fouls the frequency occasionally. That’s part of the learning process, as you try to reconcile both what you want to say and how you plan to accomplish the task being discussed.

Goofups are constant on both sides of the frequency and at all pay grades. One morning, I cleared a heavy Airbus A300 for takeoff. The pilot responded in a deep, monotone AirlineCaptainVoice(TM). “Runway 9, fly runway heading, clear—SQUACK!” His voice cracked like a twelve year old boy’s. He tried again. “Runway 9, fly run—SQUACK!” The other pilot keyed up, laughing. “Sorry about,” he said. “My little buddy’s just starting puberty. Runway heading, here we go.”

That was the crew of a 378,000-pound Airbus with hundreds of passengers aboard. If it can happen to them, it can happen to anyone. I have sneezed in the middle of issuing an IFR clearance. I’ve rolled a heavy chair over my pinky toe mid-transmission. (I finished the call with my voice about an octave higher than where it started.) One day, a congested nose gave me a bad speech impediment. “Dovember Three Seved Dine, fly heading zero seved zero.”

Stuff happens. It’s out there. It’s on the recordings. There’s not much one can do about it. Like the Airbus crew, just laugh it off, keep going, and do it better the next time. Or, if it’s good enough, send it in to our editor and he’ll memorialize it for you on the last page so everybody can laugh with (or at) you.

Readback
If you mess up a readback, and ATC has to correct you, remember the controller’s job description: ensure the safe, orderly, and efficient flow of aircraft. We need to verify that you’re following our instructions so you don’t conflict with other aircraft.

Lately, I’ve noticed pilots getting lax with mandatory runway hold short readbacks. Really lax. If a controller tells you to hold short of a runway, you must read back that instruction. That’s non-negotiable, and is specifically mentioned in 4-3-18 (7) of the AIM. “ATC is required to obtain a readback from the pilot of all runway hold short instructions.”

No one likes being corrected. More often than not, when we have to request a hold-short readback, some pilots cop an attitude. They seem to be forgetting the end game here is safety. As a pilot, you’re responsible for your well-being and that of anyone else aboard your aircraft. Proper readbacks—and ensuring compliance with those instructions—are key to the ATC-pilot team initiative preventing you from becoming a runway incursion statistic or, worse, an accident statistic.

Even airline pilots sometimes forget that. Hop on YouTube and search for “Delta Captain Happy.” In the summer of 2014, a ground controller at Atlanta Hartsfield issued taxi instructions to a Delta airlines aircraft. The pilot took the wrong route. The controller calmly corrected him. The pilot lashed out with a vicious—and unintentionally comical—tirade, which escalated quickly until another, unidentified pilot put “Captain Happy” in his place. The exchange was immortalized by LiveATC.net and made the national news.

Don’t be “Captain Happy.” If you get corrected, so what? That just shows ATC is doing its job. Just give us the readback so we can move on to another aircraft. It’s not at all personal. If you comply with the instructions, five minutes later the controller probably won’t even recall the exchange. Pilots who don’t read back and don’t comply are the ones who get remembered.

Here are some radio techniques I learned as a controller that have helped me pare back my excessive word vomit. All of these equally apply to pilots.

Don’t think on frequency. When you key up the mic, you should already know exactly what you’re requesting. Dealing with an indecisive pilot is akin to being trapped at a fast food drive through behind someone who can’t figure out what they want. It’s frustrating and time-consuming. The worst offenders are those who change their mind constantly, forcing ATC to make a new plan each time.

Have a question? Ask it. With my own two eyes, I have seen two frightening near mid-air collisions occur because a pilot misheard an ATC instruction. After each incident, when questioned, each pilot said, “I thought the controller’s instructions sounded weird, but I didn’t want to question them.”

When a pilot’s intentions are unclear, I have zero problem telling him, “Say again your request.” Likewise, I fully expect any pilot to question me if he didn’t understand my instructions. Your safety and that of aircraft around you relies on the accurate communication and receipt of instructions. Don’t let there be dead air on a frequency recording in place of a question that may have prevented a dangerous incident.

Trim the Fat. One of my first ATC instructors leaned on me about my unnecessary pronoun use. “Traffic at your one o’clock.” “You are cleared for the ILS Runway 33 approach.” “Turn 20 degrees to your left.” He logged each in a notepad. The first day, he filled up a page. The next, a half page. After a week, my river of pronouns had almost dried up.

State your intentions to ATC with the minimum words possible. You’re not having a personal conversation with the controller. You’re telling the controller what you’re doing and what you want. “Cessna 23AQ requests two turns in holding, followed by the ILS 36.” Compare that to: “This is Cessna 23AQ, and we’d like to do a couple of turns in holding, and then we’d like to shoot the ILS to Runway 36.” Both convey the message. The first one sounds more professional and more efficiently uses the limited radio time.

Oh, and always (always) include your call sign in every transmission.

Finding your footing on the radios early can help you make serious strides later on in your flying career. Sure, you may encounter a few hurdles here and there, but with confidence and efficiency, you’ll be talking like a pro. Just remember: You belong on that frequency with everyone else.

Tarrance Kramer keeps his transmissions clean and efficient while working traffic…unless a P-51 Mustang enters his pattern. The warbird fan in him just won’t be restrained and he’s forced to chat with the pilot.