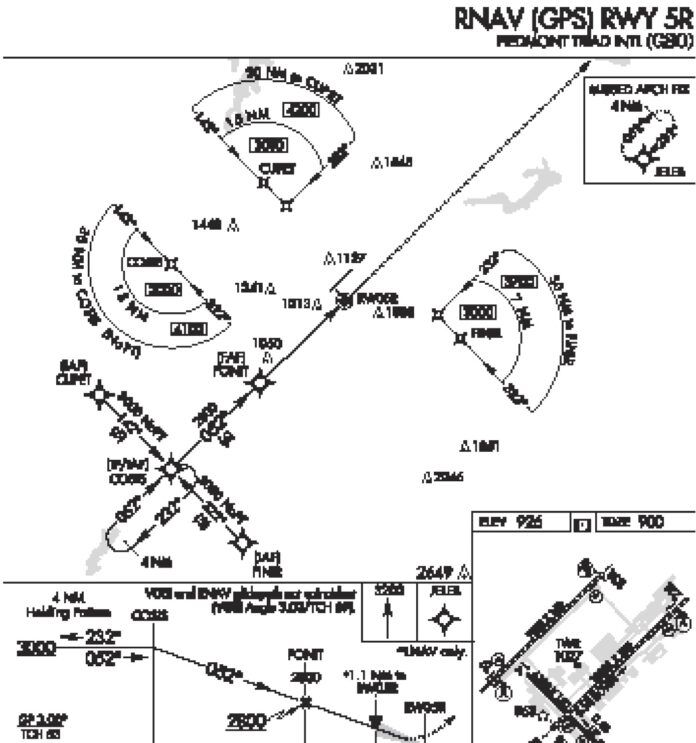 Having departed from Pompano Beach, Florida, we’re going to Greensboro, North Carolina, to visit family. The winds at Greensboro’s Piedmont-Triad International (KGSO) are northerly and the ATIS says we should expect the ILS 5R approach. All else being equal, we prefer GPS and LPV to localizer and glideslope. We ask for the RNAV approach to the same runway and the friendly KGSO controllers are happy to accommodate. Cruising along at an assigned altitude of 6000 feet MSL we hear, “Two five miles from COSIS. Direct COSIS. Cleared RNAV Five Right approach.” When may (should) we descend and to what altitude?

Two interrelated principles give us the answer. First, hearing “cleared for the approach,” permits us to descend from our last assigned altitude as soon as we are on a published route (unless we are assigned an altitude to maintain). Second, nothing but the words “cleared for the approach” allows us to descend on our own initiative from our last assigned altitude. These are simple statements that can easily be misunderstood, leading to possible trouble.

One source of confusion is the way the rule is often stated. Once cleared for the approach, we are authorized to descend on a “published segment of the approach.” That’s true but “of the approach” only tells part of the story. The regulation, §91.175, tells the full story. As its title indicates, this reg is a group of rules for Taking off and Landing under IFR. It’s a long section that includes takeoff minimums, obstacle departure procedures, procedure turns, the visual requirements to descend from the MDA, and other rules. Way down toward the bottom we find paragraph (i).

That paragraph, §91.175(i), tells us some important things. Until we hear the magic words, “cleared for the approach,” we must maintain our last assigned altitude. Instructions to proceed direct to a fix or join a segment of an approach, including “intercept the final approach course,” are lateral instructions only. They are not permission to descend. That’s important to remember.

Some GPS units—and the autopilots they direct—automatically sequence both laterally and vertically when encountering a segment of an approach. Fortunately, the “APR” button is what tells many autopilots it’s time to descend. Avoiding the single most common pilot deviation—busting altitude—is a good reason for the common practice of changing to APR mode only upon hearing “cleared for the approach.”

Once we do hear the words, “cleared for the approach” and we are established on a published route, we may descend to the minimum altitude for that route without any further instructions from ATC.

FAA Order 7110.65 (often referred to colloquially as the “Point 65”) is the official ATC manual. It is not mandatory reading for pilots, but it can be very useful for understanding how the NAS and ATC operate. The Point 65 echoes the regulation, the AIM (and other guidance documents such as the Instrument Procedures Handbook). When they vector us, “The altitude assigned must assure IFR obstruction clearance from the point at which the approach clearance is issued until established on a segment of a published route or instrument approach procedure” (emphasis added).

Will we actually hear the words “…until established on a published segment?” The ATC manual doesn’t use those words verbatim in any of its phraseology examples. Plus, controllers, like everyone else, are creatures of habit.

Accordingly, we are more likely to be assigned an altitude to maintain until a specific segment rather than a generic “published segment.” Nevertheless, instrument pilots report having heard “until established on a published segment” and the only slightly different “until established on the approach.” More importantly, there are a number of variations on the theme of what we might call implicit descent clearances, some of which I do expect to hear more often as RNAV continues to both supplement and supplant ground-based navaids.

What Is A Published Segment?

What do we mean by “published segments?” Any charted route qualifies. A “route,” charted or not, has three essential features: a location, a direction, and an altitude. We just looked at the common PTAC (position, turn, altitude, clearance) instruction for the last vector to the final approach course. It has all three.

Another common example of a route in the approach environment is a vector or instruction to proceed to a waypoint on the approach. The Point 65 gives this example. “Seven miles from FORRE, cleared direct FORRE, cross FORRE at or above four thousand, cleared RNAV Runway one eight approach.” Again, we have all three elements: location, direction, and altitude. 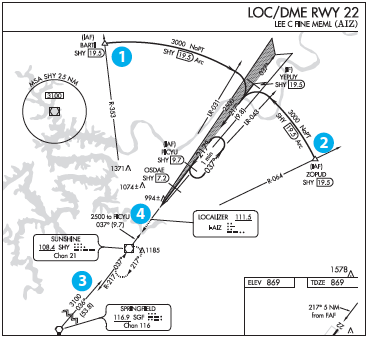 Now, let’s turn to charted routes. We will start with an old-school approach, the LOC DME Rwy 22 into Lee C. Fine Memorial in Kaiser/ Lake Ozark, Missouri (KAIZ). Look at the plan view. Leaving aside the intermediate and final approach segments, we can see four published routes. Two DME arcs, one from BARTI northwest of the airport (1 in the graphic) and one from ZOPUD to the northeast (2). An instruction to join the arc coupled with “cleared for the approach” permits us to descend to 3000 feet once established on the arc without the need for an altitude instruction.

Toward the bottom of the plan view we find two more published routes—two “feeders.” Feeders are off-airway routes used to navigate from the en-route airway structure to an IAF. The entire 53.8 NM feeder from Springfield (SGF) to Sunshine VOR (SHY) (3) is a transition with a minimum altitude of 3100 feet. Once reaching Sunshine, we have a 9.7 NM feeder from SHY to the IAF at PICYU (4) with a minimum altitude of 2500 feet. Merging them together, proceeding toward SGF from the south, an instruction to “maintain 5000 until Springfield, cleared approach,” allows us to descend to 3100 feet after crossing SGF and to 2500 feet after crossing SHY on the way to the hold-in-lieu at PICYU.

But wait! As they say, there’s more! There are published routes that are not on the approach chart. The SHY 353 and 064 radials shown on the approach chart are not navigable published segments. They define the location of the two initial approach fixes and show a direction, but they lack an element of a published route—an altitude. So, how do we get to the arc? It is almost a truism that we can answer some of the trickiest questions about approaches by looking at the en-route chart. Consider one of the arc IAFs, ZOPUD.

Note the consistency between the en-route and approach charts. There is no airway segment from SHY to ZOPUD. (There is also no airway from Springfield to Sunshine, the reason for the feeder discussed earlier.) But ZOPUD is on a published route, V234. East of ZOPUD and westbound on V234 at 5000 feet, an instruction such as “10 miles from ZOPUD, cleared Localizer DME Runway 22 approach” would permit the pilot to immediately descend to 3200 feet (the MEA on V234) to join the arc.

In the new world of performance based navigation, we aren’t bound by airways. But the same “when may I descend” principles apply. Let’s look at some of the special considerations presented by TAAs, Terminal Arrival Areas.

This returns us to our initial KGSO RNAV RWY 5R hypothetical. Northbound at 6000 MSL, we hear, “Twenty-five miles from COSIS. Direct COSIS. Cleared RNAV Five Right approach.” When and how far to descend? A TAA is, to use the AIM’s words, a “published route, for which a lower altitude is published on the chart,” It is a type of transition route. We might even think of it as a feeder covering a wider area. When we receive the approach clearance, all three prongs of §91.175(i) have been met. We’re on a charted route where a lower altitude is published. We’ve been cleared for the approach. ATC hasn’t assigned a different altitude. Thus, we may immediately descend to 4100 feet. Once within 13 NM of COSIS, we may descend to 3000 feet where we remain until we are on the intermediate approach segment between COSIS and FONIT, the FAF.

We may well be more likely to hear one of the two more familiar Point 65 examples of a TAA approach clearance. Translated to our RNAV 5R approach into Greensboro, one is, “Cross COSIS at or above 3000. Cleared RNAV Five Right approach.” The other identifies the TAA as the segment of the procedure triggering a change. “Cleared direct COSIS. Maintain at or above six thousand until entering the TAA. Cleared RNAV Runway Five Right Approach.”

Approach clearances from a remote point have existed for a long time but GPS has created more opportunities for them. Terminal Arrival Areas, whether or not in the shape of a “T” with a central IAF/IF and two perpendicular extensions, allow controllers to clear aircraft for approaches earlier. Also consider that an RNAV STAR that ends at an approach IAF might lead to an instruction to “Descend via the STAR. Cleared approach.”

Due to the different permutations of the instructions, we need to understand the basic published route-plus-approach-clearance formula. With our new avionics, it is ultimately a workload saver. For the pilot, loading the procedure and tapping the VNV and APR buttons 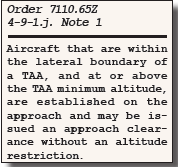 lets our autopilot do all the grunt work. For the controller, clearing a pilot to a T-configuration IAF for an approach is less workload than giving downwind, crosswind, and intercept vectors to final. It’s no surprise we are seeing more TAAs, even on ILS approaches. More pilots asking for “remote” clearances and more controllers offering them, with and without stated altitude instructions. It’s important to know what to expect and what to do.

CFII and aviation lawyer Mark Kolber likes direct clearances as much as anyone but sometimes chooses to stay the course.