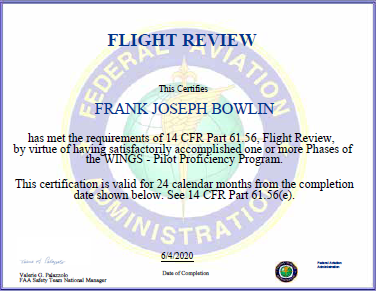 You’re an active pilot, right? You even get some training now and then beyond what you’re required to get. But, if you spent a little energy— and usually no more money you might be able to take most or even all of what you’re already doing and let it, for example, count as the flight review you’re required to get every two years. If you’re not doing that, perhaps you should. And, if you did, your insurance company might even offer you a discount. (Some do; some don’t.)

Simply put, WINGS is an FAA recurrent training program, a continuing education program, that isn’t mandatory, but does have some benefits. Here’s how the FAA introduces us to WINGS: “The objective of the WINGS Program is to address the primary accident causal factors that continue to plague the general aviation community. By focusing on this objective, we hope to reduce the number of accidents we see each year for the same causes. As you will see, it is not a simple ‘Award’ program but is instead a true proficiency program, designed to help improve our skills and knowledge as pilots. 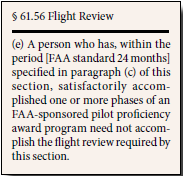 “The WINGS Pilot Proficiency Program is based on the premise that pilots who maintain currency and proficiency in the basics of flight will enjoy a safer and more stress-free flying experience.” You tailor your WINGS participation according to your preferences or certifications. For example, a fixed-wing the pilot might not have any need for rotary wing training, so you set up your profile accordingly. You start by setting up that profile and creating an on-line account on FAAsafety.gov.

Most WINGS explanations give it to you starting at the top and working down from there, and that’s often confusing. So, we’re going to start from the bottom, then go back to the top-down view. As far back as many of us can remember the FAA has required both knowledge and skills. To gain any new capabilities or ratings on your certificate, you’ll generally need to pass a knowledge test and then a flight test. WINGS works much the same way, requiring both knowledge and flight activities (but without the examiner at the end). So the fundamental building blocks of WINGS are knowledge activities and flight activities. To accomplish anything meaningful in WINGS, you’ll need credits from completing some of each. Each of the explicitly defined knowledge and flight activities fit into a broad Topic area, and that broad Topic area is shared with many other activities. So, while you might attend a seminar that would give you credit for completing a Knowledge Topic #1, there are probably dozens of other seminars, webinars, and courses that also give you that same credit for completing Knowledge Topic #1. In this way, you can tailor your activity to suit your interests. Now that we’ve covered those building blocks, let’s switch back to the more common top-down explanation for the big picture.

WINGS is accomplishment focused. You can make those accomplishments at a Basic, Advanced, or Master level. Within each level, you will work on Phases. If you’re just starting out, you’ll want to work on Basic WINGS Phase 1. With that completed, the obvious next step is to work on  Basic WINGS Phase 2 and so on. You’re tempted to think of these serially, where you have to go through all the Basic WINGS Phases, then Advanced, and finally on to Master. You’d be wrong. Although that’s a reasonable approach, and the way that most pilots do it, there’s no prerequisite to do things in any order, with one exception. To complete an Advanced or Master Phase, you must have also completed a Basic Phase in the previous 12 months. Think of completing a Basic Phase as a gate to an Advanced or Master Phase, so long as you complete that within the next 12 months. In fact, some of the Basic activities also count toward Advanced or Master credit, making it possible to earn both a Basic and Advanced or Master Phase at the same time. So, you could complete a Basic Phase and within the next 12 months fill in what you need for an Advanced or Master Phase (perhaps even just a knowledge Topic you could complete online) to get another Flight Review only a year later. We’re also tempted to think of this as the Basic WINGS Phase 3, with specific and exacting requirements for that particular Phase. That’s also incorrect in that once you complete the necessary knowledge and flight activities, which are usually three knowledge credits and three flight credits, you have completed a Phase. Whether that’s Phase 1, or even Phase 5 depends on how many Phases you’ve previously completed.

We all know of the requirement in §61.56 to face an instructor for a Flight Review. This is a train-to-proficiency event that can’t be failed. That’s a nuance. If you don’t meet the instructor’s requirements, you might not be signed off for the flight review, but this “lack of success” means nothing unless you time out on your two years and can’t fly. Nonetheless, many of us approach this flight review under the watchful eye of an instructor with the same joy and excitement with which we approach a checkride or even a root canal. That is to say, we work ourselves into a near panic and seldom perform at our best. Obviously, this is pointless since, as we discussed, this flight review is considered train to proficiency and can’t be failed. Earning a flight review through WINGS further reduces that stress. It’s still train to proficiency and can’t be failed—only earned or not earned—but the more granular nature and the structure of WINGS overall, make it less stressful. And, you might even complete a Phase and get the flight review credit, or nearly so, without even trying. I used to be completely WINGS ignorant; I’d never really dug into WINGS until recently. My aircraft insurance requires me to attend a formal recurrent training every two years. Years ago, the training center I attended told me that I’d also be earning a flight review through WINGS. So, I didn’t think about flight reviews, instead focusing on getting my recurrent training every two years and just assuming I’d also earn a flight review through WINGS. That was a mistake. Not all training centers offer such WINGS credit. (Most could, and probably should, but WINGS understanding isn’t as widespread as it should be.) The training center I selected this year doesn’t have the authorization to offer WINGS flight activities, which I didn’t realize until just a couple weeks before attending and before my flight review expired. That was, of course, during the whole COVID-19 lockdown. Thus, I needed to investigate WINGS in a hurry. With help from Mark Kolber, our regs guru and a FAASTeam member, I did that, then enlisted Mark’s expert guidance with this article. I renewed my CFI certificates in summer 2019 through an on-line flight instructor refresher clinic. To my surprise, that clinic provided all the WINGS knowledge activity credits I needed for another Phase. Also, last year, in the off year between insurance-mandated recurrent training, I got an IPC. I discovered that the instructor gave me credit for that flight activity. To my surprise, without even trying, I had about 95% of the tasks and credit to earn a WINGS Phase. All I needed were a few flight tasks that went beyond the IPC. In about half an hour of flight with a willing instructor— with both of us wearing face masks—I’d completed those flight tasks to finish the needed flight activity. Before I even got home from the airport, I had a certificate for a WINGS flight review.

Along my little WINGS-learning odyssey to a flight review, I hit a snag. I’ve got multiple e-mail addresses. The key the WINGS on-line system uses to correlate an instructor giving somebody credit, with that pilot’s WINGS account, is the pilot’s e-mail address. My instructor had been using an address that was different from the one I used with WINGS. Thus I didn’t have the credit even though he insisted he’d given it to me. Once we sorted out that little hiccup, all was well. This article is not intended to be a tutorial. Instead, it’s intended to sufficiently introduce you to WINGS that you’ll start using the program. There’s a lot of useful information out there, much of it within the WINGS website itself. Also, I found that website to not be particularly user friendly; it required a lot of poking around until I learned my way through it. So, don’t expect to create an account and get right to work. You’ll need to spend some time at FAAsafety. gov before it all makes sense. Once you do, though, it should be a rewarding experience.