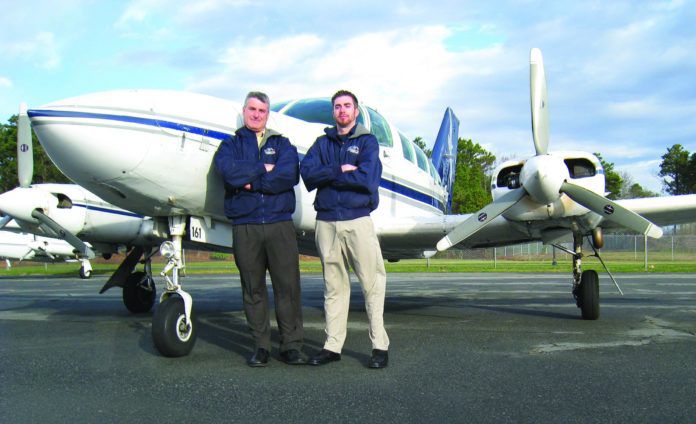 It used to be that newbie, commercial pilots started out in the trial-by-fire world of check-hauling and freight-dogging in piston twins. The pilots that survived (and the majority of them did) understood the realities of single-pilot IFR at a visceral level. Those core skills were the foundation on which airline and jet-charter careers were built.

Those days are largely gone, and we’ve heard from many sources about a lack of basic competency showing up on ATP and Part 135 checkrides. Can we train instrument experts without them slogging it out in the IFR trenches?

Cape Air is a short-haul airline that runs over 60 Cessna 402s (primarily around New England, Florida and the Caribbean) that may have pulled this off. We went inside their operation to find out what parts of their success you can steal for your own IFR survival.

Dave Bushy, COO for Cape Air, told us there are three components to Cape Air’s pilot plan: Good genes, good tools and good training. For Cape Air, “good genes” means pilots coming out of accredited aviation universities and Part 141 training. These are the UNDs, Embry-Riddles and Daniel Websters of the world.

“With Part 61 pilots we had, I think, greater than 30 percent attrition in training.” Bushy told us. “Now it’s less than five percent.” We wouldn’t have expected such a dramatic difference. Delving deeper, we heard from several Cape Air staff that the key items pilots from the universities bring in are a so-lid cockpit discipline, and an in-depth understanding of systems, procedures and the regs.

Evan Cushing, a Cape Air Fleet Specialist, expanded on both these points. “I can show a decent pilot a few pointers about how to make flying an NDB approach much easier … but taking someone who has been flying around for the last several years without ever audibly identifying a navaid, or who gives cursory looks at approach plates for briefings, and making them fundamentally sound all of a sudden, presents a much bigger—and often insurmountable—challenge.”

Cushing says some trainees challenge whether it’s really necessary to know systems and procedures in such detail for a relatively simple plane like the 402, which lacks even pressurization. His response: “It’s not that specific detail that’s important. It’s that details are important.”

This theme became takeaway number one: Knowing the minutia—of the airplane, of the IFR system, of the cockpit procedures—mattered in performing to ATP-level standards every time. So did coming into the cockpit with the right attitude. This combo is what Cape Air looks for most in its interviews. It’s so much the priority that they don’t even do a simulator test for candidates any more. If incoming pilots have the fundamentals and the attitude, then most any other deficiency can be fixed during training.

Go With the Flow

Almost everything the Cape Air pilots do in the cockpit has an associated flow. Bill Cush, Fleet Manager for Cape Air’s Cessna 402s, put it bluntly: “We pretty much tell them if they don’t know their flows on the first day to not bother showing up.”

A flow is a sequence of actions in the cockpit the pilot does without consulting a checklist (see sidebar). Once the flow is complete, the pilot grabs a checklist to ensure he didn’t miss anything. Why bother with the checklist when you’ve done the flow 2000 times? Even the high-time guys told us that sometimes, somehow, they still miss something. And remember, these folks were all selected to be detail-oriented.

The flows bring both speed and standardization. The hope is those will engender efficiency and safety, and that seems to be the case. The trainees review flows in the classroom, in front of a fullsize wall photo of the 402 cockpit, and in the simulator. Cape Air actually does little of its training in the 402 simulators they own. The non-motion machines are basically there to practice the normal and emergency flows while keeping the blue side of the AI upright. As soon as the flows are solid, it’s out to the airplane.

Takeaway number two from this research, and what Cush thought was most important about Cape Air’s training, was to build and use flows for IFR. “If a few guys were all in one airplane and they all did things a bit differently, I’d have them get together and develop a set of standard flows and all agree to use them. That would make them the safest they could be.”

Cush and others did exactly that with the Cape Air’s cockpit books. For years, the flows were there, but the checklists were tattered Cessna quick-refs. Now all the pilots fly with two books: The Normal Procedures Handbook (NPH) and the Quick Reference Handbook (QRH). Holding up the NPH, Cush said, “This, I hope they use this every day.” Motioning to the QRH, he added, “This, I hope they never use.”

That’s because the QRH is all abnormal and emergency procedures, reorganized for real-world use. Memory items are in a red box. Page flipping is kept to a minimum and the order of the pages is thought out such that what you probably need next is on the next page. So, engine failure on takeoff is promptly followed by the profiles for a single-engine approach. The NPH holds all the normal flows in checklist form for review after the tasks are done. It also puts all the commonly-needed info, such as the custom VFR arrivals they use into Boston Logan airport, in one place. Both books are the trainee’s bibles through the program.

Training is usually 13 hours of air time in the 402, if the training regimen is kept up. Sometimes business is booming too much and there aren’t enough planes to train in so it takes longer. The whole training program, however, is 21 days long. That’s a shocking number when you consider an airline pilot taking an initial type rating in a transport-category jet would typically see a two-week program or less.

At the end, the trainee takes the Part 135 checkride in the 402. If he or she lacks an ATP, then that ride is also an ATP checkride. New line pilots fly with an experienced captain alongside until they’re comfortable and ready. The last step is a “sit-down talk.”

Bob Shore, current chief pilot for Cape Air, told us, “Before anyone can start as a solo pilot they get a briefing. We sit them down and tell them how, in the day-to-day world, people are going to rush to try and make decisions for you. We try to take away the possibility that they feel pressured.”

More Tips from the Pros

Query any of these folks for specific flying tips, and you won’t get any. Not right away. But hang out for a while and they start popping up everywhere. Sitting in the back and still at the ramp while Cushing was right-seating with a new pilot, we had an engine that had just been started idle low and quit. The new guy was a hair too late in reacting to save it. Cushing leaned over: “The moment you see that manifold pressure rise, that’s the time to give it a bit more throttle.”

How do you handle the rapid-fire workload of a short flight from Hyannis to Nantucket when IFR? Get the Nantucket ATIS while still on the ground at Hyannis—by cell phone if you have to. This is part of a larger strategy of “relandscaping” the peaks in pilot workload to dump some of that work into low-demand times. Shore told us, “You need to rearrange your priorities so prep is number one. We have a lot of short flights so you must have things set up. Ask yourself, ‘What’s going to facilitate my flight? Where am I going and how much time do I have to prepare?'”

Shore was also one of the pilots who came to Cape Air from the heavy-iron world. He used to be a Chief Pilot for American Airlines. He pointed out that the Part 121 guys have trouble at first with the single-pilot experience. “They keep looking to their right.” Shore flew the line at Cape Air for a year and had that trouble himself. “When you lose an engine in the Part 121 cockpit, it’s all CRM. Here I had to sit in that [Cessna 402] seat for a while and think to myself, ‘How am I going to make this work?’ “

Part of one flow is to check the weather again at the final approach fix. The ILS Rwy 4R at Boston is notorious for having winds aloft out of the southwest but a light east wind at the surface. Lead Check Airman David O’Connor told us he loves asking pilots in training, “Which way will the glideslope needle move when the tailwind goes away?” They often get it wrong. Good pilots can still salvage the approach, but corporate culture around here is being the kind of pilot who anticipated the event.

The new pilots learn to ratchet back on their control inputs on the ILS, as many over-control. Many fall victim to leveling off when they break out in true low visibility for the first time in their flying careers. They also stop looking at the needles. “The RAIL is a wonderful beacon,” Cushing warns, “but a terrible guide.” Check that you can see paint, pavement or lights and then look back down at those gauges.

Another tip was to “always build your nest the same way,” meaning you should take the time to arrange the items and resources you use in the cockpit so they are all exactly where you expect them to be.

How much do these pilots use the autopilot? Not much, and rarely on approach. “I think it’s fine if someone is using a coupled autopilot at the end of a long day. That’s smart,” O’Connor said. “But I think hand-flying makes you more engaged in the flight.”

There’s a positive peer pressure around that raises everyone’s performance. Several pilots told us the company frequency is important to doing their job well. Hearing, “You’re gonna have to go left on the LEB ILS today,” makes a difference both in performance and not feeling so isolated. Speaking of corporate culture, all the qualified upper management fly regular lines about once a week during the busy summer.

In 2009, the airline logged over 65,000 hours of flight time on 125,000 flight segments. That math is pretty simple: They’re running short-hop flights, often in a high-workload IFR environment, and almost always single pilot.

If their experience says that the detail-oriented, flow-following pilot is the safest and most efficient way to go, there’s probably something to that. The laundry list of other IFR tips are probably worth noting too, considering the guys who passed it along might log 1000 hours of air time a year. No one can put real-world IFR experience in a bottle. But emulating the right attitude and battle-tested procedures can certainly help.

Jeff Van West struggles to remember that that detail does matter in every issue of IFR .