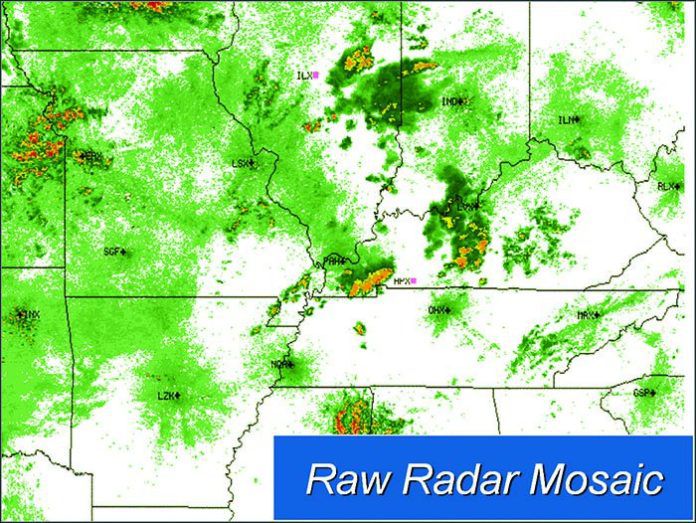 Many pilots understand that the NEXRAD image they see on datalink weather doesn’t exactly show where the rain is falling at that moment because of the delay in broadcasting the information up to the satellites and down to the weather receiver.

What fewer pilots understand is that the NEXRAD image they see doesn’t really “exist” at all. The mosaic is a piecing together of individual radar returns from dozens of stations, each of which is on its own update cycle. So even the starting data—a completed scan from each station—represent different snapshots in time. The difference is only a couple minutes at the most, but it’s still a difference. To help deal with this there is some processing on that raw data to try and extrapolate forward or backward in time to get everything on an even playing field. That’s just one step in massaging the data to create something that’s more useful than it is a faithful representation of what the radar sites saw.

The individual stations pick up a lot of false returns. Ground clutter, reflections off a temperature inversion, birds and even sunlight at low angles can show up on radar. The top image of the three below shows what a mosaic of all this raw data looks like. It appears to be a lot of rain, but it isn’t. It’s junk.

The middle image shows the mosaic after the automated quality control has cleaned it up. Much of the noise is gone, but anything that’s potentially storm material is supposed to be retained. Note the ring-shaped areas near the Illinois-Missouri border and just north of Kentucky. These are classic for false returns near a radar site, but they made it through the automated cleanup as possible storms.

The bottom image is after a pass by humans to remove the last of the false returns. The Missouri and Kentucky rings are gone, as well as some other spurious data that doesn’t jibe with other weather data, such as clouds or METARs. This bottom image is what goes out to FBOs and aircraft as WSI’s latest NEXRAD image.

Some features, such as gust fronts, are often lost in this process. That’s where a check of individual NEXRAD sites can be helpful.