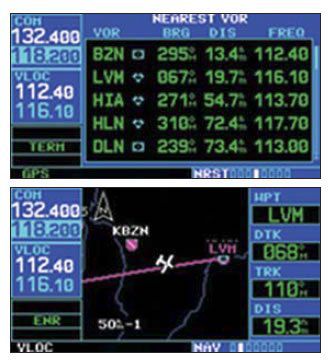 Like many of our clinics, this one started with a reader’s letter. This particular fellow was a flight instructor who had to go “old-school” with a Private student in a Diamond DA20 equipped with a Garmin GNS 430 GPS. They were following V86-365 from the Bozeman VOR to the Livingston VOR at night through the mountains. Happily motoring along on GPS, they ran into a snag with the bend in the airway.

With two VORs, this is a no brainer: Track R-110 from BZN on one Nav and dial up R-246 to LVM on the other. When the second Nav needle centers, turn left and continue. It’s a bit tougher with one GPS/Nav. You can’t load the airway on a GNS 430 and the bend had no fix name associated with it on the VFR chart. They ended up flying the right distance outbound from BZN via the VOR part of the GPS and then using GPS direct for the leg to LVM.

“Although it is good training to be-able to use one CDI to tune in and identify multiple VORs and find intersections, it was a little overwhelming for my Private pilot student. Not to mention it can be dangerous to be off course, low in the mountains at night. I knew there was a way to put in that intersection but I could not remember. I was talking with a fellow CFI and he said that the intersection is on IFR low-altitude en-route charts. Then the light went on in my head from my IFR training. The intersection is called ZUBLI. Last night I did another VFR night cross country with another student without a hitch.”

The experience brought up two good questions: Why aren’t these intersections on the VFR sectional chart and is there a way to put the intersection in the GPS if you don’t know the name. Frankly, we had to do some checking to make sure we had the story straight on the first question. The second one is just a matter of how hard you want to work to do it “new-school-cool.”

The subtle clue is that ZUBLI is in parenthesis on the en route chart. These parenthetical fixes are Computer Navigation Fixes (CNFs). CNFs have been around since 1998, and were added specifically for GPS navigators to deal with mileage breakdown points on airways, which were previously charted with only a small “x” at the bend. On sectional charts, there’s not even an “x.”

CNFs were created specifically for navigation systems like GPS that draw each turn point from a database. So if you’re planning to fly a route like this section of V86-365 with a GPS (panel-mount or portable) you’ll need to take a quick peek at an en route chart to get the CNFs to add to your flight plan. This is a great use for online chart viewers such as skyvector.com or runwayfinder.com, where you can toggle quickly between VFR and IFR charts for the same point in space. The GPS route would be BZN-ZUBLI-LVM and on from there.

Remember that CNFs are strictly for navigating bends in airways. You’ll never be asked to report or hold at one, and you shouldn’t use them in flight plans.

If you didn’t catch the airway bend before you launched and don’t have an en route chart with you, there are a couple options in the air. The Nearest group of your GPS is a good solution: You could fly GPS out from one VOR on the first leg and and show the bearing to the other VOR on the Nearest VOR page. This would be continuously updated, and when the bearing was correct for the next leg, you could select it and go. Some GPS even show a VOR or waypoint bearing on a main navigation page.

Another trick would be to head outbound on leg one and call up the Nearest intersection page. The CNF should show up near the top of the list and be getting closer. A little logic (and maybe an estimate of distance off the sectional) should leave you pretty confident which intersection is the CNF you need to add to your flight plan.

To do a combo of VOR and GPS navigation and make the turn visually, you could fly outbound on the first VOR so that signal was driving the CDI in the aircraft, and then do a direct to the second VOR, but on a course of the desired inbound heading. This would paint the inbound radial on the moving map and you could turn toward the second VOR when you intersected that radial.

Yet another method is creating a user waypoint defined by the intersection.

Of course, all this wrangling around to try and make the single GPS/VOR box do what’s mind-numbingly simple with two creaky Narco VOR receivers is pretty funny. The whole point would be moot if CNFs were printed on sectionals, but they aren’t. Really now, no one needs CNFs when you’re flying visually.

Uh, except maybe for some lonely CFI and his student in the mountains of Montana at night, trying to find a fix that just isn’t there.