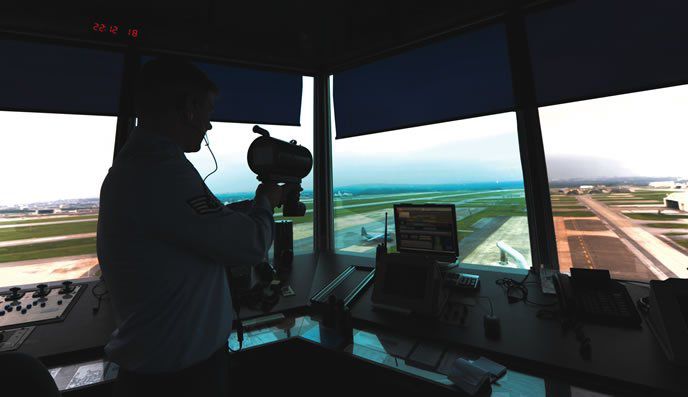 Part of training in the air traffic control profession is learning to recognize patterns in the flow of aircraft. Knowing what to expect from our traffic makes it all the more obvious when something doesn’t look or feel right. It’s not a “spidey-sense” or anything, but it can help us recognize developing situations more quickly.

I was up in the tower for the afternoon, working Ground and watching a friend train a new controller on Tower. The trainee had his hands full with a pattern full of Skyhawks and IFR practice approach traffic. In between issuing taxi instructions and clearances, I happened to look at the radar scope. There was a Skyhawk on short final, and a helicopter about two miles in trail. Something strange caught my eye. Directly between them appeared an unidentified primary radar target.

“Hmm, that’s funny,” I thought. Our radar’s known for generating targets out of things other than aircraft, like large trucks crossing over bridges in its view or particularly dense areas of precipitation. Usually they’ll drop off after a couple of sweeps. This one wasn’t. It held course directly between the Skyhawk and the helicopter.

I looked out the window. The Skyhawk was touching down, and directly above him—maybe 800 feet—I spotted a Piper Cherokee! “Hey, guys,” I asked my friend and her trainee, “was that Skyhawk part of a flight of two?” “No… why?” my friend replied. I pointed out the window. “Then who’s he?”

After a moment of shock, my friend overrode her trainee on the frequency and got everyone out of the Cherokee’s way. I grabbed my binoculars as the Cherokee passed the tower, eyed the guy’s call sign, and told my friend. She tried reaching out to him on frequency, but got no response.

While she handled her other airplanes, I pulled up the sunshades, aimed the light gun and gave the Cherokee a steady green light. He landed without further incident and taxied to the ramp. Within a few minutes, the pattern was back to normal.

The pilot called the tower. I asked him straight out, “Man, I’m curious. Just tell me what happened.” He’d been flying VFR on an airway about 15 miles north, when suddenly both of his fuel gauges dropped to zero. He then tried to reach our approach control, and they acknowledged his call sign. Before they could give him a squawk, his radios and transponder quit working and his panel GPS died. While orbiting around, troubleshooting, he also got turned around and confused our airport for another one, 50 miles away.

I’m no A&P, but the whole thing smelled of alternator failure. He made it through, though, and wound up with a great example of why it’s good to pack one’s flight bag with a spare radio and a spare GPS. I, for one, will also be paying a lot more attention to unusual targets.