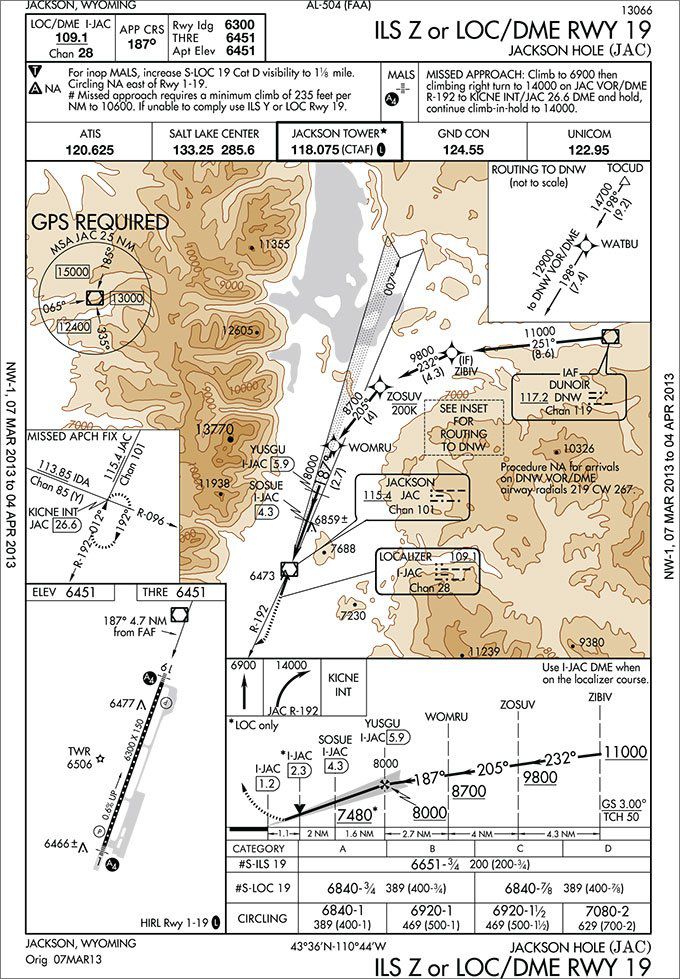 A flying friend of mine likes to say that you know you’re into something interesting when you have to sign a waiver beforehand. In the IFR world, I tend to think of approach procedures having an alphabetical suffix, such as RNAV (GPS) Z RWY 01, the same way. Whenever you see one of these, something is probably going to be interesting about the procedure, and the tricky part is figuring out what it is.

A suffix is added to a procedure name when there are multiple straight-in approaches of the same type to the same runway end. The first question that comes to mind might be “now why would they go and do a silly thing like that?” The goal in procedure design is to permit approach utilization by as many aircraft as possible, but sometimes the optimal design may have equipment or aircraft performance requirements that limit its use.

When the optimal procedure is not usable by all aircraft, a second approach will be designed that will be usable by more aircraft, though usually through higher minimums. Let’s look at situations where this might happen, with a particular interest in the hybrid GPS/ILS approaches that have started to appear.

Multiple Personalities
The most common instance where a runway end is served by multiple approaches of the same type is when there are both GPS minimums and RNP minimums published—both RNAV approaches. This is often the case at major airports served by the airlines or high end business aircraft. Since few GA aircraft are capable of flying RNP approaches, the GPS approach makes the runway available to more aircraft. Less common are cases in which there are multiple GPS or ILS approaches to the same runway end and require some analysis to figure out why.

For instance, LNAV minimums have a significantly larger obstacle evaluation area than LPV minimums, but are allowed to have a steeper glidepath angle and larger offset between the final approach course and the runway than LPV minimums. When the requirements to design an LNAV approach to a runway would result in disallowing an LPV approach (or couldn’t offer optimal minimums), a separate LPV-only procedure might be designed. When this happens, the “Z” approach will have the LPV minimums, and the “Y” approach will have the rest.

Mixing The Old With The New
A relatively new situation where you will find multiple approaches of the same type to the same runway end are ILS approaches for which GPS is required. These procedures feature GPS-based routing leading to a conventional ILS final segment. One such example is the ILS Z or LOC/DME RWY 19 approach into Jackson Hole, Wyoming (JAC).

Uh, what? Considering that the obstacle clearance requirements and minimums for ILS approaches are practically identical to GPS LPV approaches, why would the FAA develop GPS-based routing to an ILS final rather than to a plain old LPV final?

To complicate matters, there actually are LPV minimums and GPS-based routing on the RNAV (GPS) Z RWY 19 approach which are identical to those on the ILS Z approach. In addition, there is an ILS Y or LOC RWY 19 approach that provides a non-GPS routing and higher minimums than the ILS Z approach. Unable to figure out what the heck is going on here, we went straight to the source.

It turns out that this approach design is both pragmatic and forward thinking. In the GA world where the only barrier to the latest and greatest avionics is single-unit cost, we have started to take WAAS-based approaches, such as LPV, for granted. However, when it comes to airline and business aircraft, avionics are more tightly integrated into the aircraft, and can be cost or time prohibitive to upgrade. Although most have IFR GPS capability, it’s common for them to not have WAAS capability, and no immediate plans to upgrade. This was one of the design considerations for the hybrid approach into Jackson Hole.

With the existing ILS approach, the minimums were 700-2. The LPV minimums could get you down to 200-3/4, but are unavailable to aircraft without WAAS capability. The hybrid ILS Z approach was designed to enable the flexibility of GPS routing with the precision of an ILS and to be available to any aircraft with a basic TSO-C129 IFR GPS and ILS receiver.

Some of the benefits of using GPS routing to an ILS rather than conventional navaid-based routing include designing terminal routes for noise abatement, reducing flying miles by eliminating course reversals, and allowing locator outer markers to be shut down, thus saving on maintenance expenses. Additionally, it’s no secret that the FAA’s long term plan is to gradually shut down underused VORs, which will eliminate many navaid-based transitions to ILSes.

This is why this design is the “wave of the future,” according to the FAA.

That actually doesn’t sound half-bad, but what’s it like to fly one? We went to Garmin to find out what to expect from their navigators on these approaches. On navigators with an ILS receiver, the navigator will automatically switch from GPS to VLOC mode when the aircraft gets close to the localizer course. Some navigators, such as the G1000 will automatically load the ILS frequency as the active frequency, whereas others, such as the GNS 430/530, will load it as standby, requiring the pilot to manually switch frequencies. On navigators without an ILS receiver, such as the GPS 400/500, the pilot will need to manually load the ILS frequency, monitor both the localizer and GPS course, and switch guidance when receiving localizer guidance.

Do Your Homework
Approach procedures featuring a GPS transition to an ILS final segment exist, but are not widely deployed right now. However, it sounds like we can expect to see more of them in the future. Most aircraft are equipped with an IFR GPS these days, but if not, be sure to look for “GPS Required” in the procedure notes, or near an approach transition, on ILS approaches. Also pay attention to the different symbols for a navaid-based fix (the triangle) and the GPS waypoint symbol.

The moral of this story is that any time you’re assigned an approach that has a suffix in the procedure name, take a really good look at it before starting the approach. Try to figure out why that suffix is there and what it means to your equipment. It’s much better to find out early that you can’t fly a procedure than when you’re half way through it. The same goes for alternate planning as well. Don’t let your backup plan be based on a procedure that you’re not equipped to fly.