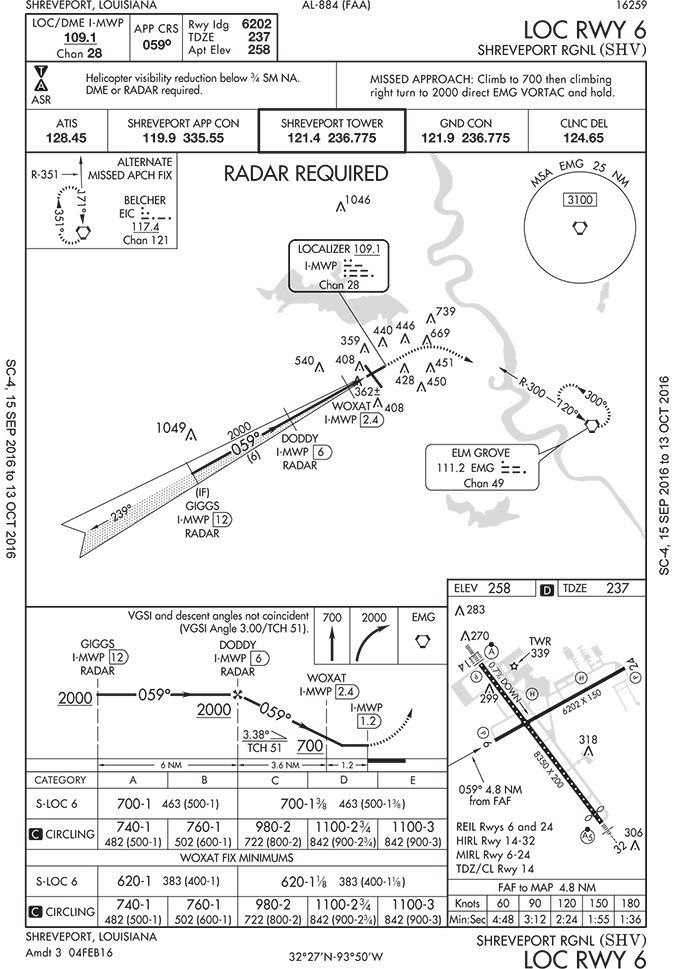 I Wanna Fly With 10 Minibars

Minibars are found in hotel rooms; atmospheric pressure is measured in millibars.

Uhh, oops. Bet it was an autocorrect that we didn’t catch. (Ever try typing an article about HSI use? HIS use doesn’t make sense.) Nonetheless, it’s obviously wrong, but at least it’s amusing.

They Gotta Tell Ya

I’m working on my CFII and have a question. I’m flying a /U Mooney on the Shreveport Regional (KSHV) LOC Runway 6 approach, so no DME. Radar is required. Is ATC the only way for me to identify DODDY, the FAF? Do I have to ask the approach controller to tell me when I’m at DODDY to start the timer?

In short, yes and yes.

Note that both GIGGS and DODDY are shown with the notation “RADAR” below them. With the “RADAR REQUIRED” statement, you know these are identifiable by radar if you don’t have any other way to identify them (DME, GPS).

Note also that WOXAT does not have the RADAR note—it’s optional. You can fly the approach without WOXAT. But if you can identify WOXAT, with ATC’s help or on your own, you can go a little bit lower. (In minimums section; not shown.)

This is somewhat unusual, but not unique. Before I flew this approach to mins for real, I think I’d try it on a busy day in VMC to see how diligent Shreveport Approach Control is at calling out those fixes. Either that, or I’d have a careful eye on the GPS-enabled tablet I was using for supplementary purposes (wink, wink, nod, nod).

Good luck on your double-eye, Daniel. It’s a rewarding accomplishment when completed. —FB

Regarding your answer to a reader’s question in “How High and By Where” in the Readback section in June’s edition, I noticed that the TERPZ FIVE departure at KBWI is no longer. It has been superseded by the TERPZ SIX, where top altitudes now vary by transition and are a lot higher than 4000.

Perhaps others found the 4000 top altitude confusing, given the 11,000 restriction at TERPZ. The new version is also limited to turbojets, which makes sense given the climb performance required for some of the restrictions.

In the June issue, a reader had a question regarding the TERPZ FIVE departure at BWI. Your response in a lost com scenario was that you should climb to TERPZ at 11,000 then climb to your filed altitude after 10 minutes. I disagree. In the regs, 91.185 offers clear altitude guidance in a lost com situation. It is simply the highest of 3 altitudes—the altitude in your clearance, the altitude you were told to expect, and the highest IFR altitude. No mention is made about waiting for 10 minutes nor about a filed altitude.

For example: You’re often told to expect your filed altitude after 10 minutes on departure. This keeps you below arrivals until you’re far enough out to minimize conflicts. If you lost com on rotation and immediately started climbing to your filed altitude, you’d undoubtedly cause all kinds of havoc.

Just Use Your Cellphone

We are all using GPS and are concerned about GPS system failures. Many years ago, I flew over my friend’s home using my cellphone and his street address. Most of the times I don’t have cellular reception at 5000 feet but returning from Sun’n Fun I received a text message at 10,000 feet.

Supplementing GPS with cellphones would not help us do an IFR approach but would tell us where we are so we could navigate to a suitably equipped airport. Also, if we know where VMC is (satellite wx, ADS-B, etc.) we could fly in that direction to get out of the soup.

Of course, radar would work, too.

Andr, this one won’t work.

Cellphones use both GPS and triangulation from received cell sites to get a position. When they are successful, that position is reasonably accurate and would work in a pinch. However, by design, cell signals are not radiated up into the atmosphere and are “steered” very deliberately down low to cover ground-based cell phones. Of course, radio being what it is, that “steering,” is imperfect and you can sometimes get a momentary signal when airborne as you’ve seen.

One of many reasons that steering is used is to deliberately prevent airborne cell phone use because it would tie up a cell channel on not just a few cell sites, but perhaps a hundred or more, severely limiting the system’s capacity.

Now, if you can convince the cell phone companies to solve all those problems and allow vertical propagation of the radiated signals from the cell towers, well, that might be a usable GPS alternative.